Drought has major impact in North America and worldwide

Americans are enduring not only record heat but also near-record dryness in the central region of the country. The impact of the extraordinary weather the U.S. has been experiencing in 2012 will be felt globally and well into next year. Some winners and losers are listed. 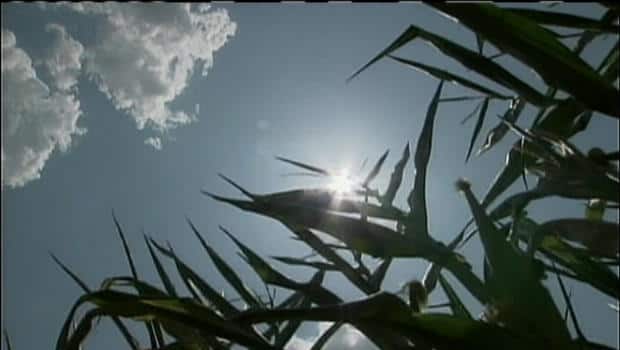 8 years ago
2:09
Scientists say July was the hottest month ever recorded in the U.S., the 14th straight month of above-average temperatures 2:09

The area of the U.S. in severe drought or worse increased slightly over the past week, according to data released today in the U.S. Drought Monitor report, and the economic effects of the extraordinary weather are expected to be felt globally well into next year, at least.

The period of excessive heat and dryness on the Plains continues, expanding the severe drought areas in Nebraska, Kansas, Oklahoma and Texas.

Americans are enduring not only record heat but also near-record low precipitation levels in the central region of the country.

There was some relief in the eastern half of the midwest, especially Ohio, Indiana and Kentucky, as another week of rain led to improved conditions.

The area of the U.S. in moderate drought or worse decreased, according to the report, but by less than a point.

Most of the prairies have had average to extremely high precipitation, while the southeast corner of Manitoba has been unseasonably dry.

In Ontario, the southwest corner of the province has had favorable growing conditions but the area west of Ottawa has had some of the driest conditions.

With the unusual weather in parts of Canada, and about 62 per cent of the contiguous U.S. experiencing moderate drought or worse, along with record heat, the impact on food and agriculture varies.

Here's a look at some of the summer weather winners and losers, both inside and outside the U.S.

American farmers had planted the largest corn crop since 1937, only to see it become the crop hardest hit by the drought and heat.  In its August 7 Weekly Weather and Crop Bulletin, the U.S. Department of Agriculture (USDA) reports that the corn crop continues to deteriorate, with just 23 per cent of corn still in good to excellent condition. At the same time last year, that number was at 60 per cent.

Nevertheless, the USDA expects the 2012 corn harvest to be the third biggest ever.

The price of corn reached record levels on July 20, with corn futures increasing more than 50 per cent at the Chicago Board of Trade in just two months. Since then, and after some rainfall in parts of the Corn Belt, prices have dropped three per cent.

That will put upward pressure on the prices of many processed foods, but because of forward contracting and consumer resistance, price increases are not expected to kick in until next year. Ethanol, which uses about 40 per cent of the corn harvest, should also become more expensive.

Record heat  in the U.S.

These are new records for the contiguous U.S., where records have been kept since 1895:

Consider Russellville, Ark., where for 24 days straight the temperature has reached at least 100°F. Before this year, the record had been 14 days. Friday's forecast has the high below 100 F, ending the record-shattering stretch.

It's been a very dry year in the contiguous U.S. but without national records. The May to July period was the twelfth driest on record. "The central regions of the country were hardest hit by the drought, where ten states had three-month precipitation totals among their ten driest, including Nebraska, Kansas, and Arkansas which were record dry," the NCDC reports.

Meanwhile, California had its fifth wettest July on record.

Rainfall records do tend to be more local than national or statewide. While Bristol, Tenn., had record-high precipitation in July, at the far side of a neighbouring state, in Joplin, Mo., there was record-low July precipitation.

Wheat prices also hit highs in July but have dropped six per cent since then.

Corn and other grain commodity prices affect the price movements for wheat, by influencing farmers' planting decisions and also because they are interchangeable crops, especially as animal feed.

A drought in Russia is also a significant factor. Wheat production from Russia, Ukraine and Kazakhstan — which normally supplies a quarter of the world's wheat exports — is expected to drop 30 per cent from last year, according to a Reuters poll.

In the U.S. about half the spring wheat has been harvested and the amount in good or excellent condition had been just three points below last year. The early start to the planting season means the harvest is 35 points ahead of the average for the last five years.

Winter wheat, which is over 88 per cent harvested in the U.S., has given very good yields, with high quality, Sam Miller, of BMO Harris Bank told the media during a Wednesday conference call.

In Ontario, winter wheat has been "a darling crop for Ontario farmers," David Rinneard, the National Manager for Agriculture at the Bank of Montreal, said during the conference call.

Soybeans - suffering but may improve

The U.S. soybean crop that is in good or excellent condition is 32 points below what it was at this time last year. It has come too late for the corn crop in some of the driest parts of the U.S., but the recent rainfall and more in the forecast could help the soybean crop to recover.

Prices reached records highs on July 20, after increasing about 30 per cent in two months, but have fallen nine per cent since then.

The share of both rice and peanut crops that is in good to excellent condition is 26 points higher than at this time last year.

The oat harvest is especially early, 35 points ahead of its 5-year average, and oats futures prices are up about 35 per cent since the end of May.

The share of the cotton crop in good to excellent condition is 11 points better than this time last year. In parts of Texas, the heat and dryness has stressed the cotton crop so much that it has already been plowed under. Cotton prices are down about 25 per cent from a year ago, due to a large global inventory and falling demand as a result of slowing economic growth.

The drought is having a serious impact on the livestock sector in both the U.S. and Canada. In the U.S., just 16 per cent of pasture and ranch land are in good or excellent condition compared to 39 per cent at this time in 2011. In parts of Ontario, hay fields are also scorched. Hay prices are two to three times higher than normal, according to Rinneard.

And the steep increases in the prices for corn, wheat and other animal feed crops hit livestock producers especially hard, since animal feed is their major cost input. This "will squeeze what are already very thin margins," Rinneard said. Dairy producers also depend on hay, corn and wheat for feed.

The high feed prices are forcing many producers to cull or even liquidate their herds, especially cattle, in order to reduce costs and improve productivity.

That leads to a short-term oversupply of meat and meat products, putting downward pressures on prices, a double whammy for livestock producers.

The reduced supply in 2013 should then put upward pressure on meat prices. The USDA forecasts these price increases:

Fruits and vegetables - generally a good year but with local variation

Many factors beyond heat and rain influence how fruits and vegetables are doing. When they were planted, irrigation, soil quality, bugs and the produce variety are all important determinants. The situation will vary from crop to crop and even from one farm to one nearby.

The overall price increase for fruits and vegetables in the U.S. for both 2012 and 2013 will be just 2-3 per cent, according to the USDA.

Despite the drought, The Register-Mail newspaper reports that in its area of Illinois, most of the farmers' fields are loaded with produce, ripening is ahead of schedule, yields normal to above normal, and there is even an excellent sweet corn crop.

(Sweet corn is typically irrigated, unlike corn grown for animal feed or ethanol.)

A Henderson, Ill., produce grower told The Register-Mail that the worst part of the hot weather is how it's affecting people working in the fields.

In Kansas, many vegetable growers are not doing as well, with the biggest impact of the drought the increased costs to power irrigation pumps, and chemicals to deal with bugs that are worse than normal this year. Kansas fruit growers are less affected because most crops are perennial and have deep roots.

Back in Canada, Montreal Gazette food writer Julian Armstrong says this is "an excellent produce year for most of Quebec."

Armstrong says to expect serious bargains ahead for broccoli, romaine lettuce and peppers.

Farmers on both sides of the border "that have uncontracted crops for sale in 2012 stand well-poised to capitalize on the situation," Rinneard notes. As well, the "higher crop prices will offset moderate yield deterioration," he adds.

U.S. farmers have crop insurance for about 85 per cent of this year's crops, mitigating their losses.

For consumers, U.S. food prices were already increasing more than the inflation rate before the drought, and most economists expect that to continue. The USDA expects grocery prices to rise about four per cent next year.

Economists say it takes about six months for higher crop prices to reach supermarkets, because food processors have usually locked in their costs ahead of time.

With processed foods, ingredients usually account for only a small fraction of the cost. Even at today's high corn prices, a 12-ounce box of cornflakes in the U.S. would contain just eight cents of corn, according to Paul Bertels of the National Corn Growers Association.

Because of consumer resistance to paying higher prices, manufacturers may prefer to reduce package sizes.

The USDA forecasts that global inventories of wheat will contract more than any other major crop next year. Even after shrinking by 7.5 per cent, the global wheat inventory will still be 42 per cent larger than in 2008.

According to Don Coxe, who oversees the Coxe Global Agribusiness Income Fund, falling food inventories and rising demand suggest trouble ahead. "Maybe we are closer to the edge globally than we thought."

Crops have been the best-performing commodities so far in 2012. Goldman Sachs Group Inc., Macquarie Group Ltd. and Credit Suisse Group AG all told Bloomberg News that they expect that will continue to be the case.

Coxe told the media conference call that, "agribusiness stocks have the best combination of risk and reward," adding that "that will be the case for years to come."

However, once again the numbers vary. In the fertilizer sector, for example, while the price of Potash Corp. shares are about where they were at the beginning of 2012, Agrium shares are up over 40 per cent.