Denial comes after U.S. president said he is willing to be interviewed under oath

Trump denied the report, without addressing the specific allegation, as he arrived Friday at the site of the World Economic Forum annual summit in Davos, Switzerland.

McGahn said he would not deliver the order to the Justice Department, according to the Times, which cites four people familiar with the request by the president.

Trump argued at the time that Mueller could not be fair because of a dispute over golf club fees that he said Mueller owed at a Trump golf club in Sterling, Va. The president also believed Mueller had a conflict of interest because he worked for the same law firm that was representing Trump's son-in-law and adviser, Jared Kushner.

The response from Democrats was nearly immediate. Sen. Mark Warner, vice-chairman of the Senate select committee on intelligence, said that if the report in the Times is true, Trump has crossed a "red line."

"Any attempt to remove the special counsel, pardon key witnesses or otherwise interfere in the investigation would be a gross abuse of power, and all members of Congress, from both parties, have a responsibility to our Constitution and to our country to make that clear immediately," Warner said.

Trump to be interviewed?

The report comes as Mueller moves ever closer to interviewing Trump himself. The president said Wednesday that he would gladly testify under oath — although a White House official quickly said afterward that Trump did not mean he was volunteering to testify.

Last June, when Trump was considering how to fire Mueller, the special counsel's probe had not progressed far, at least not in public.

At that time, he had yet to call on any major witnesses to testify and had not yet issued any charges or signed any plea deals. But that would change just a few months later, when federal agents would arrest former Trump campaign adviser George Papadopoulos and ultimately turn him into a co-operating witness.

Since then, Trump has largely stopped talking about explicitly trying to fire Mueller, but has instead focused on attacking news reports and accusing Mueller and his team of being biased and unable to complete a fair investigation.

The latest evidence the president has cited was a string of text messages from a former agent on Mueller's probe, which show that agent vociferously opposing the president. But Mueller swiftly removed the agent, Peter Strzok, from his probe after learning about his texts.

Trump touched on his long-running critique of the news media during an event later on Friday in Davos, During a question-and-answer session with the forum's founder, Trump said it wasn't until he became a politician that he realized "how nasty, how mean, how vicious and how fake the press can be."

His comment prompted some boos and hisses in the room. 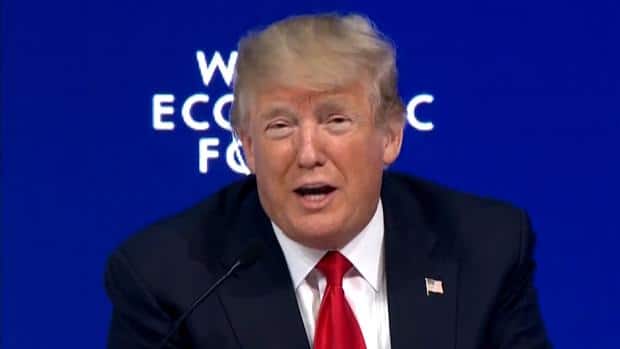 Former Trump campaign chairman Paul Manafort and former Trump adviser Rick Gates were charged by Mueller with criminal conspiracy related to millions of dollars they earned while working for a pro-Kremlin Ukrainian political party. And former national security adviser Michael Flynn agreed to cooperate with investigators in a plea deal revealed two months ago. Flynn was charged with lying to the FBI.

Mueller's investigators have been focusing their inquiry on questions surrounding Trump's firing of Flynn and also his firing of former FBI director James Comey. They have slowly been calling in more witnesses closer to the president himself and, recently, began negotiating the terms of a possible interview with the president.

On Thursday, Trump's lawyer said more than 20 White House employees have given interviews to the special counsel in his probe of possible obstruction of justice and Trump campaign ties to Russian election interference.

An additional 28 people affiliated with the Trump campaign have also been interviewed by either the special counsel or congressional committees probing Russian election meddling. Dowd's disclosure did not name the people nor provide a breakdown of how many were interviewed only by Mueller's team.