What would it take for Donald Trump to rip up NAFTA?

Presumptive Republican presidential nominee Donald Trump has said he would rip up NAFTA if he couldn't renegotiate the deal. If elected, he may find it isn't quite so straightforward. 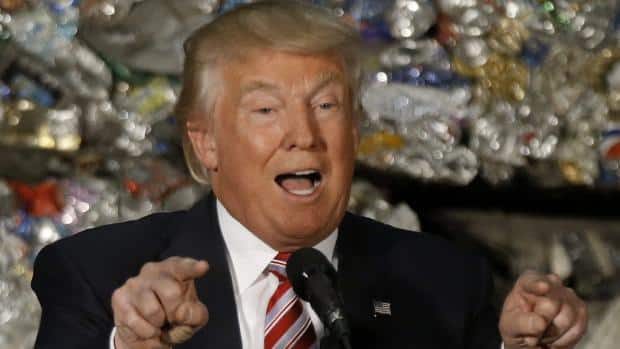 Trump promises to withdraw from NAFTA

Presumptive Republican presidential nominee Donald Trump, not known for mincing his words, made no bones about his views on NAFTA in a speech on Tuesday. It is "the worst trade deal in history," the real-estate mogul said.

A Trump White House would tell its NAFTA partners — that is, Canada and Mexico — that the U.S wants to immediately renegotiate the terms of that agreement to get a better deal for American workers.

"And I don't mean just a little bit better, I mean a lot better," said Trump.

If the partners couldn't come to more favourable terms, Trump says he would scrap the agreement entirely.

Specifically, Trump said he would submit notice under Article 2205 of the agreement that America intends to withdraw from the deal. That article states that "a Party may withdraw from this Agreement six months after it provides written notice of withdrawal to the other Parties."

Such warnings aren't exactly new to American politics. Both Hillary Clinton and Barack Obama made similar threats in 2008, when they were competing for the Democratic presidential nomination.

But would a President Trump have the power to just tear up the agreement?

The answer: It's unclear.

'The simplest deal to kill'

"It's the simplest deal to kill," says Barry Appleton, a Toronto-based lawyer who specializes in international trade and investment law. "The NAFTA can be abrogated after six months notice. Period."

And it is the president who would have that authority, he says.

"[Trump] can rip up the deal. He can say to Canada, 'You're fired.' The written notice doesn't have to be an act of Congress."

"My understanding is that [Article 2205] is a standard clause which allows their president to withdraw their country from the obligations that they were previously committed to."

...Or it may require Congress

Lawrence Herman, an international trade lawyer based in Toronto, disagrees; he believes Congress would need to sign off as well. "It's not in the purview of the executive branch."

The murkiness over who has the power to kill NAFTA stems in part from the debate over the powers of the American president to make or break treaties, as well as questions about whether NAFTA counts as a treaty or executive agreement.

According to Toronto-based international trade lawyer Mark Warner, while a President Trump could notify Canada and Mexico of America's intention to withdraw from NAFTA, leaving would require Congress to change some of the underlying elements of the agreement.

"And I think it would be a mess," he say. "What [would that mean] in terms of the statutes? Nobody really knows."

Michael Dorf, a constitutional law professor at Cornell University, says it's generally understood that in U.S international law, the president has the authority to unilaterally terminate an agreement.

But that's complicated by the fact that while NAFTA itself was signed by the president, it was Congress that enacted legislation to implement the deal (the NAFTA Implementation Act), and that statutes can only be repealed by Congress.

To summarize: Trump could theoretically terminate American obligations to Canada and Mexico under NAFTA, but it is possible that would render the NAFTA Implementation Act invalid, since it wouldn't be implementing anything any longer.

Alternately, it could "continue to have a life on its own, almost as a zombie," Dorf says. If that was the case, then at least some of NAFTA's provisions might stay in effect.

An even briefer summary of the situation, according to Dorf: "The answer is unclear."