Donald Trump injecting himself in the annual July Fourth celebrations had some observers expecting the U.S. president to deliver a divisive speech. Instead, he delivered a non-partisan address that focused on American achievement, with a heavy emphasis on the military.

U.S. President's Salute to America at National Mall a departure from past celebrations

Donald Trump's controversial decision to inject himself in the annual Fourth of July celebrations had some observers expecting the U.S. president to deliver a divisive, partisan campaign stump speech, peppered with shots at his political opponents.

In the run-up to the event, former director of the United States Office of Government Ethics Walter Shaub wrote that it seemed likely the president would "talk about his re-election bid or fling schoolyard nicknames at his political rivals."

Shaub, an outspoken critic of the president who is now with Citizens for Responsibility and Ethics in Washington, had even prepared a checklist to see whether the president would violate any ethics laws by using the taxpayer-funded event for unauthorized "publicity or propaganda."

That would have included using a campaign slogan, referring to his approval ratings, or even mentioning his political party or rivals.

But as Shaub watched Trump's address, even he had to admit that the president was avoiding political territory.

I have to give him credit, though. So far, he's sticking to this dry as melba toast speech and resisting the temptation to riff. We must have scared him straight. He doesn't want his campaign to have to repay the government the millions he'd owe if he got political.

In the end, Trump delivered an address that focused on American achievement, with a heavy emphasis on the military.

"It was a history lesson. He didn't get into the campaigning," said Mike Purdy, a presidential historian and creator of Mike Purdy's PresidentialHistory.com blog.

Trump's decision to hold his Salute to America, including a prime-time address at the National Mall, was a departure from past Independence Day celebrations.

Not since 1951, when President Harry Truman spoke before a large gathering on the Washington Monument grounds to mark the 175th anniversary of the signing of the Declaration of Independence, has a commander in chief made an Independence Day speech to a sizeable crowd on the Mall.

Although Trump's speech veered away from politics, he had already drawn criticism for the cost of the event — and for turning it into an opportunity to showcase U.S. military might. Talk about tanks being included in the festivities had some drawing parallels to Soviet-era and North Korea military parades.

It also sparked protests earlier in the day. Hours before Trump's speech, the anti-war organization Codepink erected a "Trump baby" balloon to protest what activists saw as his intrusion in Independence Day and a focus on military might.

Trump has reportedly longed for a public display of U.S. military prowess ever since he watched a two-hour procession of French military tanks and fighter jets in Paris on Bastille Day in July 2017.

On Thursday, at least some of that became a reality for the president. 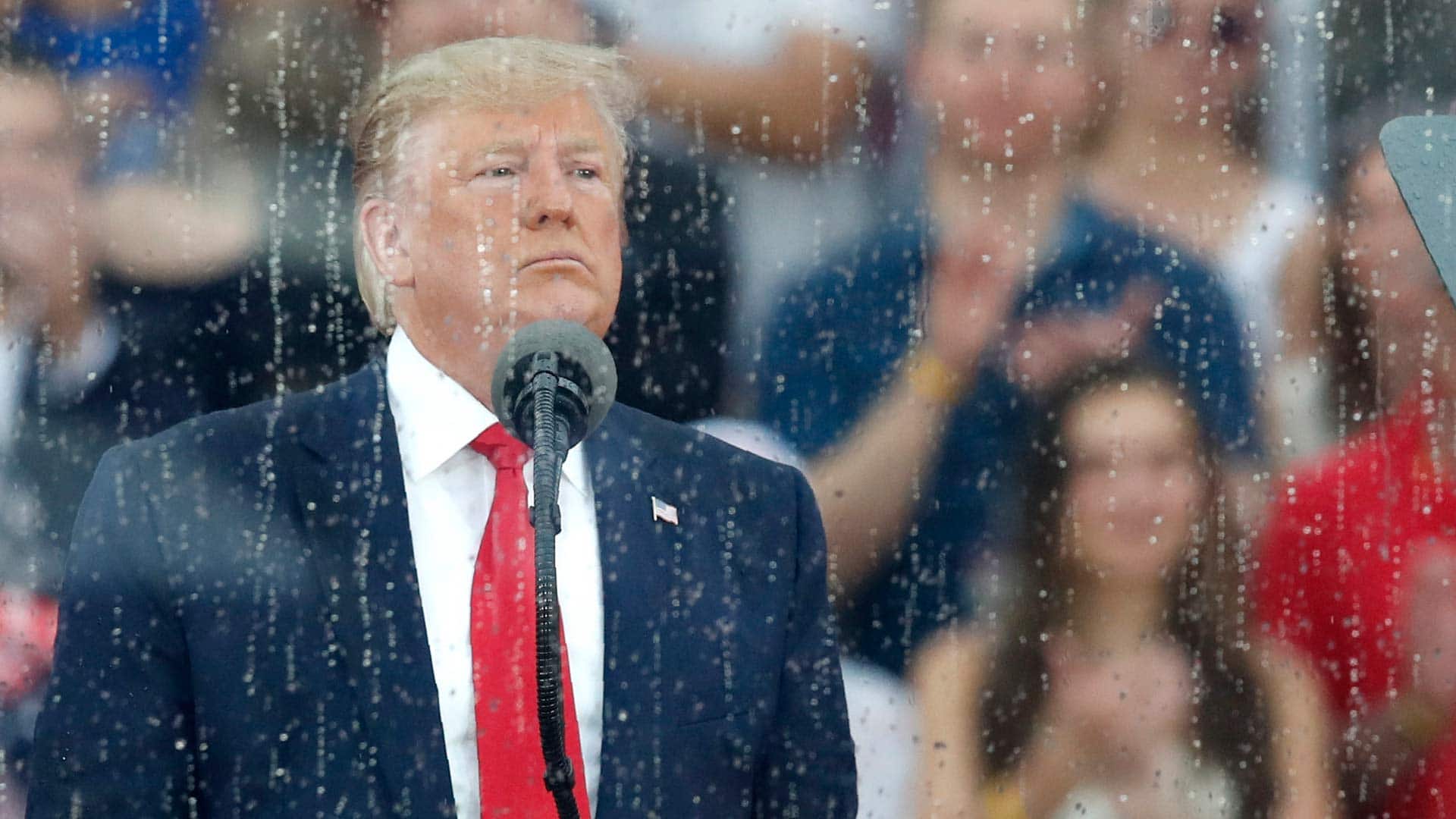 Trump's address included flyovers from military aircraft. But tanks never did roll down Pennsylvania Avenue (in part, out of concerns it would damage the city's infrastructure). However, two M1 Abrams tanks and two Bradley Fighting Vehicles were stationed near the Lincoln Memorial.

But as The Daily Beast reported, fences surrounding the area also surrounded the tanks, meaning the vast majority of attendees couldn't see them.

Standing behind protective glass, Trump spoke for about an hour, touching on milestones of American history including the Declaration of Independence, the American Revolution, and other significant political and cultural events. He also recognized people in the crowd, including Apollo Mission Flight Director Gene Kranz, who had taken part in such historic moments.

Trump spent much of the time praising the U.S. military, paying tribute to each branch, and saying that "our nation is stronger today than it ever was before. It is its strongest now."

"The speech was triumphalist," said Michael Cornfield, an associate professor at George Washington University's Graduate School of Political Management and Research. "It was heroic tales from history, mostly military history."

Cornfield said he wasn't necessarily surprised that Trump would remain politically neutral, saying the president stuck to the script during the 75th D-Day anniversary. (Although he would later be criticized for blasting House Speaker Nancy Pelosi in an interview with Fox News at the Normandy American Cemetery.)

"The only parts of the [July 4th] speech that really gave me pause was when he got into his nationalistic mode and said we'll reign forever and ever and ever," Cornfield said. 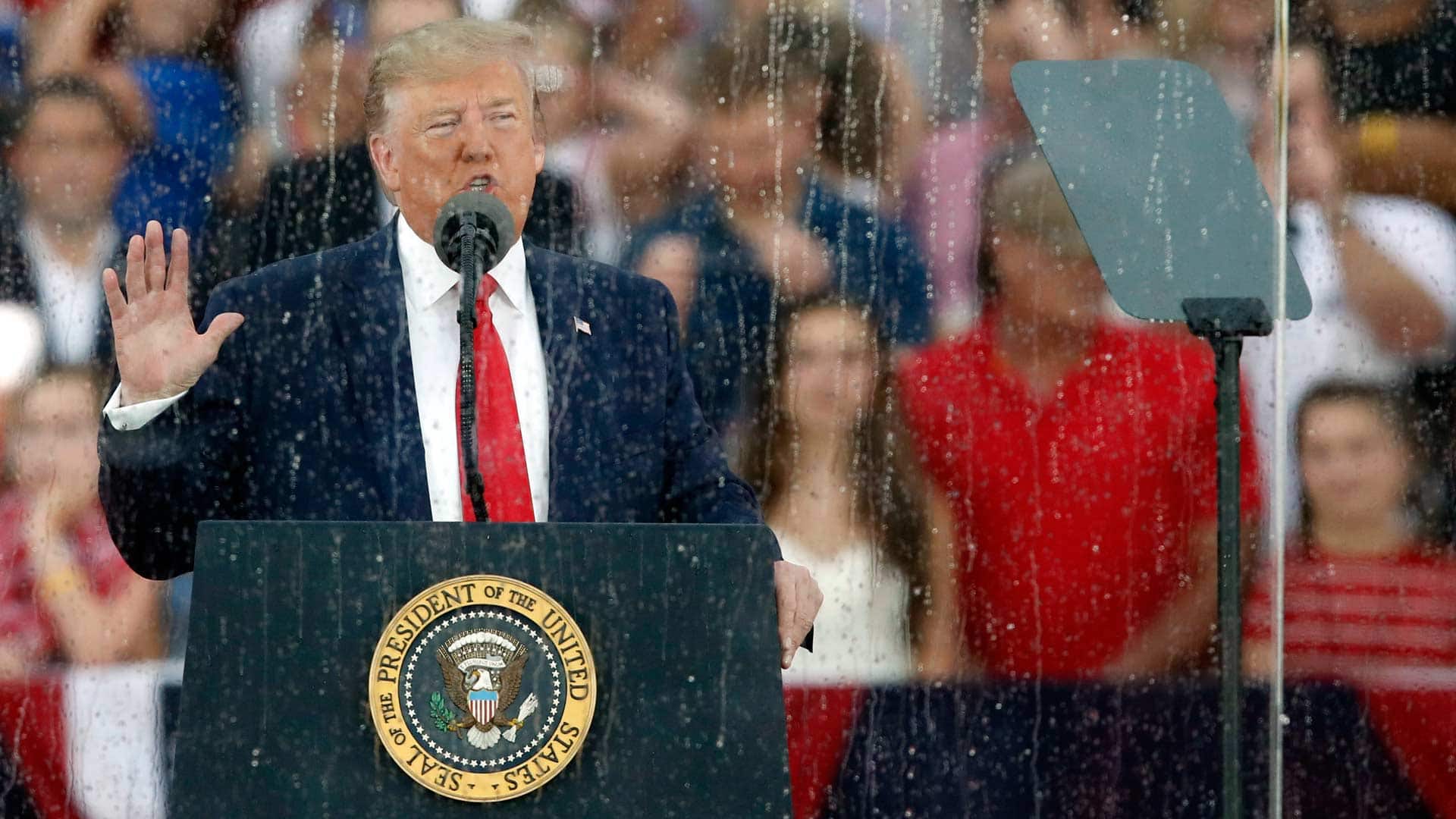 2 years ago
0:34
From jazz to the World Series, Donald Trump boasts of U.S. cultural contributions. 0:34

Purdy, a historian, said he thought the first part of the president's speech was good, as Trump recounted inspirational moments in American history.

But focusing on the military, is "not really the main purpose of Independence Day," Purdy said.

Purdy thought Trump's focus on the military should have been limited, and that the speech could have been more inspirational about democratic values and what happened in 1776.

"Why was this speech and this big event and saga necessary if he'd wanted to give a history lesson. He could have done it from the White House for a lot less expense."