Why a threat to impeach the U.S. president might ultimately play as a Trump card

With the 2018 midterm elections on the horizon, U.S. President Donald Trump has a keen interest in holding onto a Republican-controlled Congress. So he’s taken to using what would normally be the most bizarre of tactics: the threat of impeachment.

With midterm elections on the horizon, Trump has keen interest in holding on to Republican-controlled Congress

Summer in Washington is almost always a time for thinking about elections. As Congress and the president scatter for a couple of weeks in August, clever minds while away the dank days gaming out scenarios for how the never-ending cycle of politics might turn.

(This is also a pastime in the coolness of winter, spring and fall, by the way.)

But not too far beyond this summer's horizon lie the 2018 midterm congressional elections, voters' first real chance to grade the class of 2016 — the class of Donald Trump. While his own name won't be on the ballot, Trump has a keen interest in those who talk his talk walking the walk when the time comes.

The Trump presidency has been in such a state of disarray so far that he's taken to rallying his base with what would normally be the most bizarre of tactics: He's reminding them he's under criminal investigation and might be impeached.

There's considerable canniness to it.

The point is to undermine confidence in the investigation just as, at other times, Trump has sought to create distrust of the courts, the electoral system, the media, et cetera. Assaulting democratic institutions is not good for the U.S., but when Trump believes it will work for him, he doesn't hesitate.

So last week in West Virginia, the president told an overflow crowd of his most fanatical supporters that the investigation into whether his campaign colluded with Russia during the 2016 election was concocted by Democrats — partly to explain their loss of an election they should have won, and partly for a darker, more sinister purpose. 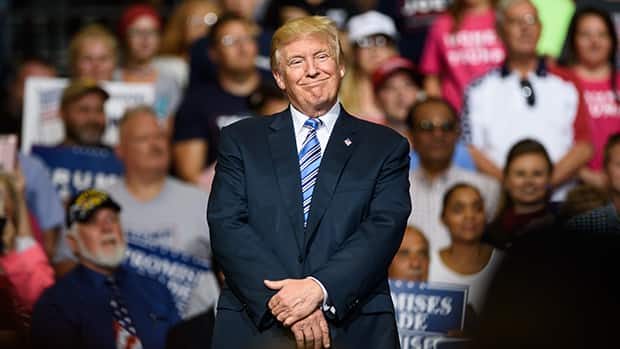 Trump appeals to loyalists during campaign-style rally in West Virginia

3 years agoVideo
1:25
The U.S. president is trying to turn the ongoing Russia investigation into a rallying cry, using it to re-engerize his staunchest supporters 1:25

"They can't beat us at the voting booths so they're trying to cheat you out of the future and the future that you won," he said.

Such an assertion implies that something undemocratic, like a coup d'état, is underway.

It's an outrageous claim for the president of the United States, but political discourse here now accommodates such tactics. It doesn't matter what the consequences of such an inflammatory claim would have been for any other president; this is how this president talks.

It's possible that Trump, knowing precisely what he has and has not done, sees prosecution in his future and is raising doubts about the fairness of it — just because that's what he does whenever things look to be turning south.

It's more likely he sees that the biggest threat to his presidency will come if Democrats control the House of Representatives — where impeachments begin — after next year's midterm elections, and he's gaming it out.

Because it's not too early to think about a ballot box question for November '18, Trump is experimenting with firing up talk of impeachment. That works for him in a couple of ways.

First, it's not like he has a lot of options.

His communications staff has been trying to gaslight the U.S. about how bad things were before Trump, as well as about all the great things the president has accomplished in such a short time.

But so far his one big legislative effort has been the sputtering failure to repeal and replace Obamacare, a blunderfest that the president recklessly insists Congress keep repeating in the hope of a different result.

And his communications staff says Trump has signed more legislation in eight months than any president since Franklin D. Roosevelt — and that's true. But when you run through a list of the things he's put his name to, you find it padded with "nothingburgers" such as Resolutions 30, 35 and 36, which appoint new regents to the board of the Smithsonian Institution and sign off on names for new buildings and monuments.

There's nothing on the list to run on, nothing to drive Trump voters to the ballot box.

But then there's impeachment.

Impeachment can be a winner for Trump. He knows it — and so do Democrats.

It's no secret that Democrats have been in a quandary over impeachment. Only a few publicly lust for it; most are silent or change the subject. The reason is they fear a campaign for impeachment will make them — not Trump — the issue, and then Democrats would have to run as the party that wants to undo the will of the people.

We've seen this before and we know how it ends.

In 1998, Republican House Speaker Newt Gingrich led his party's push for the impeachment of Bill Clinton, and the result was fewer Republican seats after the midterm elections. It was the worst performance in 64 years by a party not holding the presidency and it effectively ended Gingrich's political career.

Trump knows few things will turn out Republican voters next year like the threat of a Democrat-controlled House trying to impeach him. And it won't be just the hard-core base defending his presidency.

A significant majority of Republican voters approve of the job Trump is doing. And even those who can't stand him might consider ousting him as an egregious affront to democracy.

It's possible that before the midterms arrive, special counsel Robert Mueller will deliver a report that makes Trump indefensible. That would change every calculation.

But until that moment, the threat of impeachment might just be Trump's strongest card in an otherwise weak hand.