U.S. President Donald Trump struck a new tone on the war in Afghanistan on Monday — not pulling out, but digging in. It's a strategy not meant to immediately win the costly, complicated war, but to buy time to try and stabilize the situation and find a way out, experts say.

'To say you're going to defeat terrorism is good, but when you don't say how is not terribly helpful'

U.S. President Donald Trump struck a new tone on the war in Afghanistan on Monday — not pulling out, but digging in.

It's a strategy not meant to immediately win the costly, complicated war, but to buy time to reach a negotiated settlement or find a military, economic and diplomatic way out, experts say.

Speaking before an Arlington, Va., military crowd at Fort Myer,  the U.S. president outlined his new strategy on America's involvement in Afghanistan, where American troops have been mired in conflict for 16 years, costing thousands of lives and $800 billion US.

In the speech, Trump framed his political backpedalling on withdrawing completely as a learning moment.

"My original instinct was to pull out. And historically, I like following my instinct," Trump told the crowd, acknowledging previous tweets and comments in which he called the U.S. presence in Afghanistan a waste of money and said that all troops should "come home."

The president said he "studied" his options with the close counsel of his military generals before arriving at a different outlook on the region, one that forgoes "arbitrary timetables" in favour of goals based on conditions.

"All my life, I've heard that decisions are much different when you sit behind the desk of the Oval Office," Trump said. 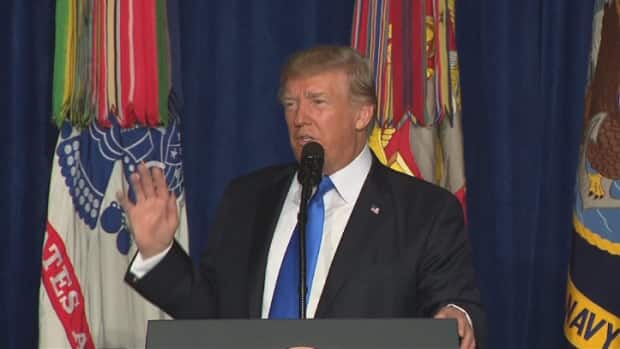 Donald Trump lays out his plan for the war in Afghanistan

3 years agoVideo
1:19
President says he won't detail exactly when and how the U.S. will attack 1:19

To some experts, the policy the president outlined during his prime-time announcement, while light on detail, sounded like a long-term regional commitment.

"To basically admit you don't have a deadline; that you're essentially involved in a war of attrition is realistic," said Anthony Cordesman, a national security analyst with the Center for Strategic and International Studies.

"It's realistic but undefined in terms of any strategy. This did not sound like a strategy, but a set of goals."

Choosing 'between bad and less bad'

As much as Trump may have inherited a mess, Afghanistan is his mess now — and there's no easy cleanup.

Isolationist far-right voices in the White House such as former strategist Steve Bannon, who was ousted last week, had been calling for an all-out withdrawal of the roughly 8,000 U.S. troops in Afghanistan.

But the president said he realized a move of that magnitude would leave Afghanistan susceptible to becoming a failed state and a future launching pad for ISIS or Al-Qaeda to wage a 9/11-style attack on the West.

Listening to Trump concede to misjudging how fragile the security and stabilization situation is in Afghanistan was a remarkable moment to Scott Worden, director of Afghanistan and Central Asia Programs at the U.S. Institute of Peace.

But if "realistic" describes Trump's new tack on Afghanistan, so does "vague," Worden said.

The president's approach calls for taking a harder line against Pakistan for sheltering terror groups, giving up on trying to spread American-style democratic values in the region and focusing on rebuilding the Afghan army.

"But we didn't hear any details on what leverage points are going to be used against Pakistan," Worden said. "What would be the offer on the table to from the U.S. to induce regional neighbours to support our Afghanistan approach?"

Experts suggest punishments might include sanctions against individuals or the U.S. withholding funds from Pakistan over failure to crack down on the Taliban's anti-American Haqqani Network.

Trump has used the banner of "principled realism" to define his Afghanistan blueprint.

Ron Neumann, a former U.S. ambassador in Afghanistan from 2005 to 2007, said Trump's announcement was a "somewhat general speech that laid out a broad policy, but not implementation."

Whereas Trump's predecessor Barack Obama "laid out too much operational detail without having a strategy together," Neumann said Trump's speech laid out a broader strategy but seems as though it's leaving it up to others such as NATO allies to develop execution.

The former ambassador said the president may have tried to differentiate himself from Obama's complicated legacy, which Trump has sharply criticized.

In some ways, though, it's more of the same, committing to supporting the Afghan government and building the military while clamping down on the Taliban insurgency.

Obama originally aimed to draw down U.S. forces in a gradual pullout of 33,000 soldiers by 2012. He later slowed the pace of troop removals in the face of a Taliban threat gaining ground in the country. By February of this year, the Afghan government controlled only about half the territory of the country, according to a quarterly report to Congress.

To that end, the Trump strategy is "a step in the right direction," Neumann said. "But the greater question is what does it mean?"

"To say you're going to defeat terrorism is good, but when you don't say how is not terribly helpful," he said. "To threaten Pakistan without getting into details may be useful, but sooner than later you have to provide the details."

This is not the Afghanistan of 2001 anymore, said Jim Carafano, a national security expert with the Heritage Foundation.

The objective isn't to defeat the enemy and turn over the country to someone new, but to prevent the collapse of the state, thereby denying it from becoming a platform for transnational terrorism.

"In 2017, there is an Afghan nation that didn't exist in 2001, and that's changed a lot," Carafano said. "Afghanistan is not a source of regional instability, so it's all about keeping the country from flying apart. When's the mission going to be over? Well, this is about achieving a condition, not necessarily accomplishing a mission. This is about sustaining something over time."