What the first 100 days of power reveal about Donald Trump

Now that Donald Trump has had a few months with the power to do what he always wanted to do, here's what we've seen him do.

There's more to a president's first 100 days than will be found by running through his campaign promises and checking them off: "kept," "unkept" or "broken."

The celebrated biographer Robert Caro, who has devoted most of his life to the study of political power, teaches that the enduring lesson of high office is that "power always reveals."

Now that Donald Trump has had a few months with the power to do what he always wanted to do (his first 100 day mark comes Saturday), here's what we see:

As we suspected, he likes wealthy folk. One of his most revealing moves after winning the White House was to send for the rich people. 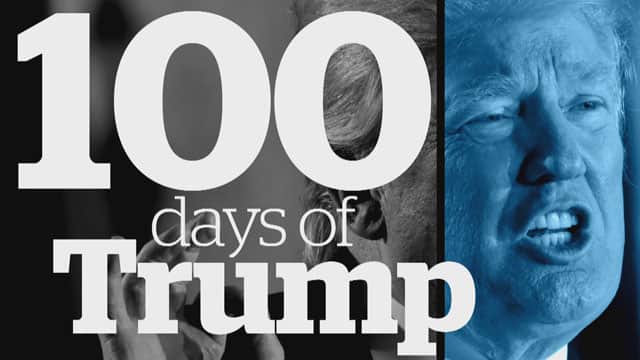 Trump's first 100 days: By the numbers

His campaign harangue against the Wall Street donor class made it sound as though he was going to put them in their place. But their place, it turns out, is at the very heart of his administration. "I want people who made a fortune!" he said, and surrounded himself with billionaires and multimillionaires in his cabinet and among his key advisers.

There was a remarkable brazenness to some of it. Trump's campaign fundraiser Steve Mnuchin seemed exactly the type of Wall Street hedge fund manager Trump railed against for sullying politics with their money. And yet Mnuchin the hedge fund manager is now Mnuchin the treasury secretary. He and the others of the uber-wealthy in cabinet are tasked with lifting what they believe is the dead hand of regulation from business with the usual assurances that they are acting in the public interest.

Despite Trump's claims that only he had the knowledge and expertise to fix Washington, Trump has revealed himself to be a kind of innocent in the White House.

That was proved by his first foray into law-making, now known as the health care debacle. He showed little understanding of either the details or the big picture of health care policy. He dipped into the gnarly file long enough to discover it was an "unbelievably complex subject" and declared, "Nobody knew that health care could be so complicated."

Then he outsourced the "repeal and replace Obamacare" planning to the party leaders in Congress. House Speaker Paul Ryan concocted a mean bill that ruthlessly betrayed most of Trump's campaign promises.

Not only didn't Trump care that the bill ignored his campaign promises (better, cheaper health care for everyone), he apparently didn't even care that everyone could see that he didn't care. He welcomed the Ryan proposal like a proud first-time dad and called it "our wonderful new health care bill."

Next we learned that Trump's vaunted Manhattan deal-making skills weren't up to making deals with the restive Republican caucus. There was no majority for his bill and he couldn't coerce one.

Maybe Trump's diatribes about Washington as a swamp that needs draining explain why he elevated neophytes and amateurs to his White House — the Bannon group of hardline "America First" nationalists, and his daughter Ivanka and son-in-law Jared Kushner, known to their detractors as "the Democrats." The two camps appear to be struggling against each other for the soul of the presidency.

Ivanka's shock at the pictures of gassed children in Syria, we are told, was what led the president to order a cruise missile strike on a Syrian airbase. But that rocked the nationalists inside the West Wing and Trump's most devoted followers in the hinterland.

Republicans who voted for him despite their misgivings are pleased that he appointed a conservative judge, Neil Gorsuch, to the Supreme Court. But history will record that was more a credit to Senator Mitch McConnell, who manoeuvred to keep the court's seat open for nearly a year hoping for a Republican president, and then set a precedent by breaking the Democrats' filibuster to force a confirmation vote.

What power has revealed about Trump is that he really is as seriously unprepared for the presidency as many feared during the campaign. His Twitter-self continues to exist in an imaginary world polarized between cringeworthy self-congratulation and "alternative facts" where all bad news is fake.

In many cases — health care, foreign policy, even the credibility of labour force statistics — Trump has casually moved to a position opposite from the one on which he campaigned. Almost everything seems negotiable. What remains inviolate is golf.

In the campaign Trump said, "I'm going to be working for you, I'm not going to be playing golf." But since his inauguration he has squeezed in about 20 rounds. That's a lot of golf for a president. Trump has the power now to do what he always wanted to do. What he doesn't want, apparently, is for the power of the presidency to interfere too much with the life he knew before.