Despite Trump's scaremongering, socialism is gaining a foothold in America

There has been a lot of talk about the rise of socialism in U.S. politics, thanks to the profile of people like Sen. Bernie Sanders and Rep. Alexandria Ocasio-Cortez. But broader interest in "people over profits" has been brewing for a while, writes Keith Boag.

Caitlin Brady speaks of socialism as though it's the only rational response to 21st-century America.

"I work full time, I work 40 hours a week, and I qualify for food stamps," the 31-year-old said, explaining why she volunteered for the Democratic Socialists of America (DSA) campaign in Chicago's municipal elections last month.

To get food stamps in Illinois means Brady makes no more than $1,670 US a month. She pays no income tax on that — but neither did tech behemoth Amazon pay tax on the reported $10.8 billion it made last year.

"The richest country in the history of the world," Brady said, "and I'm not able to put a roof over my head and eat."

Like many toiling in the trenches of the DSA campaign, Brady is a millennial. Born between the early 1980s and 2000, theirs is the biggest generation since the baby boom and the most likely to think the American Dream — success equals prosperity — is dead.

Chicago is a historically big "D" Democratic city, and for years it has operated a bit like a one-party state. Republicans don't figure much in its politics. Political offices are sometimes passed between generations of the same Democratic families.

But in recent years, the socialists have spotted weaknesses on the Democrats' left flank: unaffordable urban housing and unkept promises of rent control. They struck, painting the Democrats as sellouts to big real estate developers.

But underneath that headline was the news that the socialists running for a handful of city council seats had won them all. Granted, that's only four. But it means they now have six spots out of 50 in the government of the third-largest metropolis in the country — socialism's biggest victory in modern American history.

There are varieties of socialism around the world, but in the American context, it is fundamentally about ensuring that the health and welfare of the people does not depend on the incentives of capitalism.

"People over profits" was a popular rallying cry among Chicago's DSA. But the DSA did not insist that workers should control the means of production and promise to take over Amazon. They ran on affordable housing, universal health care and returning government to the people.

The results in Chicago were preceded by a tsunami of speculation about the resurrection of the American left— why and where in the land it might or might not pop up.

In March, New York magazine churned out several thousand words trying to answer its own question: When did everyone become a socialist? On the right, The Weekly Standard (just before it folded in December) took aim at what it called "the illusory dream of democratic socialism" in a piece called "Up from the Grave," which began: "It's back."

In between, countless think pieces have analyzed what's going on, usually making a link to the unexpected successes of Sen. Bernie Sanders and Rep. Alexandria Ocasio-Cortez (a.k.a. AOC). But the truth is the warming trend for socialism began before any of that.

Nearly a decade ago, the Pew Research Center reported that American millennials, a generation with growing political clout, saw the world differently than their forebears. A 2010 Pew study found that, as a whole, Americans strongly favoured capitalism over socialism, but millennials slightly favoured socialism over capitalism.

Perhaps because they had no memory of the Cold War, they didn't see socialism as a bogeyman. They were open to it.

A few years later, the political scientist and writer Peter Beinart took the Pew study and contextualized it in a widely read essay in the Daily Beast. Under the headline "The Rise of the New New Left," he tried to unpack how a promise to make the rich pay for universal childcare turned lefty Democrat Bill de Blasio into the mayor of New York. Priorities were disrupted, thought Beinart.

With a hat tip to the sociologist Karl Mannheim, Beinart argued that only certain generations disrupt the status quo, and they do it because something irregular and meaningful happens during their formative years — late teens, early twenties — that forever colours their worldview.

The political coming of age for the first American millennials wasn't at all like the decades that preceded it. The 21st century opened with the catastrophes of what some describe as "the fail decade" — as Beinart wrote, "the decade of the Iraq War, Hurricane Katrina and the financial crisis."

With striking prescience, he warned that both Republicans and Democrats had something to fear from a maturing generation that believes government should play an expanded role in their lives, and that status quo politics had failed.

More than three years ahead of the fateful 2016 election, Beinart predicted that in the Democratic primary, Hillary Clinton would be "vulnerable to a candidate who can inspire passion and embody fundamental change, especially on the subject of economic inequality and corporate power."

Beinart saw Senator Elizabeth Warren as that candidate. The eventual challenger turned out to be Bernie Sanders, but other than that, it seems Beinart was right.

Both Warren and Sanders are vying for the 2020 Democratic presidential nomination saying corporate power needs stronger guardrails. Sanders describes himself sometimes as a socialist, sometimes as a democratic socialist — probably to avoid persnickety arguments about whether there's a difference between them.

Warren eschews both labels and claims that ideologically, she's "a capitalist to my bones." But her skepticism about unrestrained markets is as defiant as Sanders'. She's against what she calls "shareholder value maximization ideology."

For instance, she has proposed an "Accountable Capitalism Act" about corporate governance. If it were law, it would force certain big corporations to have federal charters and allow their shareholders to sue company directors if they act contrary to the interests of "all corporate stakeholders" — meaning running afoul of employee rights and environmental impacts.

That sounds like a shout-out to the socialists that, whether they want to or not, Democrats are hosting in their party.

"We're being the real Democrats, that's how I like to view it," said 30-year-old Carlos Ramirez-Rosa, now in his second term as a DSA city alderman in Chicago.

"We're being truer to the history of the party, to Franklin Delano Roosevelt, to Lyndon Baines Johnson."

There is truth to that. FDR's New Deal and LBJ's Great Society are monumental figures in the history of the Democratic Party. They established unemployment insurance, Medicare, Medicaid, financial regulatory reforms and other programs that conservatives still dream of trying to roll back.

But the Democratic Party of FDR and LBJ was not the party of Bill Clinton and Barack Obama, both of whom extolled the virtues of leaner government. Clinton and Obama largely conceded to the economic arguments of the Reagan revolution, which conflated market freedom with personal freedom.

In his 1996 State of the Union address, Clinton famously declared "the era of big government is over." Obama's autobiography, The Audacity of Hope, has grudging respect for Reagan scattered throughout it.

Democratic House Speaker Nancy Pelosi has wrestled with the ambitious vision of the socialists in her caucus, and she's unequivocal about where she stands. "That is not the view of the Democratic Party," she told CBS's 60 Minutes recently.

Nor, from a strictly utilitarian perspective, could it be. Pelosi became Speaker after the Democrats took back the House in the 2018 midterm elections. Their margin of victory had little to do with democratic socialist AOC winning her seat in the reliably Democratic district of the Bronx. It had everything to do with candidates such as Abby Finkenauer, who overturned a Republican in swing state Iowa's First District.

Put another way, the number of degrees Democrats can safely shift to the left in 2020 is probably less than AOC and some others elected in safe Democratic districts would like.

No one knows that better than President Donald Trump, who used his State of the Union speech in February to kick off his campaign against an imagined red menace.

"We are alarmed by new calls to adopt socialism in our country," he said, and then went on to define socialism as the monster that ate Venezuela. "America will never be a socialist country," he pledged, implying the nation could bank on that only as long as he was in the White House.

DSA members often say that when they think socialism, they think Denmark, not Venezuela. But Democrats won't get to argue that case in the 2020 election debate when Trump is already winding up his base with wild stories about a socialist dystopia. He recently warned that the Green New Deal means people will have to give up their cows.

There are many reasons that this is a watershed moment for Democrats.

Not only do they want to beat Trump in 2020; many feel it's their moral responsibility. But socialist talk is unnerving to those who fear ideological flirtations are better put on hold — at least until they've dealt with job one.

WATCH | Municipal election results in Chicago could signal a broader turn toward socialism in American politics: 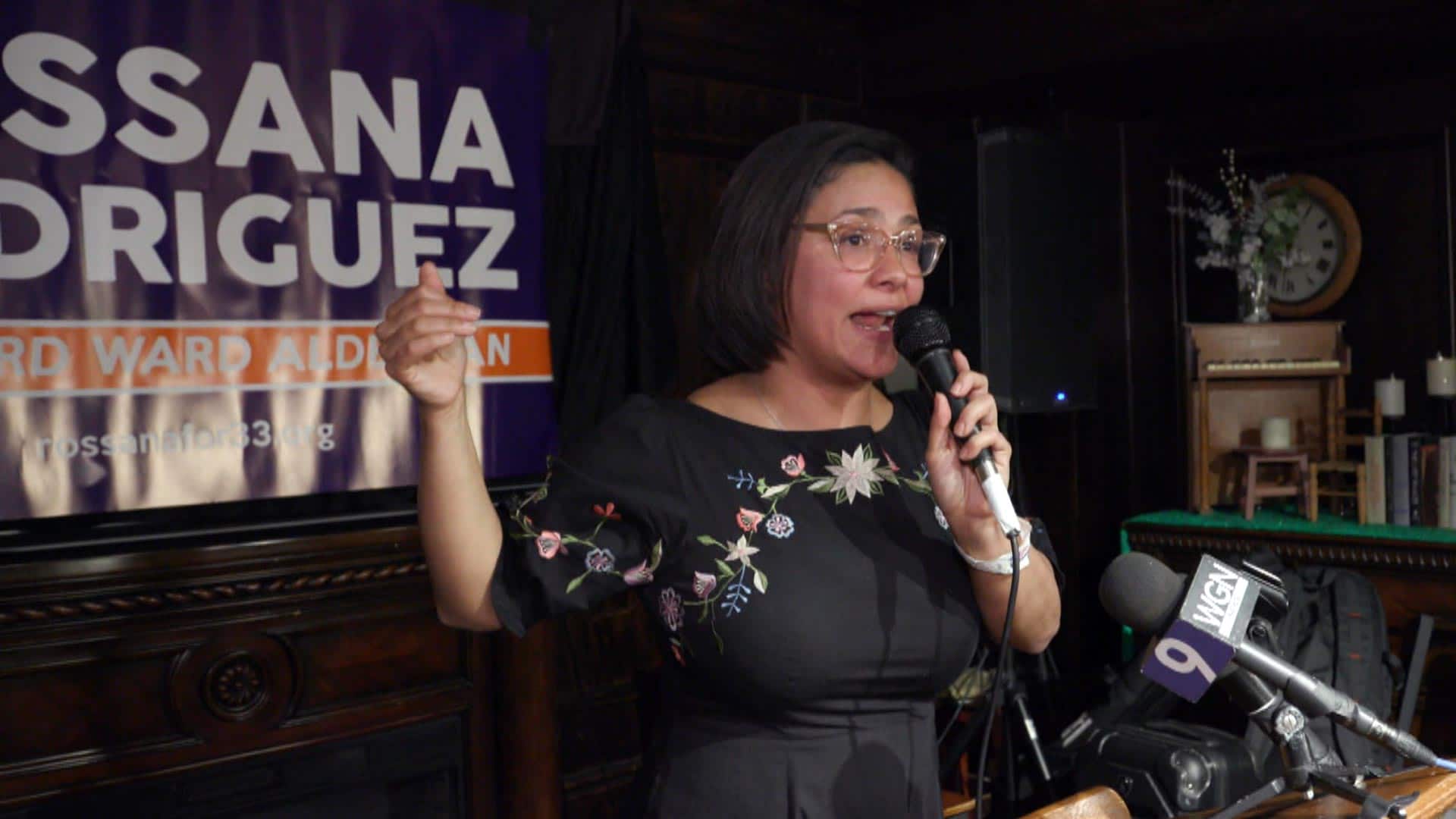 Is Chicago signalling a socialist turn for Democrats?