Turning points in history have a habit of revealing themselves at an American presidential convention. This one, too. During the first all-online Democratic convention, Milwaukee's barren streets reflect a country at a crossroads.

The first-ever online presidential convention tells a story about the country, its politics and a pandemic 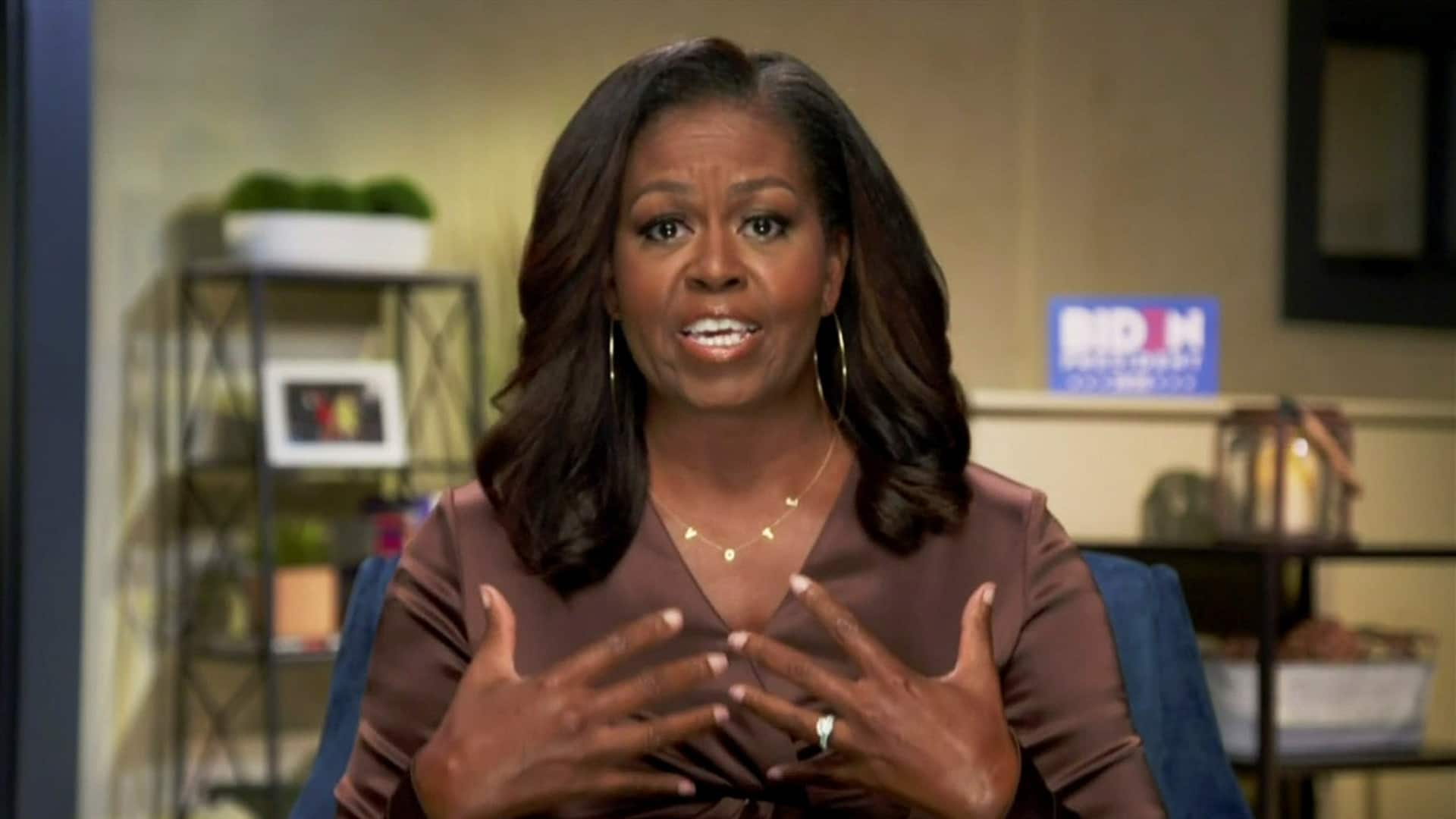 3 months agoVideo
3:37
Michelle Obama was the headline speaker on the first night of a dramatically altered, all-virtual Democratic National Convention in the lead up to Joe Biden accepting the Democratic presidential nomination on Thursday. 3:37

Turning points in history have a habit of revealing themselves in the backdrop of an American presidential convention.

Beyond the stage-managed balloon drops and multi-coloured streamers, the future gets written in the streets and on the sidelines: conventions have seen chaos and culture clashes, civil-rights revolutions, parties moving left, right, and careening toward irreconcilable rupture.

Now the streets are silent in Milwaukee.

In a pandemic-plagued year that's turbocharged a shift toward the online workplace, delegates at the first virtual Democratic convention tonight will cast votes from afar to make Joe Biden the Democratic nominee.

The four-day event has already cast a spotlight on a dark moment for a country not only ravaged by a virus, but by social fissures, which prompted unusually bleak prognostications at the event about American democracy itself.

A few barren streets away from the convention site, it's just another history-defining crisis for an old German restaurant, Mader's.

It's one of many local businesses battered by the Democratic convention's turn from the physical to the online realm, which kept tens of thousands of tourists from Milwaukee.

Auben Mader figures it cost him $500,000 in revenue — it spoiled plans to rent his building to three international news networks and to hold a beer festival in his parking lot.

But his fifth-generation family business has endured far greater catastrophes since it was founded by his German immigrant great-great grandfather Gustav.

It survived a staggering string of turmoil, in which a pandemic, the Spanish flu of 1918, was just the start. In 1920, Prohibition nearly killed the business; by the time Prohibition ended, in 1933, the Great Depression was already on; then came the Second World War.

"Everything that's been thrown at us; we bounce back," Mader said.

"And [we] come back harder — and better than we were before. We just go right at it and keep fighting."

His goal now is to make it through this pandemic without laying off a single employee. It's the same goal as Ahmed Yafai, a Yemeni immigrant who plowed his savings into two nearby convenience stores.

"[We're] barely floating above water. Barely making it," he said, but he expressed confidence he'd pull through.

That was the theme of Day 1 of the DNC: getting the country through a difficult year, more united than it is today.

A series of music videos and mini-documentaries attempted to portray the Democrats as a big-tent coalition of Americans eager to end the Trump era, ranging from the socialist left to disaffected Republicans on the right.

Serious ideological divisions exist within the Democratic Party — and they can't be talked away by four nights of infomercial-type speeches.

Members of the party's younger left wing stormed out in protest four years ago during a far busier, more bustling convention in Philadelphia.

This time, there's no real physical event to storm out of.

Fears for the American republic

Many are, however, voting against the party platform — because its proposed health reform doesn't go as far as single-payer health care. Some also complained at all the speaking time granted to conservatives.

But Sen. Bernie Sanders issued an unusually stark plea to these supporters.

It was the same warning made by the actress Eva Longoria as she kicked off Monday's show: that American democracy might not survive one more term of a president who constantly calls elections rigged, pardons friends, threatens the post office and admits it's for partisan advantage, fires independent watchdogs, meddles in Justice Department cases, and asks different foreign countries to help him out against election opponents.

"Authoritarianism has taken root in our country," said Sanders, arguing that this moment calls for the left, the centre, and even conservatives to work together in what he called the most important election in modern U.S. history.

"The future of our democracy is at stake." 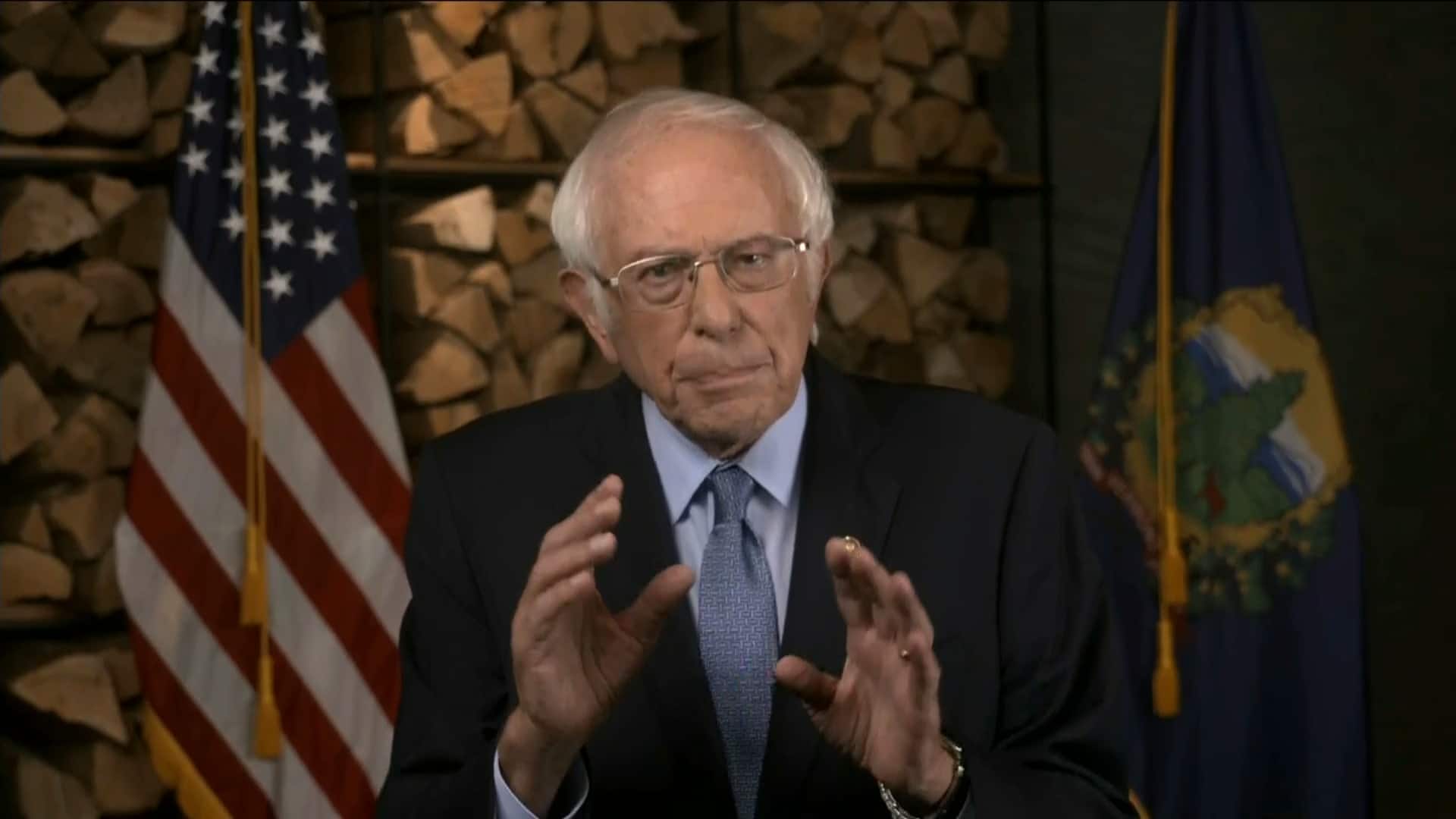 Sanders: 'The future of our democracy is at stake'

3 months agoVideo
8:25
Vermont Sen. Bernie Sanders, who ran against Joe Biden for the Democratic nomination, appealed to anyone who voted for other candidates in the primaries to rally behind Biden. 8:25

Speaker after speaker alluded, directly or indirectly, to their fear for the survival of the republic. It's perhaps a testament to this overheated political moment that Trump himself issued a strikingly similar warning Monday.

"We're gonna fight for the survival of our nation and civilization itself," said Trump, attending one of several events in Wisconsin and Minnesota, part of a tour aimed at overshadowing the Democratic convention.

"We are really gonna fight."

Trump accused his opponents of treason for investigations into his 2016 campaign — and repeated a joke he occasionally makes about extending his term in office beyond the eight-year legal limit.

As the Wisconsin crowd chanted, "Four more years!" the president interjected: "And then after that, we'll go for another four years. They spied on my campaign so we should get a redo." 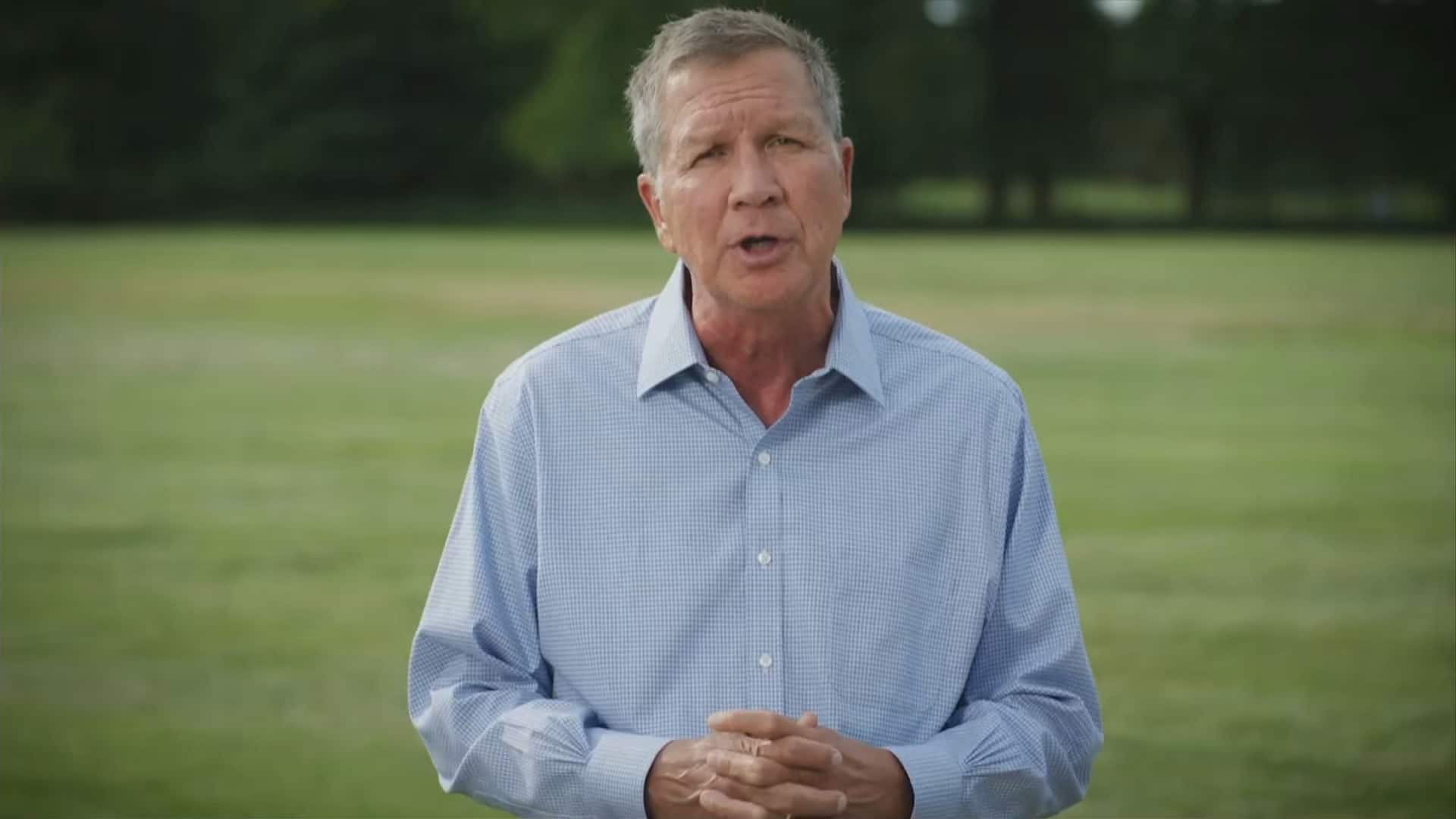 3 months agoVideo
3:54
Former Republican governor John Kasich explains why he, a lifelong Republican, is voting for a Democrat. 3:54

The mood on the left

So, progressive delegates to this Democratic convention may express their displeasure with the platform but there's far less talk than four years ago about sitting out the election or filing a protest vote.

CBC News spoke with three pro-Sanders delegates who voiced their intention to vote against the platform — two said they'd vote for Biden, one said she'd keep her plans secret.

Peter Rickman, a Milwaukee hospitality-union president, and a rare delegate to attend the convention in person, called Trump a "proto-fascist," who will grow more emboldened if re-elected.

Rickman predicted that Sanders supporters would turn out in greater numbers for Biden — close to 100 per cent, he said, compared to the 85 to 90 per cent he said voted for Hillary Clinton in 2016.

"[It's a vote] against Donald Trump," he said. "We don't need to love Joe Biden to elect him as the next president."

Another Sanders delegate from Wisconsin echoed the sentiment. Dairy farmer Sarah Lloyd said she's voting against the platform because she wants to believe she still lives in a democracy and can express her opinion.

But will she vote for Biden? "Today, right this second, with what I know, there's no doubt," she said. "The fascist threat of Donald Trump is terrifying."

Lloyd will not attend the gathering in person, even if she lives a couple of hours west of the official convention site.

She called it unnecessary, given the pandemic and the access to video links.

The actual convention centre, now hosting a tiny fraction of delegates and officials, is surrounded by a security perimeter to keep out the few anticipated protesters. 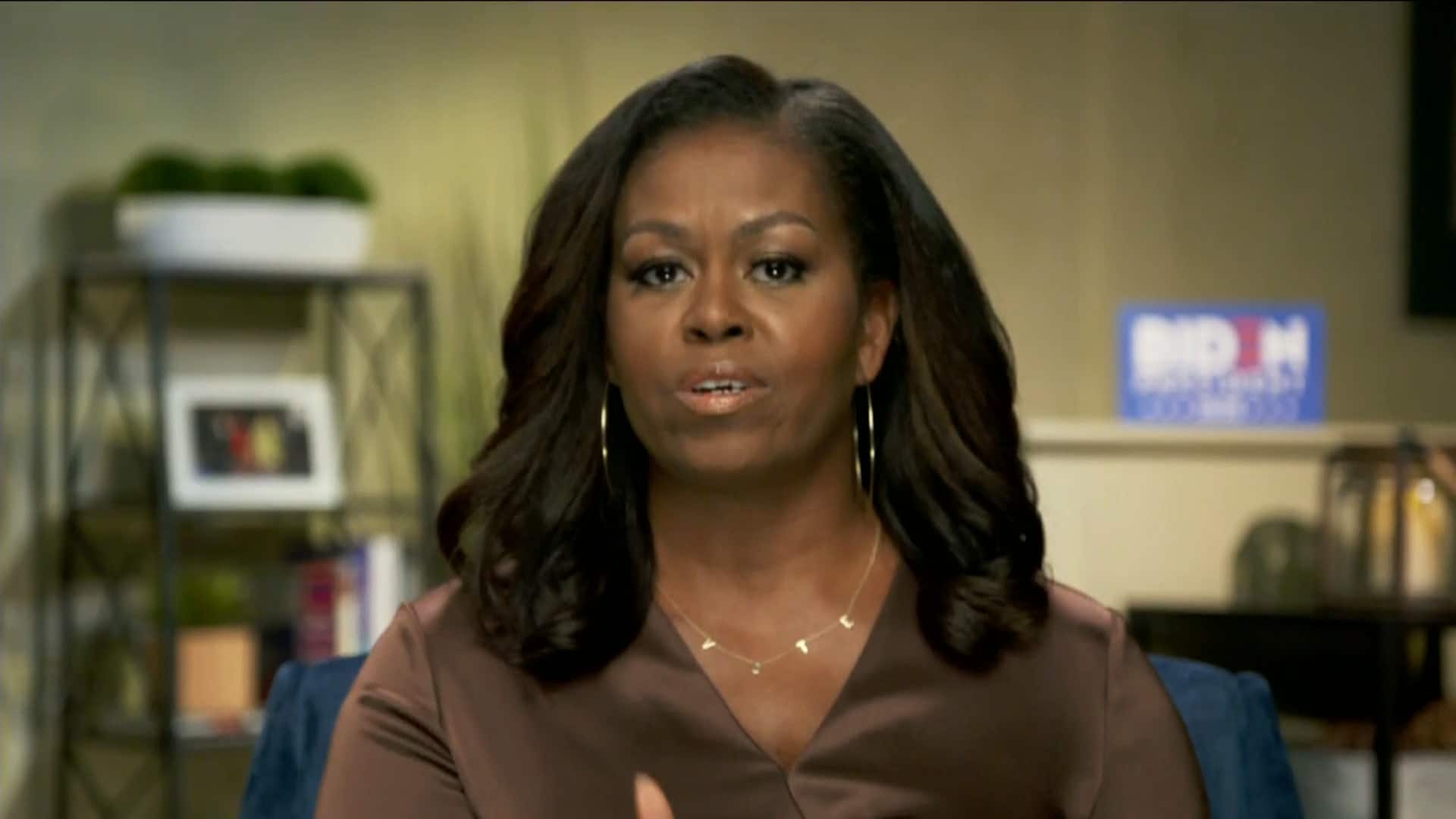 3 months agoVideo
18:24
In a passionate speech, former first lady Michelle Obama told Americans, "if you think things can't get worse, they can..." and she said they would if Donald Trump is re-elected. 18:24

The surreal scenes around the site

Near that security fence, the scene at the Canary coffee shop offered one of many canaries in this coal mine of a gathering.

A single patron was seated inside the shop on the eve of the convention, on a sunny Sunday mid-afternoon.

At the mostly empty Brat House, nearby, a couple of dozen patrons drank beer and watched baseball highlights.

A pair of jolly suds-swigging men on the outdoor patio engaged in a mask-free conversation in which they professed admiration for a mutual hero: a Scottish woman who credited whisky for helping her live to age 112.

Later in the afternoon, a half-dozen anti-abortion protesters showed up.

One was disguised as Joe Biden — and he pulled out a whip and pretended to lash a cross-bearing Jesus Christ, while being cheered on by a man dressed as Satan.

And for one moment, with actual human protesters converging outside a nominating convention, they were among the most normal things in American politics. 3 months agoVideo
3:19
Wisconsin is a key battleground in the fight to be U.S. president, and Democrats try to win back supporters they lost in 2016 while Republican leaders make in-person visits to the state. 3:19

with files from Susan Ormiston