An explosive wildfire that roared with little warning into a northern California city claimed a second life and thousands more people abandoned their homes, some of them slipping out just ahead of the walls of flame, authorities said Friday.

Thousands forced to flee from erratic, unpredictable blaze as it tracks toward urban areas

An explosive wildfire that roared with little warning into a northern California city claimed a second life and thousands more people abandoned their homes, some of them slipping out just ahead of the walls of flame, authorities said Friday.

Extreme winds fanned a deadly blaze and was so strong trees were ripped from the ground and embers travelled up to a mile ahead of the flames, said the California Department of Forestry and Fire Protection.

In all, an estimated 37,000 people have fled from the so-called Carr Fire, which began Monday and tripled in size overnight Thursday amid scorching temperatures, low humidity and high winds. Fire officials warned that the blaze would probably burn deeper into urban areas before there was any hope of containing it.

A day earlier, the flames turned the sky orange while sweeping through the historic Gold Rush town of Shasta and nearby Keswick, then jumping the Sacramento River into Redding, a city of about 92,000 people and the largest in the region. Mandatory evacuations have also been extended overnight to include the city of Shasta Lake, which has about 10,000 residents.

Steve Hobson was one of the last to leave Lake Redding Drive in Redding. A former urban and wildland firefighter three decades ago, he planned to stay behind to save his house. But the heat burned his skin and the smoke made it hard to breathe. He could feel the fire sucking the air from around him, whipping up swirling embers in a "fire tornado," he said.

An Associated Press reporter on Friday counted 66 burned homes in the Lake Redding Estates neighbourhood and another 60 in nearby Lake Keswick Estates. The official count so far is 65 structures destroyed by the blaze in Shasta County.

The fire is "taking down everything in its path," said Scott McLean, a CalFire spokesman for the crews battling the blaze.

An unidentified man hired to try to contain the flames with a bulldozer was killed on Thursday, authorities said. On Friday, the Redding firefighters union identified Jeremy Stoke, a fire inspector, as the second emergency worker to be killed by the blaze.

Residents of western Redding who hadn't been under evacuation orders were caught off guard and had to flee with little notice, causing miles-long traffic jams as flames turned the skies orange.

"I've never experienced something so terrifying in my life," said Liz Williams, who loaded up two kids in her car and then found herself locked in bumper-to-bumper traffic with neighbours trying to retreat from Lake Redding Estates. She eventually jumped the curb onto the sidewalk and "booked it."

"I didn't know if the fire was just going to jump out behind a bush and grab me and suck me in," Williams said.

"Really we're in a life-saving mode right now in Redding," said Jonathan Cox, battalion chief with Cal Fire. "We're not fighting a fire. We're trying to move people out of the path of it because it is now deadly and it is now moving at speeds and in ways we have not seen before in this area."

Some residents drove to hotels or the homes of family members in safer parts of California, while other evacuees poured into a shelter just outside of town.

A reporter with KRCR-TV choked up as she reported live updates about the fire before the station had to go off the air later. Two news anchors told viewers that the building was being evacuated and urged residents to "be safe."

Journalists at the Record Searchlight tweeted about continuing to report on the fire without electricity in their newsroom, and a reporter at KHSL-TV wrote on Twitter that the station's Redding reporters were "running home to gather their things."

Mike Mangas, a spokesperson at Mercy Medical Centre, said the hospital was moving five babies in its neonatal intensive care unit, which cares for premature newborns, to medical facilities outside of the area.

He said the hospital was preparing to evacuate but there were no immediate plans to do so.

Mangas said several burn patients were admitted to the emergency room but that most were being treated and released.

Three firefighters and an unknown number of civilians had burns, but the extent of their injuries wasn't immediately known, McLean said.

"It's just chaotic. It's wild," he said. "There's a lot of fire, a lot of structures burning."

Firefighters tried in vain to build containment around the blaze Thursday but flames kept jumping their lines, he said.

"It's just a heck of a fight. They're doing what they can do and they get pushed out in a lot of cases. We're fighting the fight right now." 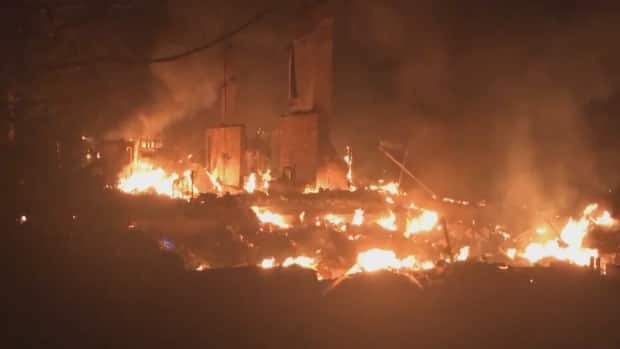 2 years ago
1:09
Massive response underway, but fire does claim victims 1:09

McLean said the fire behaviour was so erratic, there were tornadoes within the fire "tossing around equipment, blowing windows out of Cal Fire pickup trucks."

The 115-square-kilometre fire that began Monday tripled in size overnight Thursday amid scorching temperatures, low humidity and windy conditions. It was sparked by a mechanical issue involving a vehicle, Cal Fire said.

Brett Gouvea, incident commander of the crews battling the fire, urged residents to pay close attention to the blaze.

"This fire is extremely dangerous and moving with no regard for what's in its path," he said.