U.S. Senators sworn in as impeachment procedures against Trump begin

The chief justice of the U.S. Supreme Court was sworn in Thursday at the Senate to preside over President Donald Trump's impeachment trial, then immediately swore in the entire Senate body with an oath to ensure "impartial justice" as jurors for just the third such proceeding in U.S. history.

The chief justice of the U.S. Supreme Court was sworn in Thursday at the Senate to preside over President Donald Trump's impeachment trial, then immediately swore in the entire Senate body with an oath to ensure "impartial justice" as jurors for just the third such proceeding in U.S. history.

Chief Justice John Roberts made the short trip across the street from the Supreme Court before being ushered to the Senate chamber. He was to be sworn in himself before administering the oath to the senators.

"Will all senators now stand, and remain standing, and raise their right hand," Roberts said.

"Do you solemnly swear that in all things appertaining to the trial of the impeachment of Donald John Trump, president of the United States, now pending, you will do impartial justice according to the Constitution and laws, so help you God?" 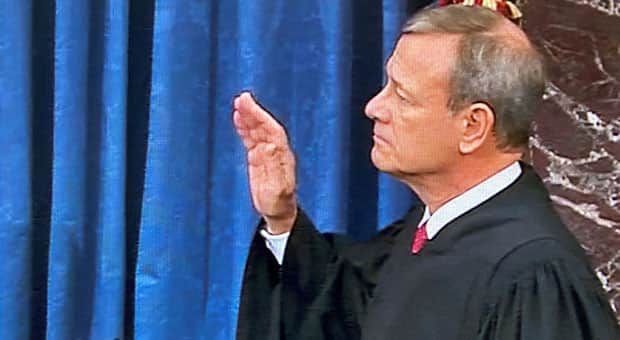 1 year ago
0:59
Chief Justice of the U.S. Supreme Court John Roberts was sworn in to preside over President Donald Trump's impeachment trial, then immediately swore in the entire Senate body. 0:59

The senators, at their desks, responded and then were called up to sign the oath book. The impeachment trial was then adjourned until Jan. 21 at 1 p.m. ET.

The Constitution mandates the chief justice serve as the presiding officer. Roberts, who has long insisted judges are not politicians, is expected to serve as a referee for the proceedings rather than an active participant. Senators will ultimately render the verdict.

The Senate opened its historic proceedings against Trump with a formal reading of the articles of impeachment by House prosecutors. The chamber began to transform itself into an impeachment court at noon following a second day of ceremonial protocol that shifts the proceedings out of Speaker Nancy Pelosi's Democratic-run House to the Republican-majority Senate.

Seven lawmakers prosecuting the charges, led by Democrat Adam Schiff of the House's intelligence committee, made the solemn walk across the Capitol for a second day.

Schiff, standing in the well of the Senate usually reserved for senators, began reading the resolution: "Impeaching Donald John Trump, president of the United States for high crimes and misdemeanours."

The history-making events, unfolding during an election year as Trump seeks another term, will be a test not only of his presidency but also of the country's three branches of power and its system of checks and balances. Several senators are running for the Democratic party's nomination to challenge Trump in November.

Republican Sen. James Inhofe was absent, home in Oklahoma for a family medical issue, his office said. He plans to return when the full trial begins next week.

Trump insists he did nothing wrong, and he dismissed the trial anew on Thursday at the White House: "It's totally partisan. It's a hoax." 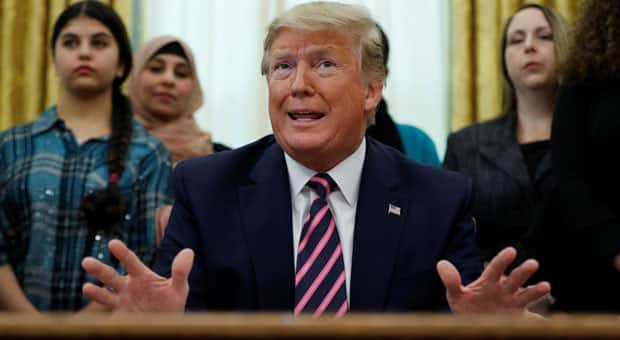 1 year ago
0:59
U.S. President Donald Trump says he thinks his Senate impeachment trial 'should go very quickly,' shortly after the chief justice and senators were sworn in. 0:59

Eventual acquittal is expected in the Republican-controlled Senate. However, new revelations are mounting about Trump's actions toward Ukraine.

Trump faces a charge that he abused his presidential power by pressuring Ukraine to investigate Democratic presidential contender Joe Biden, using nearly $400 million US in military aid to the country as leverage — an effort that the president's personal lawyer, Rudy Giuliani, has been accused of helping orchestrate. Trump was also charged with obstructing Congress's ensuing probe, as the White House has defied subpoenas for witnesses to appear and documents to be released.

Ahead of the proceedings, the Government Accountability Office said Thursday that the White House violated federal law in withholding the security assistance to Ukraine, which shares a border with hostile Russia.

The GAO said in a report that the Office of Management and Budget violated the law in holding up the aid, saying "the president is not vested with the power to ignore or amend any such duly enacted law."

The Pentagon-approved aid in question was held up last summer on orders from Trump but was released in September after Congress pushed for its release and a whistleblower's complaint about Trump's July call with the Ukrainian leader became public.

The independent agency, which reports to Congress, said OMB violated the Impoundment Control Act in delaying the security assistance Congress authorized for Ukraine for "policy reasons" rather than technical budgetary needs.

"Faithful execution of the law does not permit the president to substitute his own policy priorities for those that Congress has enacted into law," wrote the agency's general counsel, Thomas Armstrong, in the report. 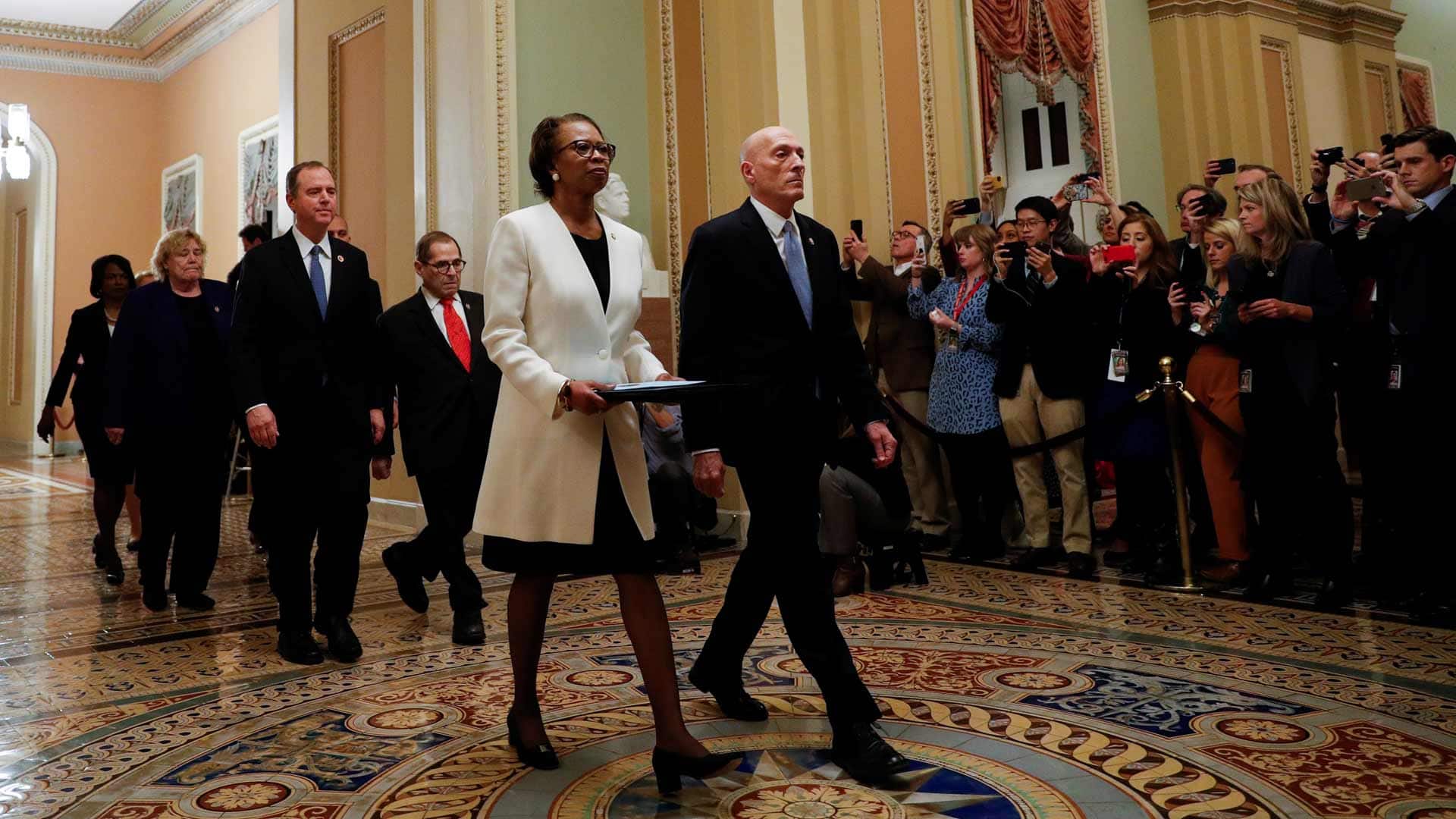 1 year ago
0:48
House impeachment managers walk through the Capitol building to the Senate chamber to present the Trump impeachment articles 0:48

Capitol Hill Democrats seized on the report as evidence of a lawless White House. They have wanted to question Mick Mulvaney, who serves as both White House chief of staff and OMB director.

"Congress makes funding decisions, and the Trump administration's illegal impoundment of these vital national security funds was a brazen assault on the checks and balances inherent to our democracy," said Nita Lowey, New York Democrat chair of the House's appropriations committee. "Given that this illegal conduct threatened our security and undermined our elections, I feel even more strongly that the House has chosen the right course by impeaching President Trump. No one is above the law."

OMB has argued the hold was appropriate and necessary.

"We disagree with GAO's opinion. OMB uses its apportionment authority to ensure taxpayer dollars are properly spent consistent with the president's priorities and with the law," said OMB spokesperson Rachel Semmel.

Back in the Senate, Republican majority leader Mitch McConnell opened Thursday's session decrying Pelosi's decision to hand out "souvenir pens" after she signed the resolution to transmit the charges to the Senate.

Trump in the loop on Ukraine pressure, Parnas says

1 year ago
0:34
'Trump knew exactly what was going on' with regard to pressuring Ukraine, Lev Parnas says 0:34

Senate Democratic leader Chuck Schumer renewed his party's request that the trial include new witnesses and documents not available for the House impeachment proceedings.

"What is the president hiding? What is he afraid of?" Schumer said.

"The gravity of these charges is self-evident," he said. "The House of Representatives have accused the president of trying to shake down a foreign leader for personal gain."

The House on Wednesday voted 228-193, almost entirely along party lines, to send the articles of impeachment to the Senate, ending a weeks-long delay to deliver the charges with a tally reflecting the nation's split.

The president has suggested recently that he would be open to a quick vote to simply dismiss the charges, but sufficient Republican support is lacking for that. Still, an eventual vote to acquit Trump is considered highly likely.

Opening arguments could begin next Tuesday after the Martin Luther King Jr. holiday.

The last Senate impeachment trial involving a president, in 1999, with Bill Clinton under fire, lasted five weeks. Most legal observers don't expect the Trump trial to last that long. Some Republicans and the White House have at times expressed interest in a speedy trial, while four Democrats who would prefer to hear evidence as long as necessary are running for president: Michael Bennet, Amy Klobuchar, Bernie Sanders and Elizabeth Warren.

WATCH | On the uniqueness of a Senate impeachment trial: 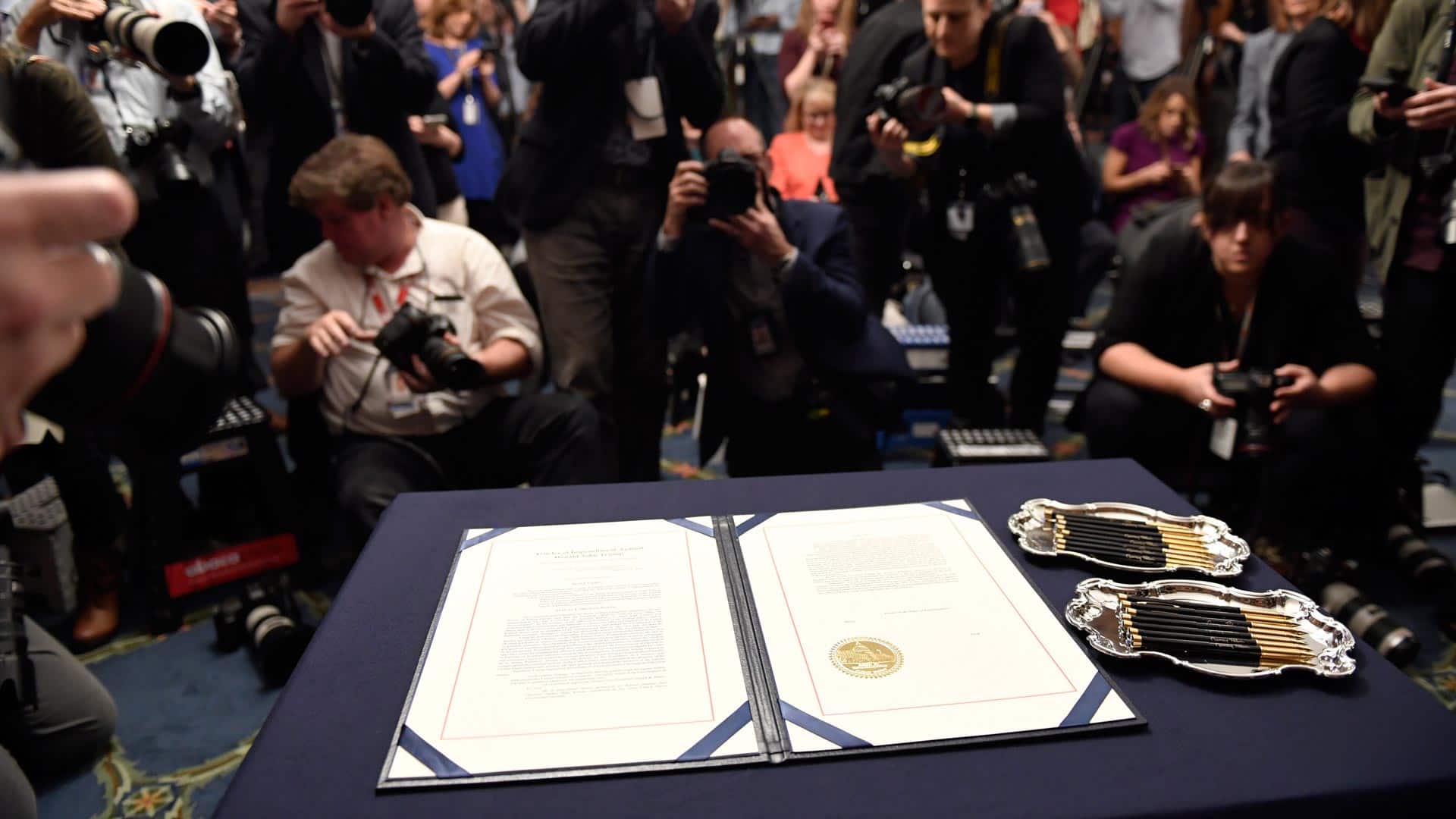 What makes the Senate impeachment trial different than a regular court case?

1 year ago
1:18
Joseph Moreno, a former Department of Justice national security prosecutor, says Republicans will control many things during the Senate impeachment trial. 1:18

It remains to be seen if the Senate will consider witnesses who did not appear before House committees investigating the matter. Democrats and a few Republicans have stated they want to hear from John Bolton, the former national security adviser at the White House, who others have said raised alarms about the alternative foreign policy toward Ukraine being run by Giuliani.

Any four senators could force such an outcome. Republicans control the chamber, 53-47, but it takes just 51 votes during the trial to approve rules or call witnesses.

It also would take only 51 senators to vote to dismiss the charges against Trump.

Senators are considered "jurors" in an impeachment trial, though in the Clinton case they formally objected to the use of that term, an objection then-chief justice William Rehnquist upheld.