U.S. President Donald Trump was once again greeted by protesters as he arrived in Texas on Wednesday during a visit to one of two mass shooting sites where more than 30 people were killed over the weekend.

U.S. President Donald Trump was once again greeted by protesters as he arrived in Texas on Wednesday during a visit to one of two mass shooting sites where more than 30 people were killed over the weekend.

As happened earlier in the day in Dayton, Ohio, protesters in El Paso demanded gun-control reform and an end to caustic rhetoric that some say is contributing to a culture of violence in the U.S.

They lifted signs referring to the president that read, "Send him back," and "Your words have consequences."

The president and his wife, Melania Trump, then made their way to the University Medical Center of El Paso to visit survivors of the shooting, arriving in a motorcade that included law enforcement officers toting long guns and sporting riot gear.

During his first visit on Wednesday, the president visited with victims and first responders at Miami Valley Hospital in Dayton, Ohio, where the wounded were treated after nine people and the gunman were killed in a rampage early on Sunday.

Protesters there chanted "Do something!" and "You are why," accusing Trump of inflaming tensions with anti-immigrant and racially charged rhetoric.

White House spokesperson Stephanie Grisham said on Twitter that Trump stopped by hospital rooms and met with patients while thanking the medical staff for their work.

"You had God watching. I want you to know we're with you all the way," she quoted Trump as saying at the hospital.

Police in El Paso said 22 people were killed at a Walmart store on Saturday by a 21-year-old man who had posted an anti-immigrant manifesto online.

There have been protesters in both the Ohio city and in El Paso, opposed to the president visiting so soon after the incidents.

The back-to-back massacres have reopened the national debate over gun safety in the United States.

As he left the White House, Trump said he wanted to strengthen background checks for gun purchases and make sure mentally ill people did not carry guns. He predicted congressional support for those two measures, but not for banning assault rifles.

"I can tell you that there is no political appetite for that at this moment," Trump told reporters at the White House. "But I will certainly bring that up ... There is a great appetite, and I mean a very strong appetite, for background checks."

A federal ban on several types of military-style assault weapons was enacted in 1994 but allowed to lapse a decade later.

The Democrat-led House passed legislation in February that would require federal background checks for all firearms sales and transfers, including those sold online or at gun shows. Another bill allows an expanded 10-day review for gun purchases. The bills have languished in the Republican-controlled Senate.

Another bipartisan proposal is gaining momentum to create a federal grant program to encourage states to adopt "red flag" laws to take guns away from people believed to be a danger to themselves or others.

In Dayton, Trump was greeted at the airport by a bipartisan group of state and local officials, including Democratic Dayton Mayor Nan Whaley and Democratic Ohio Sen. Sherrod Brown.

They told reporters afterward that they urged Trump to call on Senate Republican Leader Mitch McConnell to bring the Senate back from its summer recess to work on a House-passed bill that expands background checks on gun buyers.

Brown said he asked Trump to promise he would sign that bill, but the president "only said that we will get things done." 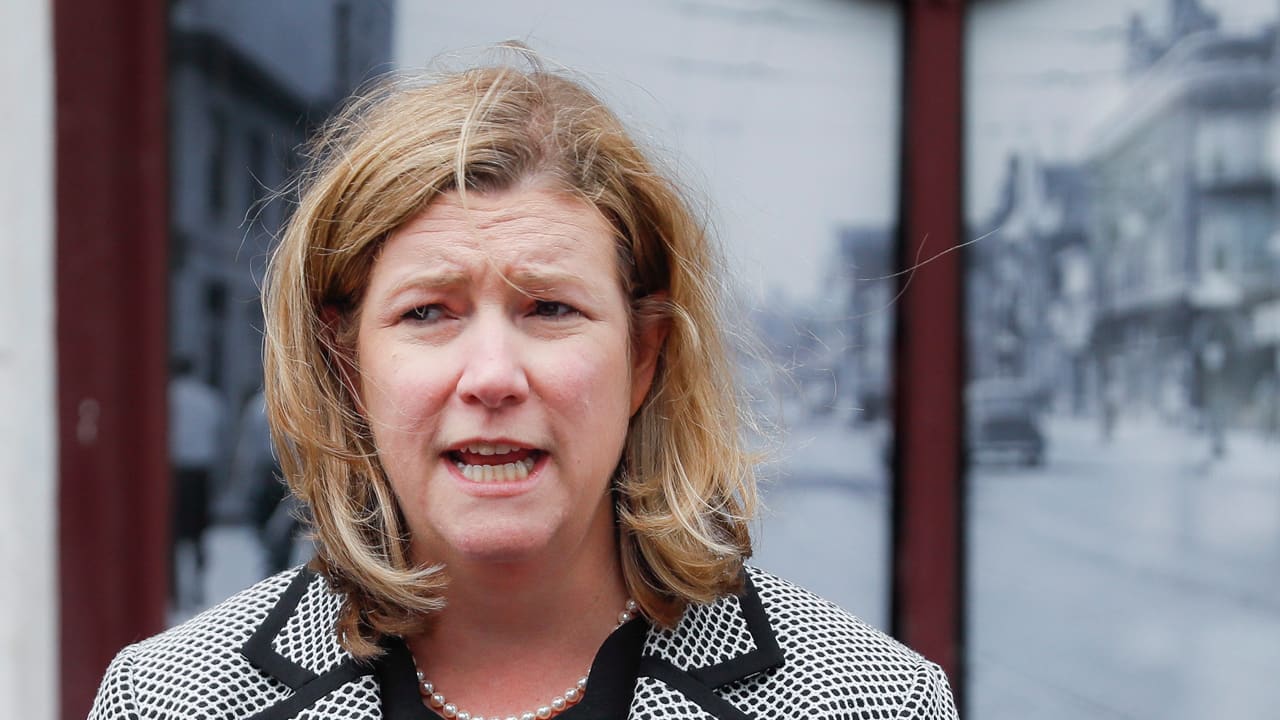 1 year ago
5:59
There are several ways in which Trump can help on gun policy, Whaley says 5:59

Whaley said the president did not visit the entertainment district, the scene of the Ohio shooting — a move she described as a good decision.

While she said she believes the people affected by the weekend violence appreciated Trump's visit, not everyone agrees with his rhetoric and policies.

"I think a lot of people that ... own businesses in that district aren't interested in the president being there," she told reporters at a news conference following the president's visit. "A lot of the time his talk can be very divisive, and that's the last thing we need in Dayton."

Trump has rejected the notion his words could influence bad actors. The suspect in the shooting at an El Paso Walmart has been connected to a manifesto published online that uses language similar to that employed by Trump to describe immigrants, such as calling an influx of migrants at the southern border an "invasion."

We want to be one of the last cities this happens to.- Dayton Mayor Nan Whaley

"I think my rhetoric brings people together," he told reporters before departing the White House.

Whaley has questioned whether Trump's visit would help, and expressed disappointment in the president's aftermath remarks that included an erroneous reference to Toledo instead of Dayton.

"It doesn't have to be this way," Whaley told CBC News on Wednesday morning, pointing to the dozens of American cities and towns this year to see mass shooting events. "We want to be one of the last cities this happens to, and the president can do something about that."

Connor Betts, 24, opened fire in Dayton's Oregon entertainment district early Sunday morning, killing nine people, including his 22-year-old sister, before officers fatally shot him within 30 seconds of the start of his rampage. The FBI announced Tuesday it has opened an investigation into Betts's desire to commit a mass shooting and his interest in violent ideology.

Hospital officials said 37 people were treated for injuries, including at least 14 with gunshot wounds.

There has been no official indication that the shooter dealt with mental illness, despite the president's remarks.

Betts also had no apparent criminal record as an adult, and police have said there was nothing that would have prevented him from buying some kind of weapon.

Democrats vying to challenge Trump in the 2020 election have been nearly unanimous in excoriating him for rhetoric they warned has nurtured the racist attitudes of the El Paso shooter.

Former vice-president Joe Biden, the front-runner in the 2020 Democratic primary, said on Wednesday in Iowa that  Trump is fuelling a literal carnage" in America with his racist attacks and is incapable of offering the moral leadership that has defined the presidency over the course of history.

Biden added that voters "cannot let this man be re-elected."

In El Paso, presidential hopeful and El Paso native Beto O'Rourke spoke to several hundred people at a gathering separate from Trump's visit. O'Rourke, a potential Democratic candidate for the 2020 election, has blistered Trump as a racist instigator but also told attendees that the open way the people of his home town treat each other could be "the example to the United States of America."

Suspect Patrick Crusius, 21, was taken into custody for the shooting. Front Burner25:49‘A sickening déjà vu’: Two US mass shootings in one weekend stuns reporter
This past weekend saw two back-to-back mass shootings in the United States: one in El Paso, Texas, and one in Dayton, Ohio. At least thirty-one people are dead. Dozens more injured. Today on Front Burner, we talk to writer Jennifer Mascia about gun violence and reform in America. She’s a reporter with The Trace, a non-profit, non-partisan organization dedicated to covering gun-related news. 25:49