U.K. Prime Minister David Cameron vowed Sunday to "hunt down those responsible" for the beheading of British aid worker David Haines and "bring them to justice no matter how long it takes." 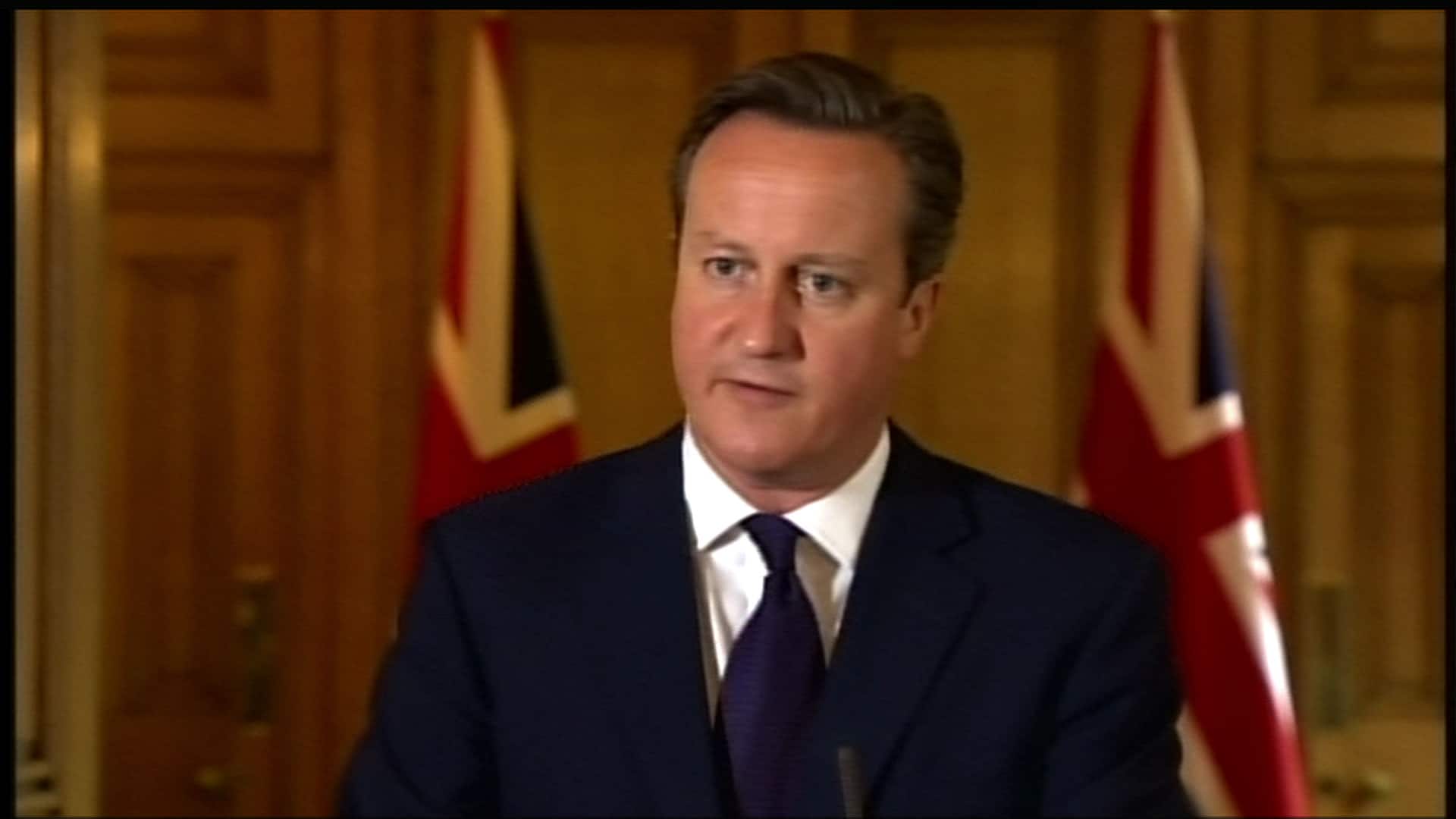 Prime Minister David Cameron vowed Sunday to "hunt down those responsible" for the beheading of British aid worker David Haines and "bring them to justice no matter how long it takes."

Cameron was speaking a day after the militant group ISIS released a video showing the beheading of Haines and issuing a threat against another British hostage. Britain's Foreign and Commonwealth Office said it saw no reason to doubt the authenticity of the video.

Haines is the third Westerner to be beheaded by ISIS in recent weeks. Two earlier videos showed the beheading of U.S. journalists James Foley and Steven Sotloff, respectively.

Another British hostage who was shown briefly at the end of the Haines video and threatened with death was identified Sunday as Alan Henning.

Cameron called an emergency meeting of military and security chiefs after the video's release Saturday night and addressed the media from 10 Downing Street Sunday afternoon.

In his brief statement, Cameron called ISIS, also known under the names Islamic State and ISIL, "the embodiment of evil" and condemned the group's indiscriminate killing of thousands of Muslims, Christians and ethnic minorities in Iraq and Syria.

"They claim to do this in the name of Islam. That is nonsense," Cameron said. "Islam is a religion of peace. They are not Muslims; they are monsters."

Cameron said ISIS poses a "massive threat " not just to the Middle East but to the security of Britain, the U.S., Europe and other allies.

"There is no option of keeping our heads down that would keep us safe," he said.

He said the U.K. will work with the central Iraqi government to ensure it can effectively take on ISIS and will continue to supply ammunition and training to the Kurdish regional government. Britain will also continue helping the U.S. with surveillance, intelligence gathering and logistics in its fight against the Sunni extremists.

"This is not about British combat boots on the ground; this is about working with others to extinguish this terrorist threat," Cameron said.

Cameron also made reference to the fact that one of the ISIS hostage takers seen on the latest video as well as two earlier videos of U.S. hostages could be a British citizen.

The masked man shown on the Haines video, which ends with footage of Haines's body, seems similar to the man in the earlier beheading videos. The tall man speaks with a similar British accent and — as in the two earlier videos — threatens the captive with a large knife brandished in his left hand.

"People across this country would have been sickened by the fact that it could have been a British citizen … who could have carried out this unspeakable act. It is the very opposite of everything our country stands for.

​"It falls to the government and to each and every one of us to drain this poison from our society and to take on this warped ideology that is radicalizing some of our young people."

The latest video shows Cameron condemning ISIS. The man with the knife then condemns Britain's support of American action against the group and says the captive must pay with his life.

He also threatens Henning, whose family initially asked that his name not be published out of concern for his safety but dropped that request Sunday afternoon and also released a photo of him.

U.S. Secretary of State John Kerry has been pressuring allies ahead of an international conference Monday in Paris to show a united front, especially from majority-Muslim nations, saying nearly 40 countries agreed to contribute to a worldwide fight to defeat the militants before they gain more territory in Iraq and Syria.

The White House said Sunday it would find allies willing to send combat forces -- something the United States has ruled out -- but that it was too early to identify them. The U.S. has so far been alone in carrying out airstrikes.

Several Arab countries offered to conduct airstrikes against the Islamic State group, according to a State Department official traveling with Kerry who briefed reporters on condition of anonymity to discuss diplomat developments during his trip.

Muslim-majority countries are considered vital to any operation, although there have only been vague offers of help previously. Iran was struck off the invitation list, and Western officials have made clear they consider Syria's government part of the problem.

"Ultimately, this is a fight within Islam, within Sunni Islam," White House chief of staff Denis McDonough told Fox News on Sunday.

"That's why we know that ultimately to defeat and ultimately destroy ISIL, something that is not only in our interest but in the interest of the countries in the region, they are going to need to take the fight to it," he said, using one of the acronyms for the group.

"We'll build, we'll lead, we'll undergird, and we'll strengthen that coalition. But ultimately, they're going to help us beat them on the ground," McDonough said.

The CIA estimates the Sunni militant group has access to between 20,000 and 31,000 fighters in Iraq and Syria. A senior Iraqi intelligence official told The Associated Press that more than 27,600 Islamic State fighters are believed to be operating in Iraq alone, including about 2,600 foreigners. He spoke anonymously as he is not entitled to brief the media.