Prime Minister David Cameron says he will resign by the fall and insists the British people's will must be respected after voters chose to leave the 28-nation European Union. 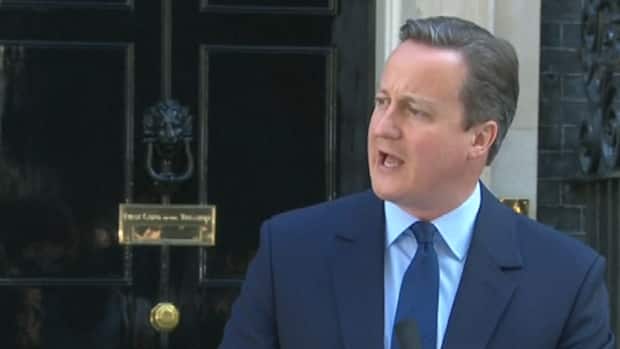 'I think the country requires fresh leadership to take it in this direction': David Cameron

Prime Minister David Cameron says he will resign by the fall and insists the British people's will must be respected after voters chose to leave the 28-nation European Union.

"I do not think it would be right for me to be the captain that steers our country to its next destination," Cameron told reporters outside 10 Downing Street just before 8:30 a.m. in London.

Cameron, in power for six years, said he will resign by the time of the Conservative party conference in the fall. He turns 50 on Oct. 9.

"I held nothing back," he said. "I was absolutely clear in my belief that Britain was stronger, safer and better off inside the European Union … but the British people have made a very clear decision to take a different path."

Cameron said he had spoken to Queen Elizabeth II about the steps he was undertaking to prepare the government for new leadership.

British stocks are plunging as the market opens as investors scramble to react to the news. The pound has hit a 31-year low.

Cameron sought to reassure investors and markets that "Britain's economy is fundamentally strong."

When he promised the referendum, in 2013, Cameron said it would "settle this European question in British politics" once and for all.

He told voters he would forge a new deal between Britain and the EU that would make remaining an attractive prospect. At a Brussels summit in February, he won changes to welfare benefits that he said would reduce immigration and an exemption for Britain from the EU's commitment to "ever-closer union" — a phrase that stirs images of a European super-state in some patriotic British hearts.

But many voters proved resistant to Cameron's message that Britain is stronger, safer and more economically secure within the EU than it would be outside it.

The referendum campaign was unexpectedly bitter and divisive, and was brought to a shocked halt when Labour lawmaker Jo Cox was shot and stabbed to death in the street last week. The news appeared to dampen the momentum of the Leave movement, but in the end the Brexit vote prevailed.

"I think he's actually been pretty stunned by the strength of the Leave cause," Cameron biographer James Hanning told The Associated Press several days ahead of the referendum. "The golden rule is, never hold a referendum unless you're confident of winning it, and I think he thought that the moderate voices would prevail by some distance."

The concessions he gained were dismissed as paltry by Leave campaigners, who said they would do little to limit immigration from other EU nations because the bloc guarantees free movement among member states.

Cameron was elected party leader in October 2005 and succeeded Gordon Brown as Prime Minister in spring 2010. He won re-election in May 2015.

He and wife Samantha have three children. Their son Ivan, who had severe epilepsy and cerebral palsy, died at age six in 2009.

In his speech Friday, Cameron touted his government's education reforms, same-sex legislation of 2013 and "above all," he said, measures to restore Britain's economic position.

Among the possible contenders are former London Mayor Boris Johnson and Justice Secretary Michael Gove, who both helped lead the Leave campaign, and Home Secretary Theresa May.

Other Cabinet members are likely to contend as well. Treasury chief George Osborne's chances seem damaged by the Brexit vote as he had argued strongly to remain in the EU.

Johnson on Friday said Britons had voted to take back control from the EU, which he said was too opaque. He said nothing will change over the short term and that Britain will continue to be a "great European power."

The vote, he said, will "take the wind out of the sails of extremists and those who would play politics with immigration."

"We can find our voice in the world again."

Defence Secretary Michael Fallon said it is too early to speculate about who will replace Cameron, who became party leader in 2005 and led the party to two general election victories.

"I think it is a bit too early to start speculating about that," he said. "There is plenty to do now to help make this decision work, to stabilize our economy, to reassure our allies and to continue the program we were all elected on last year."

Fallon said Cameron has done the honourable thing by resigning.