Construction of the controversial Dakota Access Pipeline has been halted, the U.S. Army Corps of Engineers has told Standing Rock protesters.

Standing Rock protesters celebrated Sunday as news broke that construction of the controversial Dakota Access Pipeline near their territory has been halted.

Moira Kelley, a spokeswoman for the Department of the Army, a federal agency under the U.S. Defence Department, said in a news release Sunday that the administration will not allow the four-state, $3.8-billion pipeline to be built under Lake Oahe, a Missouri River reservoir near the Standing Rock Sioux Reservation.

The decision came a day before the government's deadline for the several hundred people at the Oceti Sakowin, or Seven Council Fires, encampment to leave the federal land. But demonstrators say they're prepared to stay, and authorities say they won't forcibly remove them.

Assistant Secretary for Civil Works Jo-Ellen Darcy said her decision was based on the need to "explore alternate routes" for the pipeline's crossing.

"Although we have had continuing discussion and exchanges of new information with the Standing Rock Sioux and Dakota Access, it's clear that there's more work to do," Darcy said. "The best way to complete that work responsibly and expeditiously is to explore alternate routes for the pipeline crossing."

The 1,885-kilometre pipeline — owned by Texas-based Energy Transfer Partners LP — is mostly complete, except for a segment planned to run under Lake Oahe just outside the reservation near Cannon Ball, N.D.

"People are breathing a sigh of relief today and the sun is shining bright and there's blue skies here in Cannonball," protester Clayton Thomas-Muller, a member of the Colomb Cree Nation in Northern Manitoba, told CBC News.

"There's certainly an atmosphere of celebration at this show of power and influence of the climate Indigenous rights movement here in the United States."

The company constructing the pipeline, Dallas-based Energy Transfer Partners, released a statement Sunday night slamming the decision as politically motivated and alleging that President Barack Obama's administration was determined to delay the matter until he leaves office.

"The White House's directive today to the Corps for further delay is just the latest in a series of overt and transparent political actions by an administration which has abandoned the rule of law in favour of currying favour with a narrow and extreme political constituency," the company said.

President-elect Donald Trump, a pipeline supporter, will take office in January, although it wasn't immediately clear what steps his administration would be able to take to reverse the U.S. Army's latest decision or how quickly that could happen.

For months, thousands of people have descended upon a handful of camps in the area to voice opposition to the pipeline, which they said threatened drinking water and would harm sacred sites.

The largest is the Oceti Sakowin Camp north of Cannonball River, land managed by the U.S. Army Corps of Engineers, which maintains some civilian infrastructure, waterways and military facilities.

The protest has garnered support from thousands who have flocked to North Dakota to protest against the completion of the line.

Hundreds of demonstrators near the Dakota Access pipeline protest camp broke into cheers and chanted "water is life" in the Lakota Sioux language as news spread constructed was halted. 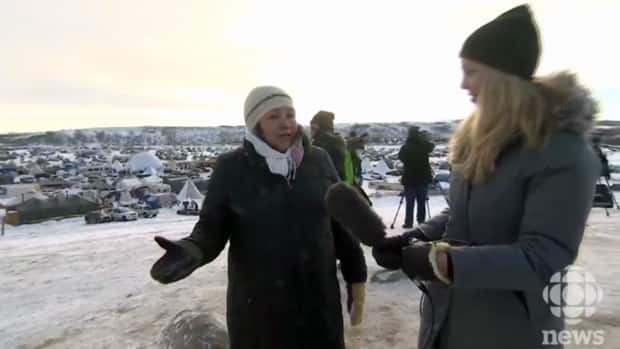 'Water is life' at Standing Rock

4 years ago
1:12
CBC's Kim Wheeler explains why protesters are against pipeline proposal 1:12

The tribe issued a statement thanking protesters, supporters and the Obama administration.

"With this decision we look forward to being able to return home and spend the winter with our families and our loved ones, many of whom have sacrificed as well," the statement reads.

However, some of the protesters, who call themselves water protectors, say they are staying put.

Miles Allard of the Standing Rock Sioux tribe said he was pleased by the decision but remained cautious, saying opponents of the pipeline "don't know what Trump is going to do."

Allard says he's been telling his people "to stand up and not to leave until this is over."

Attorney General Loretta Lynch said the Department of Justice will "continue to monitor the situation" and stands "ready to provide resources to help all those who can play a constructive role in easing tensions."

'It's nice to see the tide turning'

Earlier on Sunday, protester Laralyn RiverWind, who is of Cherokee and Muskogee heritage, told CBC News: "We're really grateful that other cultures are coming out to support." 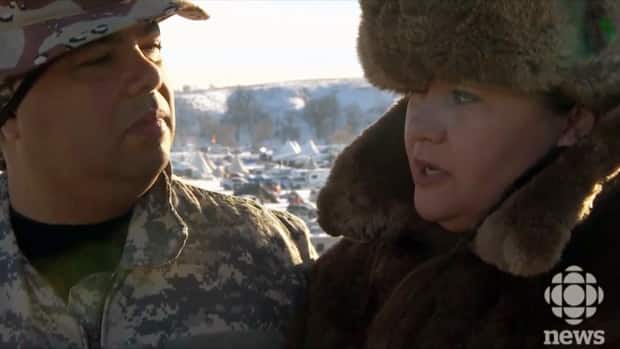 "In the past, Native people have been disregarded and unheard and forgotten and we've come across so many people who have been taught in school that Native people don't exist anymore, that we're all extinct. And so it's nice to see the tide turning and Indigenous people being valued for the portion of knowledge and wisdom that we have to share with the world," she said.

Not everyone is pleased with the outcome.

North Dakota Congressman Kevin Cramer said the decision from the feds "sends a very chilling signal" for those who want to build infrastructure in the U.S.

North Dakota Gov. Jack Dalrymple called it a "serious mistake" that "prolongs the dangerous situation" of having several hundred protesters who are camped out on federal land during cold, wintry weather.

House Speaker Paul Ryan called it "big-government decision-making at its worst." The Wisconsin Republican tweeted Sunday night that he looks "forward to putting this anti-energy presidency behind us."

Morton County Sheriff Kyle Kirchmeier, whose department has done much of the policing for the protests, said that "local law enforcement does not have an opinion" on the decision and that his department will continue to "enforce the law."

Here is the statement from the Standing Rock Sioux Tribe on decision not approve easement to cross under Lake Oahe. <a href="https://t.co/73hBPRlKWa">pic.twitter.com/73hBPRlKWa</a>

With files from Angela Johnston, The Associated Press and Reuters