The U. S. and Cuba announced major changes to their relationship on Wednesday, the most significant changes since diplomatic ties broke off in 1961. The new agreement affects travel, commerce and government relations, and has been in the works for more than a year. Here's what you need to know.

What do historic changes to U.S.-Cuba relations mean for travel, trade, human rights? 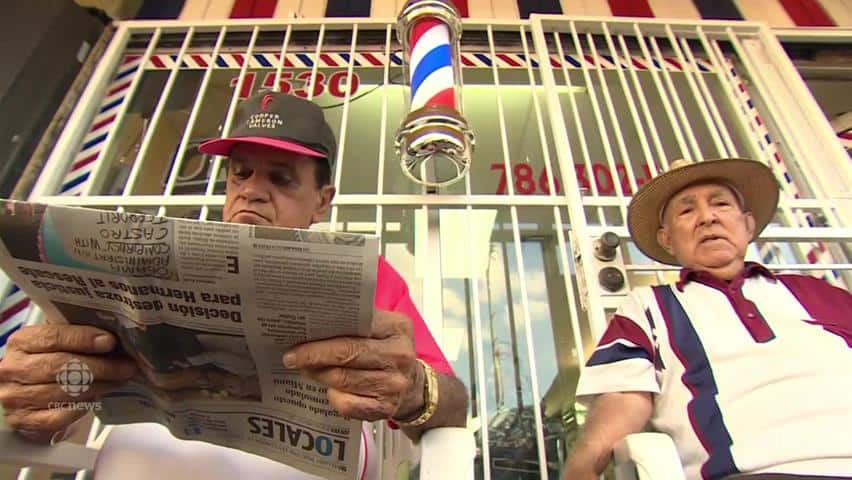 6 years ago
2:46
How people are reacting to the change in diplomatic relations between Cuba and the U.S. 2:46

The United States and Cuba announced historic changes to their relationship today, in part prompted by a view at the White House that the long-standing American policy of Cuban isolation isn't working and is outdated. The two countries will begin to normalize relations after more than 50 years of frozen ties.

Here are 10 key questions and answers about what this means.

For starters, the White House says the isolation policy and embargo against Cuba are outdated and simply haven't worked. They haven't advanced America's interests or helped improve human rights or democracy, and the Obama administration feels a policy of engagement will be more effective in achieving its goals and helping Cubans, which is something the White House says it cares about.

The U.S. also admits that its influence in Latin America has been hampered because of its Cuba policy. The White House acknowledged Wednesday that it's pretty much alone in the world when it comes to its treatment of Cuba. "The rest of the world has moved on," a senior official said. So this is not just about U.S.-Cuba relations, but about U.S.-global relations.

2. Does normalizing relations mean the embargo is over?

No. What Obama announced are measures that are within his power. He does not have the authority to totally lift the embargo against Cuba, which would be up to Congress. Will Congress do it? Obama would like to see that happen, but it's not likely to occur soon. For now, he's doing what he can, acting on his own.

3. What does this mean for Cuba-U.S. diplomatic relations?

It means they will resume for the first time since 1961. Over the years, the U.S. has worked through various channels to have some contact with the Cuban government, but there is no official diplomatic presence in the country with an ambassador. That will now change and the U.S. will set up an embassy in Havana. High-level visits between government officials will resume.

Not quite. Here's the deal with the travel ban. In 2009 and 2011 the Obama administration authorized some easing of restrictions, which allowed some Americans to travel to Cuba for specific purposes. Those included visiting family, journalism, religion and education. Now the licences that are granted for authorized travel will expand, meaning more Americans will be allowed to go to Cuba. But the catch? Tourism as a purpose for travel is not included. A total lifting of the travel ban is up to Congress.

5. What happens to Cuba's place on the U.S. list of state sponsors of terrorism?

It's under review. Obama has instructed the State Department to complete the review within six months and report back to him. Cuba was placed on the list in 1982.

The U.S. wants to help Cubans access the World Wide Web. Internet access is extremely limited and expensive there. The new U.S. policy will authorize the commercial export of communications devices, software, hardware and the provision of internet services. That, in addition to Cuba's announcement that it intends to increase internet access for its citizens, means Cubans should become more wired.

7. What other trade will be allowed?

The White House says in addition to the telecommunications sector, other exports that will be allowed relate to certain building materials for residential construction, goods used by entrepreneurs and agricultural equipment. The U.S. said the aim is to help build Cuba's private sector.

8. What about human rights concerns?

The White House says the policy change in no way signals less concern for human rights in Cuba. On the contrary, it will put the U.S. in a better position to advocate for rights. Obama said the U.S. will engage directly with Cuba on democracy and human rights and that he did raise his concerns with Cuban President Raul Castro by phone on Tuesday when they finalized the agreement.

Obama said he has "no illusions" about the barriers to freedom that Cubans face and that he doesn't expect the new relationship to transform Cuban society overnight. But engagement is the better way to go, in his view, to help Cubans.

9. What did Canada and Pope Francis have to do with this?

The U.S. started this process in the spring of 2013, and the first face-to-face talks with Cuban officials happened on Canadian soil in June of that year. Canada hosted a series of meetings right up until last month. Canada wasn't an active participant in the talks, but the White House says Canada's support was "indispensable." Pope Francis, on the other hand, directly appealed to Obama and Castro to mend their broken ties and for Alan Gross and other prisoners to be released. The Vatican also hosted meetings between the two sides.

According to the White House, former leader Fidel Castro was not involved in the discussions, and his brother Raul Castro, the current president, was the decision-maker who authorized the agreement.