As COVID-19 cases spike in Russia, the Kremlin struggles to respond

Even President Vladimir Putin is now admitting the COVID-19 crisis in Russia is dire. Hospitals are getting swamped and businesses are folding, Chris Brown reports.

Quite uncharacteristically, the Russian state TV host did not bury the bad news as he led off the show.

"We're now following the same model as Italy," Yevgeny Popov said in a stunning about-face from just two weeks ago, when the host of the popular Russian talk show 60 Minutes said the government was getting the coronavirus outbreak under control.

Now, Russia's most widely watched Kremlin-funded news programs are telling people they should prepare for thousands of deaths.

Along with that shift in messaging has also come a change in behaviour from President Vladimir Putin.

Putin had been keeping an unusually low profile as the virus spread, preferring to make good news pronouncements such as paid holidays for workers and help for businesses, while leaving unpopular decisions such as enforcing quarantines to lower-level officials.

But this week, a concerned-looking Putin has made daily addresses, emphasizing that the situation has become dire and Russians should prepare themselves for plenty more bad news.

"Truly extraordinary measures are required to stop the spread of the infection," he said in an address Tuesday from a conference room at his estate outside Moscow, where he's been holed up for the past two weeks after meeting doctors who later tested positive for COVID-19, the illness caused by the coronavirus.

Officially, Russia has registered more than 25,000 cases of the coronavirus and 198 deaths, but many doctors and local officials believe those numbers don't reflect the true extent of the outbreak.

Putin, who after 20 years in power rarely reverses course on any significant policy matter, has suddenly backtracked on several.

A nationwide referendum that could allow him to serve up to two more six-year terms as president was postponed, and he stepped back from an oil price war with Saudi Arabia that he'd initiated and agreed to limit Russian oil output in a deal aimed at propping up the crashing ruble. 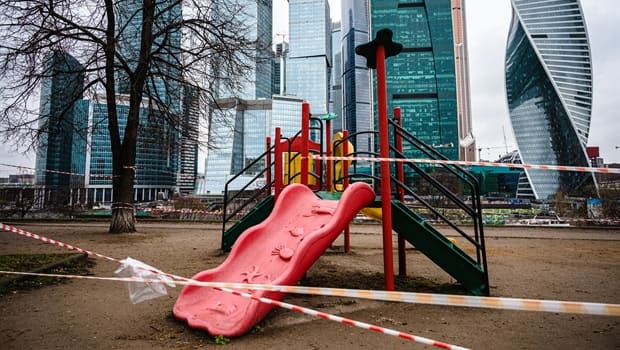 11 months ago
1:14
Police crack down on those breaking self-isolation orders as the rapidly rising number of COVID-19 cases strains the hospitals in Russia's two largest cities, Moscow and St. Petersburg. 1:14

But the biggest reversal came on Wednesday with a decision to postpone the May 9 Victory Day parade marking the 75th anniversary of the end of the Second World War in Europe — a hugely symbolic event, arguably more important to many Russians than even the Olympics.

Heaped in national pride and symbolism, the annual event is always a display of military might, but doubly so this year, as it was designed to be a personal celebration of Putin's long reign at the top of Russia's political hierarchy. The Kremlin had repeatedly denied it would ever consider moving the celebration.

But with the strain on Russia's underfunded health-care system now showing up everywhere, the plan to assemble tens of thousands of soldiers and spectators for the spectacle in Moscow's Red Square now appears to be too great a risk for the country's leadership.

"There's no oxygen [for patients]," the medic who shot the video said in a comment that accompanied it.

In the city of Ufa, 1,500 kilometres east of Moscow, as many as 1,100 patients and staff at Kuvatov Clinical Hospital have been under quarantine for the past 10 days after COVID-19 rampaged through the facility.

In an interview with CBC News on Monday, Dr. Rimma Kamalova, who heads the hospital's rheumatology department and is quarantined in the facility, said when the outbreak started, regional health authorities refused to test patients for coronavirus.

"According to our policies  ... we could not do testing on coronavirus," she said.

"We had orders, at that time, not to give this diagnosis and take the relevant [mitigation] measures."

She spoke with CBC News while awaiting the results of her own COVID-19 test, noting that she was already exhibiting high fever and other symptoms. Every single other doctor on her ward is also sick, she said.

"We were extremely worried about this. [The patients] would come into the hospital, be admitted and then treated, then discharged and they would go back to their towns, and cities and regions."

Once the extent of the outbreak became apparent, she says, the same health authorities that ordered them not to test for coronavirus accused them of letting it get out of control.

By April 6, the situation had become too extreme to ignore and the entire hospital was put into quarantine, with no one, including staff, allowed in or out.

In the northern region of Komi, the Moscow Times reports that six hospitals are under a similar quarantine.

In Moscow, 13 million residents live mostly in highrises closely packed together. The city has two-thirds of the active cases in the country.

Hospital admissions are spiking, according to the city's mayor, and widely circulated social media videos this week have shown long lines of ambulances waiting to drop off patients. Some drivers complained they had been in line for as long as 15 hours.

Increasingly, doctors are coming forward and risking their positions and reputations to speak out about the deteriorating situation.

In a series of interviews, several doctors told CBC News that Russian health authorities squandered early opportunities to contain the virus, in part because testing was faulty.

"The sensitivity of the tests is about 65-70 per cent," said Dr. Pavel Brand, who works at a private clinic in Moscow.

"So we sometimes don't know if the person died from COVID or from something else. And so we put them in another part of statistics, and that's why the statistics are low."

Russia has developed its own COVID-19 tests that the government claims have been administered to more than a million people, but there have been repeated criticisms about large numbers of false-negatives.

There were also long delays with verifying positive results, as only one facility in Siberia was equipped to do it.

Infection specialist Alexei Yakovlev at the Medsi hospital in Moscow said most early cases of COVID-19 were treated as pneumonia by health authorities, and only now has Russia's government agreed to combine the tally of both.

"The numbers of patients with severe pneumonia are going up, and my feeling is that we have not reached the peak yet," he told CBC News.

He said in the days ahead he expects a dramatic spike in both deaths and active cases, once the combined figures for COVID-19 and pneumonia are released.

The Kremlin also appears to be growing increasingly concerned about the economic fallout from the shutdown of Moscow and other Russian cities.

Anastasia Tatulova, who owns Anderson Cafe catering services in Moscow, said the government put businesses like hers in an impossible position when it ordered employees to stay home from work for the month of April, yet still expected her to pay dozens of workers.

"We have no safety net," she said. "These decrees come out and, well, it seems they don't even understand the basics of how a business is set up in Russia."

On Wednesday, Putin responded by offering small businesses up to $160 Cdn a month per employee, as long as the company retains most of its workers.

To put that in perspective, Russia's statistics agency says average monthly wages range between $850 and $1,300 Cdn, depending on the exchange rate.

Prominent economist Alexei Kudrin, the architect of many of Russia's most successful financial reforms and now an auditor of government spending, told a Russian business publication that the economic implications of the outbreak are close to catastrophic.

He predicts more than eight million Russians may be unemployed by the end of 2020 — a threefold increase from the start of the crisis.

Compared to Canada, which has a robust unemployment system and has introduced other benefits to help during the emergency, Russia's social supports are relatively meagre.

The TASS Russian news agency reports that the amount available to a single person per month ranges from between $30 and $150 Cdn.