Coronavirus deaths in China rise to 132 with confirmed cases nearing 6,000

The death toll from the coronavirus outbreak in China rose to 132 early Wednesday local time, according to state media reports, with the total number of confirmed cases across the country hitting 5,974.

The death toll from the coronavirus outbreak in China rose to 132 early Wednesday local time, according to China's National Health Commission, with the total number of confirmed cases across the country hitting nearly 6,000.

The news came as several foreign governments — including the European Union and Japan — were preparing to fly their citizens out of Wuhan, the locked-down city at the centre of the outbreak.

The updated death toll followed word from officials in Hubei province, where the first illnesses from the newly identified coronavirus occurred in December, that another 25 people had died there as of end-of-day Tuesday.

The National Health Commission said 1,459 new cases have been confirmed, bringing the total to 5,974.

The growing number of cases and deaths comes as foreign governments began flying their citizens out of the affected area. A Japanese chartered flight carrying 206 evacuees landed at Tokyo's Haneda International Airport Wednesday, not long after U.S. officials confirmed a flight of evacuees took off in the early morning hours.

As news of the rise in cases broke, a team of scientists in Australia said on Wednesday they have successfully developed a lab-grown version of coronavirus, the first to be recreated outside of China, in a breakthrough that could help combat the global spread of the illness.

The researchers at the Peter Doherty Institute for Infection and Immunity in Melbourne said they would share the sample, which was grown from an infected patient, with the World Health Organization and laboratories around the world.

WATCH | Dr. Mike Catton of the Victorian Infectious Diseases Reference Laboratory and Doherty Institute explains why being able to grow the virus is a crucial development. 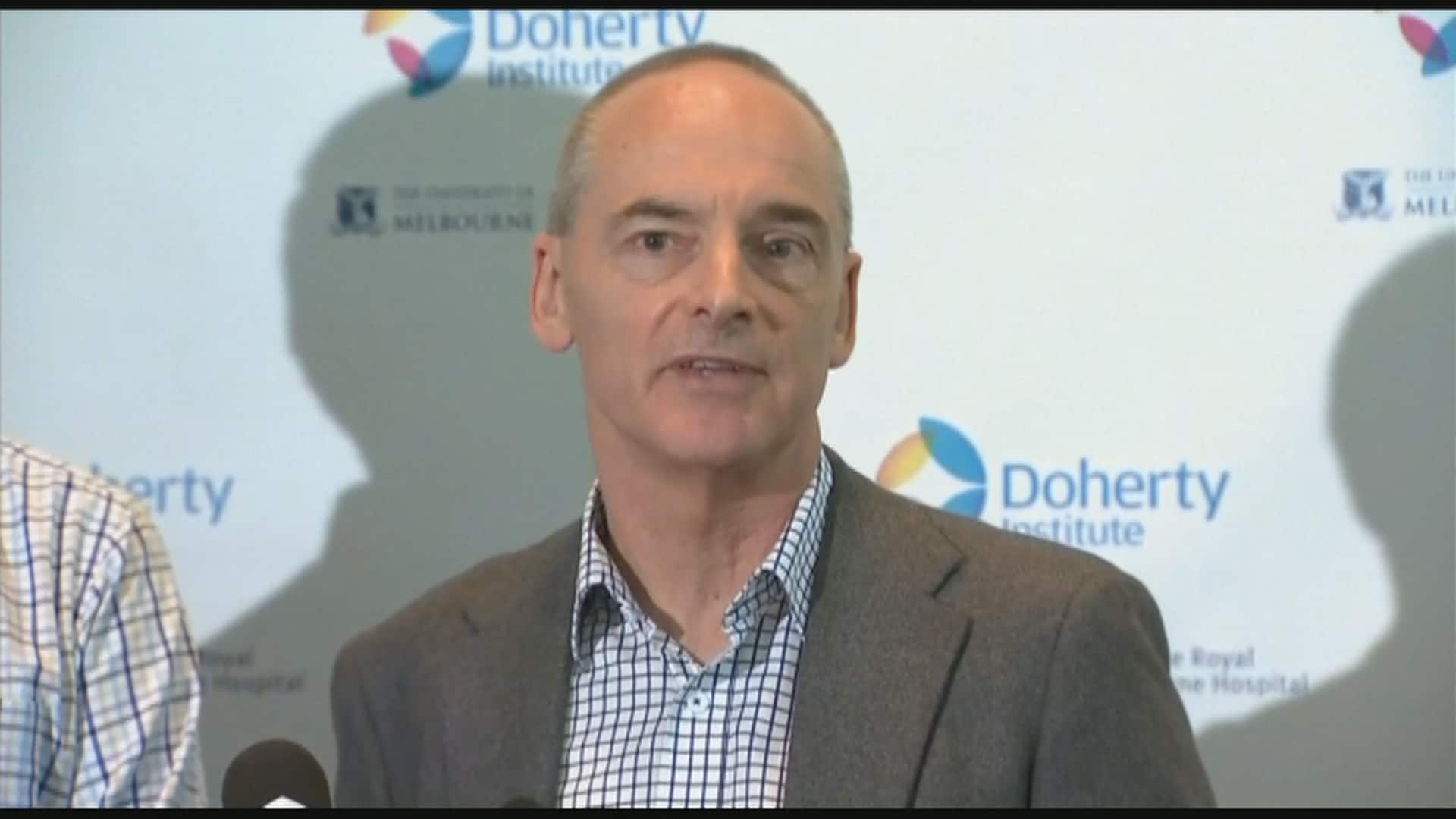 1 year ago
1:10
Dr. Mike Catton of the Victorian Infectious Diseases Reference Laboratory, explains why having a lab-grown version of the virus will be helpful in trying to slow the spread of disease. 1:10

"Having the real virus means we now have the ability to actually validate and verify all test methods, and compare their sensitivities and specificities," said Julian Druce, the head of the institute's virus identification laboratory, in a statement.

China's increasingly drastic containment efforts began with the suspension of plane, train and bus links to Wuhan, a city of 11 million people. That lockdown has expanded to 17 cities with more than 50 million people in the most far-reaching disease-control measures ever imposed.

Hong Kong's leader has announced that all rail links to mainland China will be cut starting Friday as fears grow about the spread of the coronavirus. Both the high-speed rail station and the regular train station will be closed, Hong Kong chief executive Carrie Lam said Tuesday. Ferry service will also be curtailed. 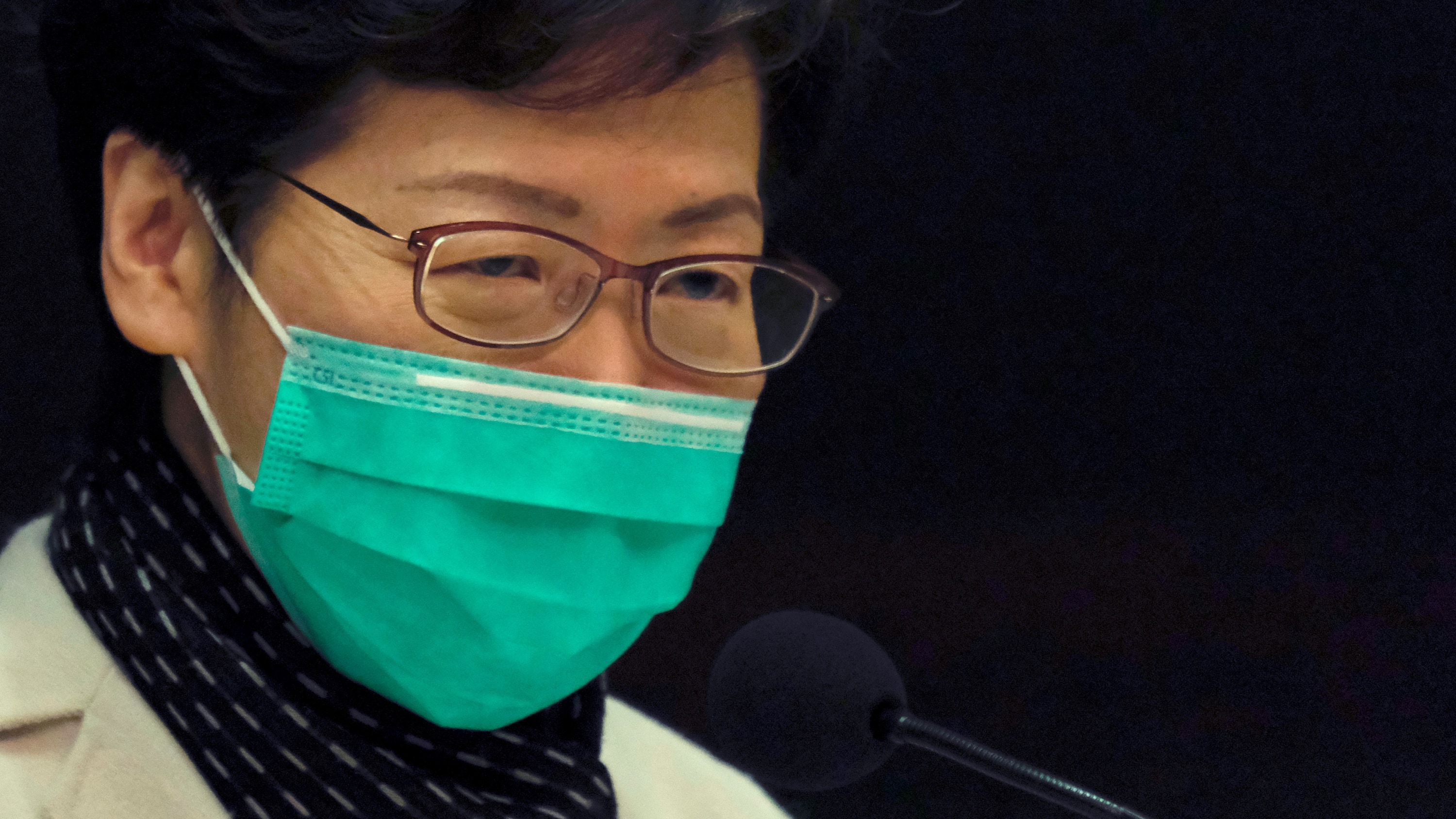 1 year ago
0:26
Chief executive Carrie Lam says the gravity of the coronavirus problem requires the flow of people into the area to be cut. 0:26

The EU is set to dispatch a second flight to get healthy European citizens from Wuhan, according to a statement by the European Commission. The disaster response was initiated at France's request.

More than 100 EU citizens will travel on the second flight.

France's government had already announced that it would organize return flights for both healthy citizens and those with virus symptoms, and that it would hold them in quarantine for 14 days after their arrival in France.

Mongolia and other governments were also planning evacuations for citizens in Wuhan.

On Tuesday afternoon, Foreign Affairs Minister Francois-Philippe Champagne said Canada is still working on its plans to get Canadians out of the affected area. He said 250 Canadians living there have registered online with Global Affairs Canada, with about 126 requesting consular assistance to get home.

China extended the Lunar New Year holiday by three days to Sunday to reduce the risk of infection by keeping offices and factories nationwide closed and the public at home. The government of Shanghai, a global business centre and home to 25 million people, extended the holiday in that city by an additional week to Feb. 9.

The government has sent 6,000 extra medical workers to Wuhan from across China, including 1,800 who were due to arrive Tuesday, a commission official, Jiao Yahui, said at a news conference.

Wuhan is building two hospitals, one with 1,500 beds and another with 1,000, for the growing number of patients. The first is scheduled to be finished next week.

WATCH | China says new coronavirus hospital in Wuhan will be ready by Feb. 3 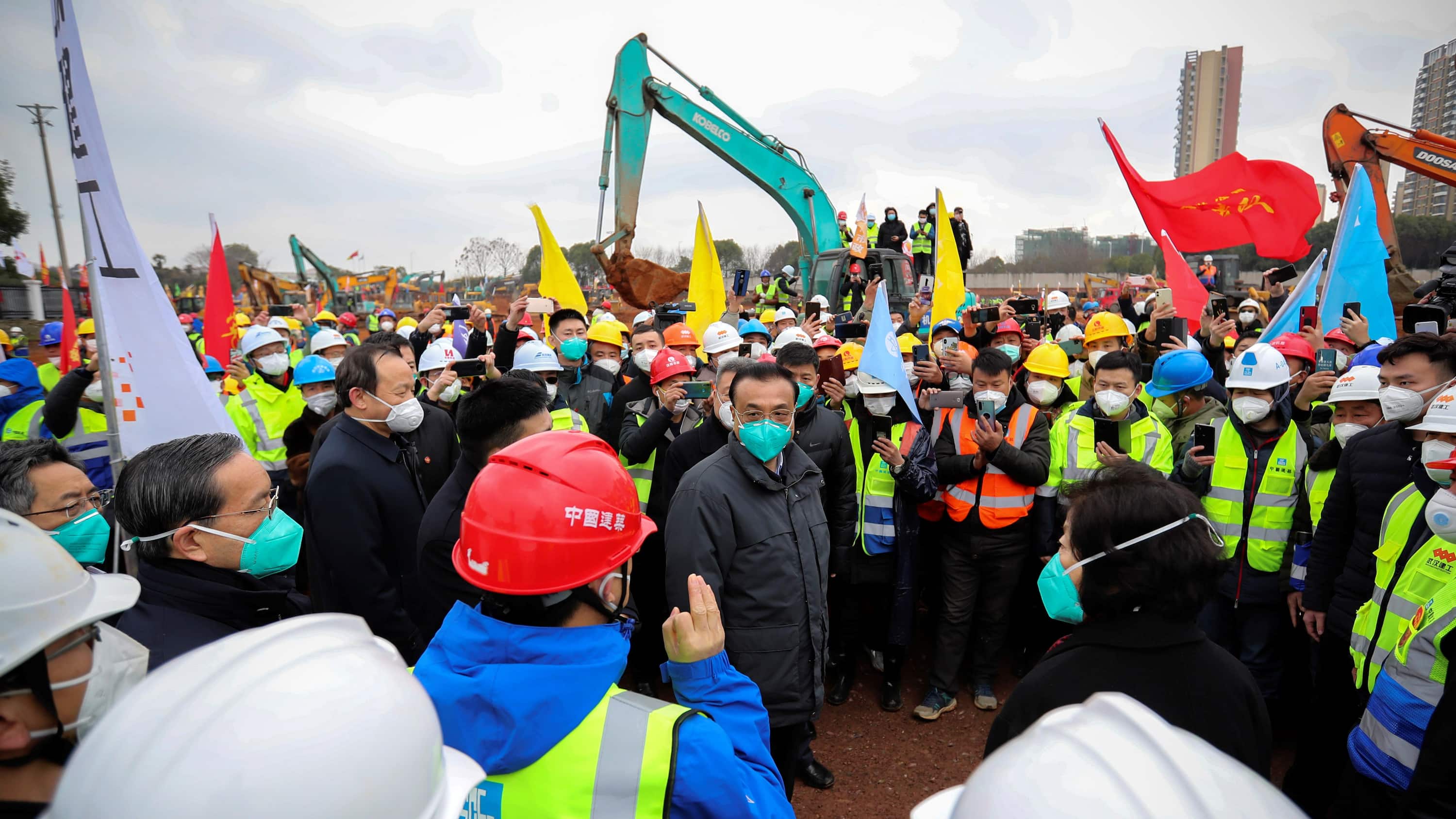 1 year ago
0:32
Contractors in China say the new hospital designed for coronavirus patients is scheduled to be ready by Feb. 3.   0:32

Global Affairs Canada has advised Canadians to avoid all travel to Hubei province, including the cities of Wuhan, Huanggang and Ezhou.

U.S. health officials expanded their recommendation for people to avoid non-essential travel to any part of China, rather than just Hubei province.

"Air Canada currently operates 33 flights a week to China, and the resulting capacity reduction is relatively small," airline spokesperson Pascale Déry told CBC News in an email. "Those customers who are affected will be notified and provided with alternate travel options. We continue to monitor the situation closely and will adjust accordingly." 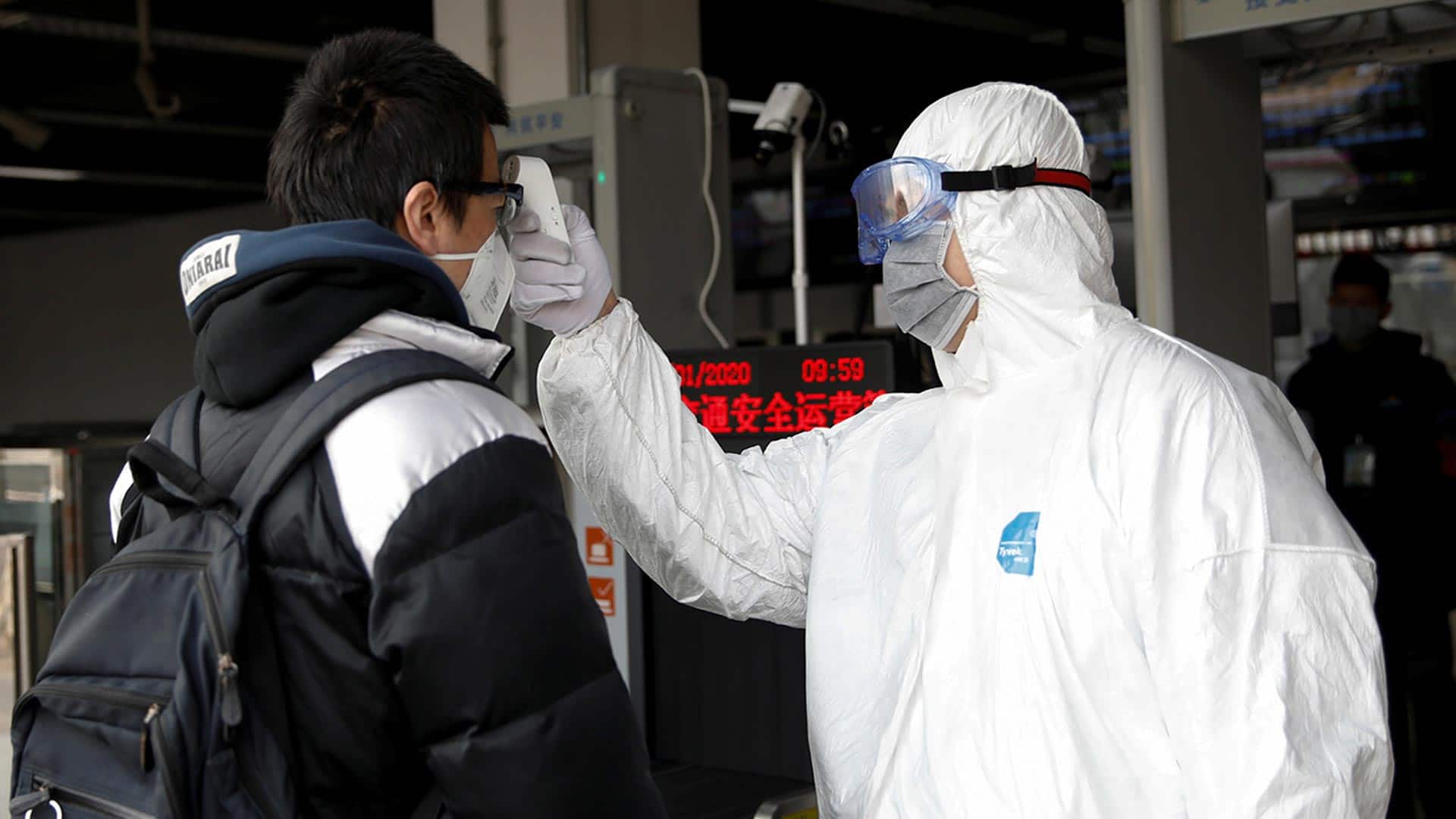 1 year ago
2:08
As the death toll from the coronavirus increases, officials are trying to stem the public outcry over what some see as mishandling of the ongoing crisis. 2:08

Also Tuesday, the Education Ministry cancelled English-proficiency and other tests for students to apply to foreign universities. The ministry said the new semester for public schools and universities following Lunar New Year was postponed until further notice.

In addition to the transportation restrictions with mainland China, Hong Kong officials announced some government offices would remain closed until at least Monday, and non-essential public employees were allowed to work from home.

Beijing's official response has "vastly improved" since the 2002-03 SARS outbreak, which also originated in China, but "fears of a global contagion are not put to bed," said Vishnu Varathan at Mizuho Bank in Singapore.

Scientists are concerned about the new virus because it is closely related to other diseases including SARS, which killed nearly 800 people.

So far, the new coronavirus doesn't seem to spread as easily among people as SARS or influenza. Most of the cases that spread between people were of family members and health workers who had contact with patients. That suggests the new virus isn't well adapted to infect people.

China has reported eight cases in Hong Kong and five in Macao, and more than 45 cases have been confirmed elsewhere in the world. Almost all involve mainland Chinese tourists or people who visited Wuhan.

Three cases of coronavirus have been reported in Canada, two in Toronto and one newly announced in British Columbia. The Toronto cases are a 50-year-old man and his wife who had travelled to Wuhan. The husband, whose case has been confirmed by Canada's National Microbiology Lab, is being treated in hospital and is in stable condition. His wife, whose case was still considered "presumptive" pending confirmation by the lab, was at home in isolation and was "asymptomatic" as of Monday, according to health officials in Toronto.

In B.C., health officials announced Tuesday they are "confident" they have the first case of the coronavirus in the province. A man in his 40s who regularly travels to China for work tested positive late Monday. He lives in the Vancouver Coastal Health region and is in isolation at home. His case is also "presumptive" pending confirmation of the test results from the National Microbiology Lab.

Five American cases — two in southern California and one each in Washington state, Chicago and Arizona — are people who had recently arrived from central China. Health officials said they had no evidence the virus was spreading in the U.S., and they believe the risk to Americans remains low.

In Germany, Vietnam, Taiwan and Japan, the virus has spread person-to-person, rather than from a traveller arriving from China, heightening concerns.

During the SARS outbreak, Chinese authorities were criticized for reacting slowly and failing to disclose information. The government has responded more aggressively to the latest outbreak. 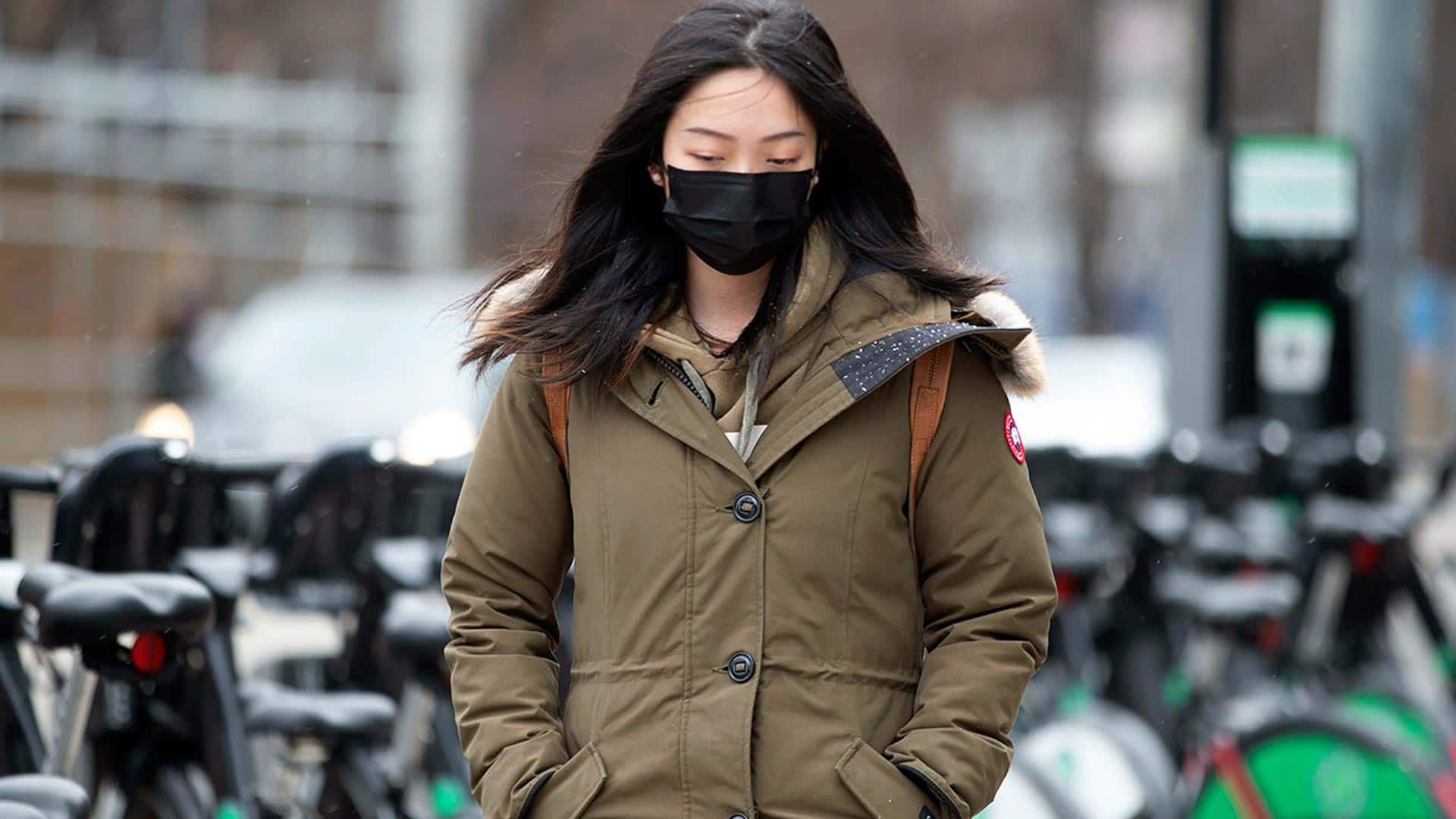 Straight answers on coronavirus in Canada

1 year ago
4:45
Infectious disease expert Dr. Allison McGeer tells The National who’s the most vulnerable and what precautions are necessary during the coronavirus outbreak. 4:45

The coronavirus family includes the common cold but also more severe illnesses, such as SARS and Middle East Respiratory Syndrome. The new virus causes cold- and flu-like symptoms, including cough and fever, and in more severe cases, shortness of breath and pneumonia.

The virus is thought to have spread to people from wild animals sold at a Wuhan market. China on Sunday banned trade in wild animals and urged people to stop eating meat from them.