Negotiators adopted a draft climate change agreement Saturday that was cluttered with brackets, highlighting areas still undecided, leaving ministers with the job of untangling key sticking points at the halfway point of the summit near Paris.

'We are not at the end of the route. Major political issues are yet to be resolved,' says French envoy 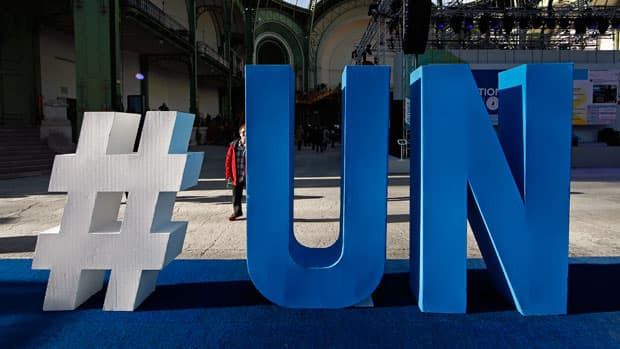 Negotiators adopted a draft climate agreement Saturday that was cluttered with brackets and competing options, leaving ministers with the job of untangling key sticking points in what is envisioned to become a lasting, universal pact to fight global warming.

As the UN talks outside Paris reached their midway point, the draft agreement was sent on to environment and foreign ministers who will work on it next week.

"We would have wished to be further along than we are at this point, but the text being forwarded so far reflects our key priorities," said Maldives delegate Thoriq Ibrahim, who chairs an alliance of small island nations on the front lines of climate change.

A host of disagreements remains, almost all related to defining the obligations and expectations of rich and poor countries, as well as those who don't fit neatly into either category.

There is still no agreement on how much the average global temperature should be able to rise. Many developing nations want it to be no more than 1.5 degrees Celsius. But developed countries say the planet can handle 2 degrees.

Canadian scientist Alain Bourque, who advises the Quebec and federal governments on climate change and specializes in the connection between science and policy, explained the significance of 2 degrees C during an interview with CBC in Le Bourget, where the summit is taking place.

"The science is stating that around 2 degrees Celsius this where you reach a threshold where the impacts of climate change are becoming more generalized, [with] higher intensity, more gravity, and also some of the impacts are becoming irreversible.

"So the science does not state clearly that it's 2 degrees or 1.9 or 1.2, but we know 3 is clearly too much change," he said. Bourque added that a rise of 1.5 degrees still poses some risk, albeit it could be more localized, so "this is where it becomes very complicated, when you try to negotiate a treaty or an agreement between 200 countries in the world."

The French climate envoy on Saturday said "major political issues are yet to be resolved. "This text marks the will of all to reach an agreement. We are not at the end of the route," Laurence Tubiana said.

Though 184 countries have already submitted national plans to reduce climate-warming greenhouse gas emissions, how to anchor those pledges in a legally binding deal remains to be worked out.

Jake Schmidt of the Natural Resource Defense Council, a New York-based environmental group, said the issue could be resolved by avoiding words like "shall" in key paragraphs about emissions targets.

"We're made some progress here, although I have to tell you the text is virtually, it's just a package of things on which people don't yet agree, and the lack of agreement is signified by square brackets," Canadian Green Party leader Elizabeth May told CBC News on Saturday. "So it's heavily bracketed text, but they have made enough progress to pass it onto the conference of of the parties themselves."

May also took a shot at the former Conservative government, saying that after Prime Minister Justin Trudeau's speech at the summit last Monday, negotiators hugged her and said "thank goodness, Canada is back," suggesting a lack of progress on Canada's part in past climate talks.

China's chief negotiator on Saturday said that any agreement adopted should be legally binding in its entirety, not just parts of it.

Su Wei told reporters that if a treaty is adopted at the end of the Paris negotiations, then "all the provisions, starting from the preamble to the final clauses would be legally binding."

After the news conference, Su indicated the issue was still up for negotiation.

"We have to further discuss ... try to find some proper solution," he said.

That contrasts with the U.S. position which is for some parts to be legally binding, but not countries' pledges to limit the greenhouse gas emissions. Binding emissions cuts would likely require the Obama administration to send the deal to the Republican-controlled Congress, where it would likely be struck down.

"We cannot just identify one sentence or one provision or article as not legally binding," Su said. "That's a general rule of international treaty laws. There's no doubt about that."

The Paris accord is meant to be a turning point in the world's efforts to fight climate change. Since they started in 1992, the UN talks have not been able to stop the rise in emissions, mostly from the burning of fossil fuels, blamed for warming the planet.

Previous agreements only required rich countries to reduce their emissions. The new agreement would apply to all countries, but many developing nations are resisting language that would indicate a shift in responsibilities.

The U.S. and other developed countries have traditionally been the only ones expected to provide financing to help poor countries deal with rising seas and other impacts of climate change. They want the new agreement to expand the donor base to include the most advanced developing countries.

Major developing countries including India and China are pushing back, amid worries that wealthy countries are trying to dodge their responsibilities.

The developing bloc says the parts of world that industrialized first — the U.S., Canada, Europe, Japan, Australia and New Zealand — have a historical responsibility to address climate change.