As wildfires grow, so too does anger at Australia PM's handling of crisis

Cooling temperatures and calmer winds brought some relief Sunday to Australian communities raked by wildfires, but the heat stayed on Prime Minister Scott Morrison to accept responsibility for the crisis and take action.

Cooling temperatures and calmer winds brought some relief Sunday to Australian communities raked by wildfires, but the heat stayed on Prime Minister Scott Morrison to accept responsibility for the crisis and take action.

"There has been a lot of blame being thrown around," Morrison said at a news conference. "And now is the time to focus on the response that is being made. ... Blame doesn't help anybody at this time and over-analysis of these things is not a productive exercise."

But the moves did little to tamp down the criticism that he had been slow to act, even as he has downplayed the need for his government to address climate change, which experts say played a key role in supercharging the blazes.

As dawn broke over a blackened landscape Sunday, a picture emerged of disaster of unprecedented scale. The New South Wales Rural Fire Service (RFS) said 150 fires were active in the state, 64 of them uncontrolled.

"I have been in the Rural Fire Service for 20 years," RFS Inspector Ben Shepherd told CBC News. "I have never seen it to this magnitude."

The wildfires have so far scorched an area 60,000 sq. km stretching across Australia's southeast quadrant, bigger than the area of Nova Scotia and Prince Edward Island together. The fires have killed at least 24 people, including a 47-year-old man who died Saturday night while trying to defend a friend's home from encroaching flames. Nearly 2,000 homes have been destroyed.

"So some people might think their house is safe and then a day later it may not be."

Our strike teams have been busy this weekend helping our NSW colleagues. This is the view from the cabin of one of our trucks at Wandandian on the NSW south coast. <a href="https://twitter.com/hashtag/nswfires?src=hash&amp;ref_src=twsrc%5Etfw">#nswfires</a> <a href="https://t.co/xpMkfOIKfC">pic.twitter.com/xpMkfOIKfC</a>

Australians know to expect summer wildfires. But the blazes arrived early this year, fed by drought and the country's hottest and driest year on record.

"It's not something we have experienced before," New South Wales Premier Gladys Berejiklian said.

"The weather activity we're seeing, the extent and spread of the fires, the speed at which they're [moving], the way they are attacking communities that have never seen fire is unprecedented," she said.

Scientists say there's no doubt man-made global warming has played a major role in feeding the fires, contributing to factors like very dry brush and trees and strong winds.

Morrison, chided for past remarks minimizing the need to address climate change, has deflected criticism while trying to change his tone.

"There is no dispute in this country about the issue of climate change globally and its effect on global weather patterns, and that includes how it impacts in Australia," the prime minister said. 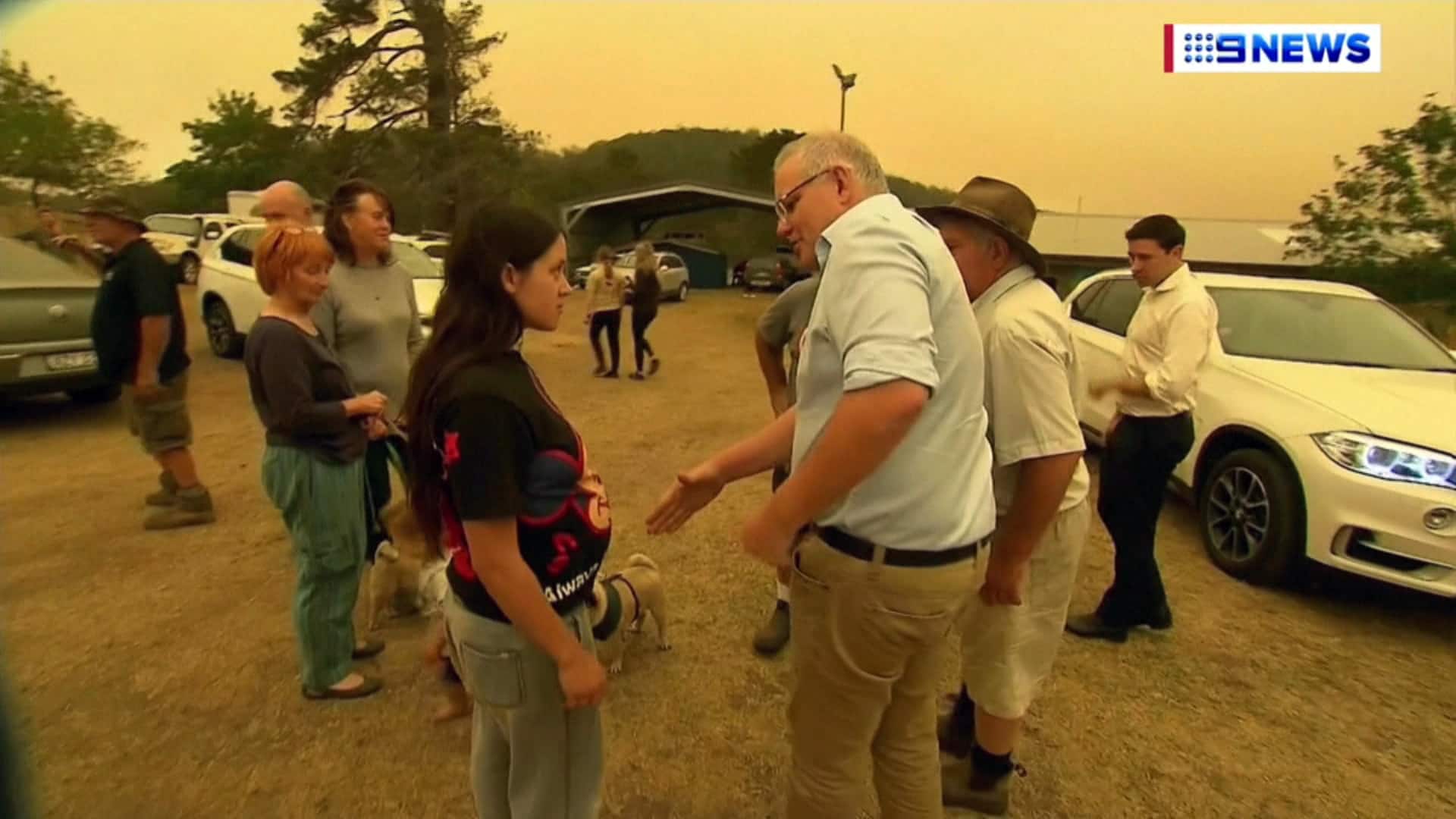 10 months ago
0:16
Angry residents give Australia Prime Minister Scott Morrison a harsh reception over his handling of wildfires crisis. 0:16

Morrison has faced widespread criticism for taking a family vacation in Hawaii at the start of the wildfire crisis, as well as for his sometimes distracted approach as the disaster has escalated and his slowness in deploying resources.

His handling of the deployment of reservists also came in for criticism Sunday. Rural Fire Service Commissioner Shane Fitzsimmons, who is leading the fight in New South Wales, said he learned of the deployment through media reports.

"It is fair to say it was disappointing and some surprise to hear about these things through public announcements in the middle of what was one of our worst days this season, with the second-highest number of concurrent emergency warning fires ever in the history of New South Wales," he said.

Morrison was also forced to defend a video posted on social media Saturday that promoted the deployment of reservists and the government's response to the wildfires.

On Sunday, cooler temperatures and lighter winds brought some relief to threatened communities, a day after thousands were forced to flee as flames reached the suburban fringes of Sydney.

Thousands of firefighters fought to contain the blazes, but many fires continued to burn out of control, threatening to wipe out rural townships and causing almost incalculable damage to property and wildlife.

On Saturday, a father and son who were battling flames for two days died on a highway on Kangaroo Island, off South Australia state. Authorities identified them as Dick Lang, a 78-year-old acclaimed bush pilot and outback safari operator, and his 43-year-old son, Clayton. Their family said their losses left them "heartbroken and reeling from this double tragedy."

Lang, known as "Desert Dick," led tours for travellers throughout Australia and other countries.

In a statement issued Sunday, Canadian Foreign Minister François-Philippe Champagne says Canada is deeply saddened by the deaths, and that the country has sent almost 100 firefighters to help fight the blazes in Australia — with more on the way soon.

"We are prepared to consider further assistance as necessary," said Champagne.

"When wildfires spread through Canadian communities, Australia answered our call for help. We are proud to do the same."

Edmonton's Morgan Kehr of the Canadian Interagency Forest Fire Centre is one of those helping in Australia.

"We have seen extreme fire behaviour in Canada, but not over the geographic area we are dealing with [here in Austrialia]," he told CBC News.

"We will get one, two, three, four, five days of it. Here it has been four months of it."

Meanwhile, Australia's capital, Canberra, was enveloped in a smoky haze Sunday and air quality at midday was measured at 10 times the usual hazardous limit.

In New Zealand, the skies above Auckland were tinged orange by smoke from the bushfires and police were inundated with calls from anxious residents.

With files from CBC's David Common