In the #MeToo era, women used as sex slaves by Japanese in WW II are still seen as prostitutes, not victims

The Japanese government admits the girls and young women in its military-run brothels during the Second World War suffered badly. But what it won't admit, despite plenty of evidence, including the words of survivors, is that the so-called comfort women were sex slaves who were taken against their will.

Japanese government admits girls and women suffered, but denies evidence they were taken against their will

Lee Ok-sun was 15 years old in 1942, when two Japanese men in civilian clothes abducted her while she was out running errands in the port city of Busan, in what is now South Korea.

She was eventually taken to an airfield in Japanese-occupied China, she says, where she was forced to spend her remaining teenage years as a sex slave for the military.

Lee says she was whipped and threatened at gunpoint.

"I somehow survived and am still surviving," the 92-year-old says.

Lee was one of the tens of thousands of teenagers and young women who were shipped to brothels run by the Imperial Japanese Army during the Second World War. The military called them "comfort women." Most were from Korea and China, but some were also from the Philippines and other countries in Southeast Asia.

"We were not comfort women; we were forced into sexual slavery," Lee said in a recent interview with CBC News.

After the war, Lee stayed in China for three decades before returning to South Korea. By this point, her parents had died, and she herself was listed as deceased because in 1942 she had simply vanished.

She was told of a communal retirement home for former comfort women on the outskirts of Seoul called the House of Sharing, and, feeling ostracized and alone, moved in. She still lives there today.

More than seven decades after the hellish experience, Lee and the fewer than 30 remaining survivors who live in the House of Sharing are still waiting for a proper apology from the Japanese government, she says.

In this #MeToo era, where women's accounts of sexual assault and harassment are being listened to more than ever before, Lee says she's still fighting to be believed.

"The Japanese government says we are lying, and it makes me sad and angry and furious."

A former comfort woman describes her isolation after her time as a war-time sex slave: 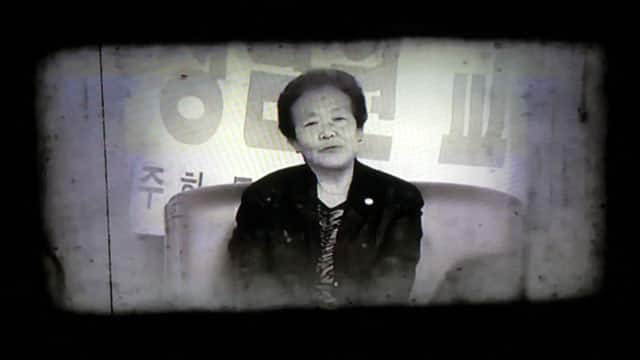 2 years ago
0:43
A former comfort woman who was used as a sex slave by Japanese soldiers during the Second World War describes her experience. (House of Sharing) 0:43

Despite having issued repeated apologies over the years, the Japanese government's position in 2018 is that there's no evidence the comfort women were taken against their will.

Prime Minister Shinzo Abe said as much during his first term in 2007, and the view has since become the official position of the government, which lobbies against international efforts to recognize what happened to the comfort women.

During a briefing in June, an official with Japan's Ministry of Foreign Affairs said the government has apologized repeatedly for what happened, but that it could not confirm that women were "forcefully taken away."

The official said the comfort women system was indeed "regulated" by the military, but if a soldier had forcefully taken a woman, "they would have been punished."

That represents a significant shift from Japan's first apology, in 1993, which consisted of a statement that acknowledged comfort women were recruited against their will and that the military was directly involved.

The government apologized for the "immeasurable pain and incurable physical and psychological wounds" the comfort women suffered.

Conservative politicians in Japan slammed the statement for years, insisting it includes fabrications, particularly that the women were forced to become sex slaves.

Japanese media reports from 2014 quote a Japanese lawmaker telling parliament, "I heard from a former Japanese soldier that the comfort women thanked the military because they were able to send money back home."

Call for removal of commemorative statues

Others on the right have said the comfort women were professional prostitutes.

In 2015, Japan and South Korea reached an agreement on the comfort women issue. Japan apologized again and set up a victims' fund of about $9 million.

The agreement acknowledged the involvement of Japanese military officials and apologized to "all the women who underwent immeasurable and painful experiences and suffered incurable physical and psychological wounds as comfort women."

It did not mention the term "sex slaves," nor did it address the issue of whether girls and women were taken against their will. The deal explicitly states it is meant to solve the issue "finally and irreversibly."

Survivors were disappointed because they were not consulted in the negotiations. They also wanted Japan to accept legal responsibility and pay formal reparations.

Mina Watanabe, director of Tokyo's Women's Active Museum on War and Peace, says Japan's apologies don't really mean anything because the government has ignored the testimony of victims and denied facts.

"I would say we don't know for what acts the Japanese government apologized anymore."

She also points out the government has fought against activist efforts to support and recognize the women.

The government has called for the removal of statues commemorating the women in South Korea, the Philippines and the U.S. It has also threatened to withhold UNESCO funding to prevent comfort women documents from being added to the Memory of the World's Register, a global project to preserve historical records.

Watanabe says the Japanese government's goal is to rewrite history. It wants people to believe there was no forced recruitment of girls and young women into sexual slavery, and that they were all volunteers, she says.

She says the legacy of Japan's treatment of comfort women influences its treatment of women today. It helps explain, for example, why the #TimesUp and #MeToo movements have gained little traction in Japan.

She says a pair of journalists who came forward with high-profile assault and harassment allegations faced an onslaught of online abuse for going public.

"In a deeply patriarchal society, it's hard to change attitudes, and the sense of male privilege is especially strong amongst the elite."

Kingston calls Prime Minister Abe a historical revisionist, and says there are mountains of evidence to support claims of former sex slaves.

"Clearly there was coercion. If you talk to any of the former comfort women, they have heart-rending stories of how they were inducted into this system."

He says Japan's "re-imposition of collective amnesia" only heightens the pain of Koreans, and is part of the government's effort to make what it considers an "annoying issue" just go away.

Before he began his new post in Washington this spring, Japan's ambassador to the U.S., Shinsuke Sugiyama, told reporters one of his priorities was to push Japan's opposition to "comfort women commemoration statues in the U.S. and other countries."

The statues are a hot-button issue for the Japanese government. Last year, Tokyo temporarily recalled its ambassador to South Korea when a new monument was erected in Busan.

Another statue is found in St. Mary's Square in San Francisco's Chinatown. It shows three young girls holding hands on a pedestal. The girls are meant to represent those who were taken from Korea, China and the Philippines. Beside them stands a likeness of Korean activist Kim Hak-Sun, the first survivor to speak out about her experiences.

Coalition president Judith Mirkinson says the statue is not going anywhere, regardless of what the Japanese government wants.

"This is not just a nationalist issue; this is a women's issue ... an issue of violence against women," she said.

But that could take time, which is a concern for Lee Ok-sun and her fellow survivors, who are all in their 80s or 90s.

Ahn Shin-kwon, the director of the House of Sharing, which also acts as a museum and archive of survivors' stories, says it's crucial for his residents to know they're believed.

"What they fear the most is they are alive and are telling the truth, but the Japanese government is still denying and still saying they are lying," he said.

"Even with them alive, they are doing that. If they just die, then they are going to be labelled as prostitutes forever."