Stranded tourists and residents struggle to clear roads and cope with power cuts caused by a powerful earthquake that killed at least 19 people and injured 247. 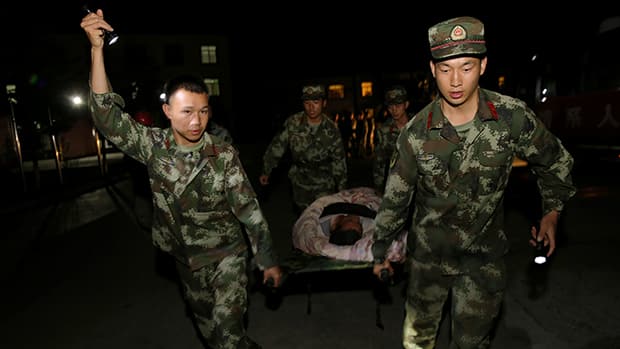 3 years agoVideo
1:13
The magnitude 6.5 quake hit a mountainous region in Sichuan province Tuesday night. The area, known for its waterfalls, is among China’s most popular tourist attractions. At least 19 people are dead 1:13

Stranded tourists and residents struggled Wednesday to clear roads and cope with power cuts caused by a powerful earthquake that killed at least 19 people and injured 247.

The magnitude 6.5 quake struck a mountainous region near a national park that is one of the country's top tourist attractions. Rescuers dug through rubble with their hands and used detectors to search for signs of life. The Tuesday night quake knocked out power and phone networks, complicating efforts to locate and evacuate survivors.

Most of the deaths and injuries were recorded in Zhangzha township, near to Jiuzhaigou or Jiuzhai Valley, a national park known for spectacular waterfalls and karst formations that attracts visitors from China and overseas.

People were rushing out, some people were screaming.— Hostel owner Yang Jie

Yang Jie, who owns a hostel in Zhangzha, said she was at a hotpot restaurant with friends when the lights went out and everything started shaking at around 9:20 p.m. Tuesday.

"People were rushing out, some people were screaming," Yang said by phone. "On our way home, there were rocks falling down from the hills on both sides of the road. We couldn't get through on the phone because there was no signal."

Yang and her friends returned to find large cracks in her hostel and set up tents outside for guests to sleep in.

On Wednesday, she said the building was still without power, stores were closed and "houses around us are [damaged] beyond recognition."

"The whole night, even right now, there has been no one from the government dropping by to tell us what's going on or what to do," Yang said. "There were more than 30 guests at my hostel, I have to start fires to keep them warm. ... We cleared the path and moved rocks away this morning so that my guests could leave by car."

President Xi Jinping called for rapid efforts to respond to the disaster, which struck a quake-prone region bordered by Sichuan and Gansu provinces. The area is on the edge of the Tibetan Plateau and home to many Tibetan and other ethnic minority villages.

Among the injured, 40 were listed in serious condition, according to the Aba Tibetan and Qiang Autonomous Prefecture government in Sichuan. At least five of the dead were tourists, China's official Xinhua News Agency said. Hong Kong's immigration department said one of the city's residents was missing in the quake.

A Canadian woman suffered a slight head injury and a French citizen was wounded in both legs and needed surgery to remove stone fragments, according to Xinhua. It said Frenchman Maxence Vallon, 18, was staying with his mother and brother at a hotel in Jiuzhaigou.

They were seeking shelter outside "when a big stone fell and hit my brother right in the leg," said Romain Vallon, who studies in Beijing.

The dead included a performer in an arts group who was buried in the quake and found Wednesday morning. She and others had been performing in Jiuzhaigou when the quake struck. According to the Legal Evening News, they were acting out a scene about a deadly 2008 earthquake that struck nearby and killed nearly 90,000 people. When Tuesday's quake hit, the performers ran off the stage in terror and the audience thought the tremor was part of the show.

In footage shown on state broadcaster China Central Television, rescuers picked away rubble from around a body, then stood silently in a row, with helmets off and heads bowed to pay their respects.

Other orange-suited rescuers were shown using detectors to search for survivors in the dark of night, carrying a girl to safety and leading other people along a rubble-strewn road.

The U.S. Geological Survey measured the quake at magnitude 6.5 and said it struck at a depth of just nine kilometres. Shallow earthquakes tend to cause more damage than deeper ones.

On Wednesday morning, another strong earthquake struck far northwestern China, some 2,200 kilometres from Jiuzhaigou, injuring 32 people, two of them seriously, and damaging more than 1,000 houses, Xinhua reported. That quake was measured at 6.3 by the USGS and struck in a sparsely populated area of the Xinjiang region near the Kazakhstan border.