The French satirical magazine Charlie Hebdo has republished cartoons of the Prophet Mohammed that made the outlet the target of a deadly terror attack in 2015. The announcement comes on the eve of the first trial.

Caricatures of the Prophet Muhammad made the satirical magazine the target of a deadly terror attack in 2015.

The French satirical paper, Charlie Hebdo, whose offices in Paris were attacked by Islamic extremists in 2015 is reprinting caricatures of the Prophet Muhammad cited by the killers, saying "history cannot be rewritten nor erased."

The announcement on Tuesday came on the eve of the first trial for the January 2015 attacks against Charlie Hebdo and, two days later, a kosher supermarket.

Seventeen people died in the attacks — 12 of them at the editorial offices — along with all three attackers.

Thirteen men and a woman accused of providing the attackers with weapons and logistics go on trial Wednesday.

In an editorial accompanying the caricatures, the paper best known for vulgar irreverence said that although it had declined to publish caricatures of Muhammad since the attacks, doing so for the opening of the trial was necessary.

"The only reasons not to stem from political or journalistic cowardice," the editorial said.

The attackers, French-born brothers Cherif and Said Kouachi, claimed the attacks in the name of al-Qaeda. As they left the scene at Charlie Hebdo, they killed a wounded police officer and drove away.

Two days later, an acquaintance of theirs stormed a kosher supermarket on the eve of the Jewish Sabbath, killing four hostages and claiming allegiance to the Islamic State group (ISIS). The supermarket attacker, Amedy Coulibaly, also killed a young female police officer. 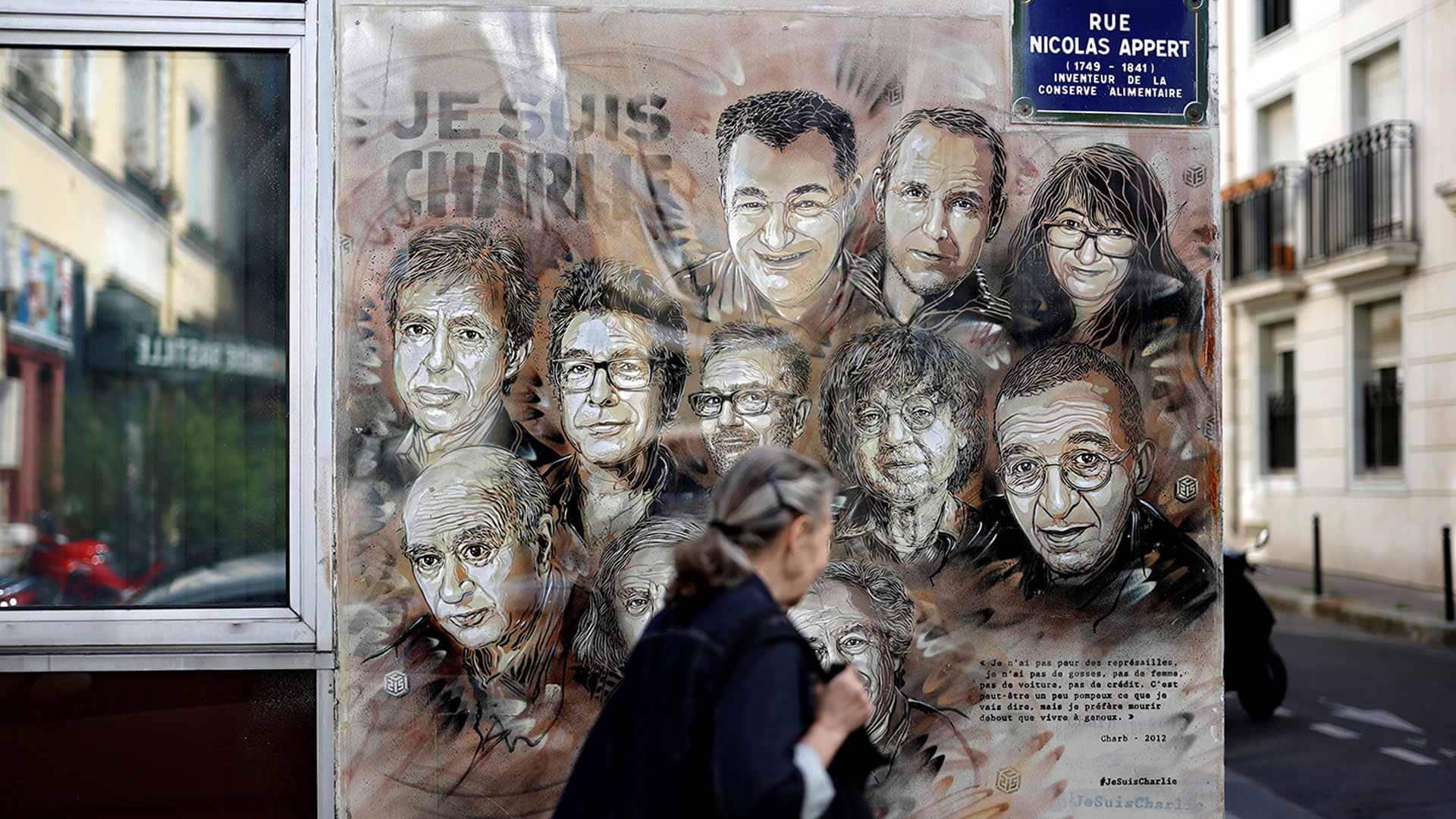 6 months ago
2:07
A trial has started for 14 people accused of helping gunmen carry out the 2015 attacks in Paris on the Charlie Hebdo newspaper and a Kosher grocery store, which victims and their families hope will give answers about why the attacks happened. 2:07

The caricatures re-published this week were first printed in 2006 by the Danish newspaper Jyllands Posten, setting off sometimes violent protests by Muslims who believe depicting Muhammad is blasphemy. Charlie Hebdo, which was then little-known outside France and regularly caricatures religious leaders from various faiths, republished them soon afterwards.

The paper's Paris offices were firebombed in 2011 and its editorial leadership placed under police protection, which remains in place to this day.

French President Emmanuel Macron said on Tuesday it was not his place to pass judgment on the decision by the satirical magazine, saying France has freedom of expression.

Laurent Sourisseau, the paper's director and one of the few staff to have survived the attack, named each of the victims in a foreword to this week's edition.

"Rare are those who, five years later, dare oppose the demands that are still so pressing from religions in general, and some in particular," wrote Sourisseau.

Three of the accused, including the wife of one of the attackers, will not be at the trial because they are abroad and it's not known if they're alive or dead.

Most of the 11 who will appear in court say they knew it was for a crime but claim they had no idea it was for mass killings.

Among those inside the market was Lassana Bathily, an employee who hid a group of the store's Jewish customers in a cold room and slipped out to warn police about the terror attack inside. Eleven days later, he was granted French citizenship. He is among nearly 200 plaintiffs at the trial.

The world rallied behind France in the days after the killings. Leaders from around the world joined millions of people who poured into Paris's enormous Republique plaza and other gathering spots in France bearing defiant signs that read "I am still Charlie."

The trial will be filmed for posterity, a rarity in France reserved for proceedings of historical import.