Barcelona metro stations were closed, pickets blocked roads and state workers walked out on Tuesday in protests across Catalonia over a Spanish police crackdown on a banned independence referendum. In a national TV address, Spain's king criticized pro-independence efforts.

Tens of thousands of people took to the streets of Catalonia on Tuesday to protest against Sunday's violent crackdown by Spanish police on an outlawed independence referendum for the region.

Spain's King Felipe VI responded by saying that Catalan authorities have deliberately bent the law with "irresponsible conduct" and that the Spanish state needs to ensure constitutional order and the rule of law in Catalonia.

Delivering an address to the nation by television Tuesday night, the king said that the bid by authorities in the northeastern region to push ahead with independence has "undermined coexistence" in Catalonia.

"Today, Catalan society is fractured and confronted," Felipe said, referring to the political crisis as "very serious moments for our democratic life."

He said that the state needs to ensure Spain's constitutional order and the correct functioning of Catalan institutions and rule of law.

Spain's conservative government has said it will respond with "all necessary measures" to counter the Catalan defiance, and is holding talks with national opposition leaders to find multi-partisan consensus on the response, which could include suspending the region's self-government.

Meanwhile, in Barcelona's Catalonia and University squares, a sea of demonstrators waved flags, most of them "esteladas," embraced by those seeking secession, but there were also plenty of Spanish national flags.

One of the biggest groups concentrated around the Spanish national police headquarters in Barcelona, where protesters called them "occupying forces" and called for Prime Minister Mariano Rajoy to resign.

Metro stations shut down in Barcelona, pickets blocked dozens of roads and state workers walked out in response to a call for a general strike by pro-independence groups and trade unions. Many small businesses also shut down for the day.

Many non-separatists were also drawn to the streets following a crackdown on a referendum vote on Sunday.

Pro-independence parties who control the regional government staged Sunday's referendum in defiance of Spanish courts that had ruled it illegal. Some 900 people were injured on polling day when police fired rubber bullets and charged at crowds with truncheons to disrupt the vote.

Results showed voters overwhelmingly backed independence in the ballot, which opponents of secession mostly boycotted. The referendum has plunged Spain into its worst constitutional crisis in decades.

Catalonia is a centre of industry and tourism accounting for a fifth of Spain's economy. Although it has extensive autonomy, its tax revenues are crucial to Spain's state budget.

Catalan leader Carles Puigdemont has said the vote was valid, raising the prospect that the Catalan parliament could unilaterally declare independence from Spain within days. 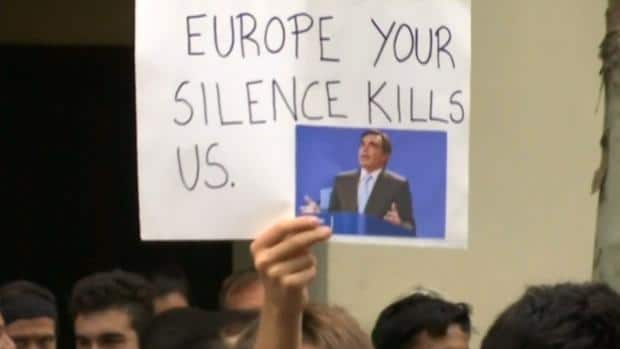 Catalonia, Spain's wealthiest region, wedged in the northeast on the Mediterranean coast below the mountainous border with France, has its own language and culture, and a growing minority there has nurtured hopes of independence for years. Madrid says the constitution prohibits secession and can only be changed if all Spaniards, not just Catalans, agree.

A big crowd gathered outside the local headquarters of Spain's ruling Popular Party. Catalan firefighters in their orange jackets and yellow helmets, who have assumed a role as mediators between demonstrators and police, stood between the crowd and police.

"In no way can we accept that they come here with this kind of repression," taxi driver Alejandro Torralbo, 64, said of Sunday's police action.

"They can't do this. What happened on Oct. 1 has fired up independence feeling that will never die," said another demonstrator, 18-year-old student Monica Ventinc.

'Don't let yourselves get carried away'

Normally busy metro stations in Barcelona were deserted as services were cut back sharply, pickets blocked traffic on Gran Via street and traffic on six major highways in the region was disrupted by protests.

Protesters used a large truck to block a highway in El Masnou near Barcelona, painted "general strike" on a road sign and put up a banner reading "Not one step back."

"Today is a day of democratic, civic and dignified protest. Don't let yourselves be carried away by provocations. The world has seen that we are peaceful people," Puigdemont said on Twitter on Tuesday.

Elsewhere in Barcelona, the response to the strike call was patchy with some shops, supermarkets and cafes open and some closed. The Boqueria market in the city was almost empty.

With 95 per cent of the vote counted, authorities said the Yes vote stood at 90.1 per cent, on a turnout of 2.26 million of 5.34 million registered voters.

Scenes of armoured Spanish police swinging truncheons and firing rubber bullets at peaceful voters have been widely condemned, with the European Union calling for talks to break the stalemate between Madrid and Barcelona.

On Sunday, Rajoy said the ballot had failed, while Puigdemont vowed to continue with the independence process.

Puigdemont has called for international mediation in the region's dispute with Madrid.

Spanish stocks remained under pressure and the cost of insuring exposure to Spanish sovereign debt rose to a near five-month high, with many economists and investors anticipating an escalation of tensions in the short term.

Spain's two largest unions, the UGT and CCOO, said on Monday their affiliates in Catalonia would not take part in the general strike, but would support protests.

Spanish Deputy Prime Minister Soraya Saenz de Santamaria said police had told her they had been forced to leave one Catalan town after the local council threatened to exclude them from the hotels where they were staying.

"We aren't going to tolerate mafia-like behaviour from the town councils of Catalonia," she said.

She said Puigdemont and his regional government had lost respect for the democratic process and were showing a flagrant disregard for the law.

"I've seen how President Puigdemont has flooded the streets with his followers to stop people obeying the law and to make them disrespect justice," she said. "We are here to defend the rights and liberties of all Spaniards that have been trampled upon by the regional government."

Many services under the control of the Catalan government saw some stoppages, with public transport running at around 40 per cent, according to reports, while port workers and civil servants also walked out. Entrances to some government offices were blocked by crowds protesting in favour of independence.

In the small Catalan town of Vic, a bastion of independence, every shop, bar and cafe was closed in the town of 40,000 people and stalls were draped with Catalan flags, which also hung from most balconies.

A giant Yes banner hung in the main square, where people were congregating. A neon sign above a closed bar on the square flashed "Hello New Country, Hello New Republic, Hello Europe."