On the front lines in Mosul, Canadian medical charity treating the wounded

During a recent lull in the fighting in the bloody battle for Mosul, a group of medics made sure a group of desperate residents who had just fled the city had enough food and water, handing out care packages to needy families.

The members of this Canadian medical charity minister work behind the scenes, but are usually on the front lines treating wounded soldiers and civilians.

"It's difficult for some of the bigger organizations to get close to the fighting," said Dixon Leroux, a paramedic from Vancouver. "But it's really important for the people that are injured to get care right away. And that's what we do."

"We're really good at keeping people alive if we get to them soon enough."

Leroux is a member of the Multinational Emergency Response Medical Team (MERMT), an aid group with 10 members founded in Vancouver last summer. The military operation to retake control of Mosul is the organization's first mission.

The medics arrived in northern Iraq in January, just before Iraqi security forces launched their operation to defeat ISIS in western Mosul. The eastern side of city was liberated earlier in January.

Mosul's largest medical facility, al-Salam hospital, was destroyed by the jihadists. The city's capacity to treat wounded civilians has been greatly stretched. The doctors and paramedics of MERMT work out of field hospitals out in the open.

"As the battle for Mosul unfolds, we are finding that ISIS is regularly occupying medical facilities and placing civilians and staff there at risk of incoming attacks," said Lama Fakih, the regional director for the Middle East at Human Rights Watch.

Iraq's army has a medical corps, but given the fierce fighting since the Mosul operation began last October, army doctors and nurses are at times overwhelmed.

ISIS uses car suicide bombers, snipers and home-made bombs to attack both civilians and members of the security forces. Civilians have been killed and injured by airstrikes launched by the international coalition fighting the militants.

Hundreds of soldiers and civilians are believed to have died since the battle began, but exact numbers are difficult to find, as Iraqi officials do not reveal battle losses.

Leroux saids MERMT medics were treating as many as 100 soldiers and civilians a day at the beginning of the second phase of the Mosul operation.

"We see a lot of chest injuries here. Gunshot wounds or shrapnel to the chest," said Leroux, 24. "A lot of these soldiers don't wear armour."

'A certain kind of evil'

The medical teams have also offered care to children.

"The other week we had a sniper who was literally hunting young girls in the city," said Max Leopold, MERMT's chief medic. "That's a certain kind of evil to sit somewhere in a building and wait for young girls to go by and shoot them."

Leopold, who's German but lives in Vancouver, said his organization has fewer restrictions on where its medics can go to offer care, compared to larger international aid agencies.

"I think the big NGOs are too frightened to come to the front lines," said Capt. Osama Fouad of the Iraqi Medical Corps. "I don't blame them. It's a matter of security."

"What these guys are is really tough," said Capt. Fouad, referring to the MERMT medics. "They've been with us in the front lines and they're doing an amazing job."

They're not the only Canadians helping to heal.

Forty-nine members of a Canadian Forces medical unit operate a small hospital in Erbil, about 85 kilometres to the east of Mosul.

The doctors and nurses at the facility treat soldiers from the international coalition fighting ISIS in Iraq. They have also offered care to a handful of Iraqi soldiers.

Military personnel from most of the nations in the coalition, including Canada, advise and train local forces. They are not at the front lines fighting ISIS.

As a result, the Canadian Forces hospital is usually not busy.

"Because of the mission we're happy to say that we have not had a high amount of coalition casualties," said Lt. Col. Richard Morin, the commanding officer of the hospital. "In terms of battle casualty, it's been a little over a month since we've had a battle casualty come through."

Since the Canadian Forces established the facility last November, the staff have treated fewer than 20 serious casualties. They also offer emergency care for soldiers and civilians who may fall and break a bone while on base, for example.

It's believed that about 200 Canadian Special Forces members are in northern Iraq, training Kurdish Peshmerga and Iraqi soldiers. None of the Canadian soldiers have been treated in the hospitals, according to Lt. Col. Morin.

While the military views an empty operating room as a success, Dixon Leroux and his fellow medics hardly have any downtime.

Leroux said it took him a few days to get used to the battle unfolding around him. "At first I was definitely scared of the fighting and I'm not totally used to seeing firearms all over the place."

But he quickly adapted.

"I definitely think that our care has saved peoples' lives," he said. "Our statement is: if we save one person's life that otherwise would have died, then we go home with a win." 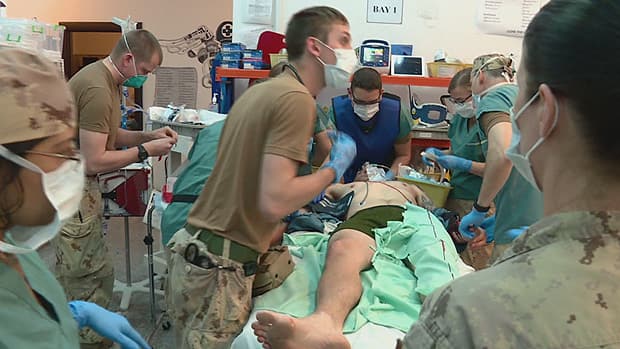 4 years agoVideo
2:44
As Iraqi troops push to break the deadly grip of ISIS in the city of Mosul, Canadian medics are tending to civilians caught in the crossfire. 2:44