Azerbaijan and Armenia are again fighting over disputed territory in the Caucasus Mountains — but this time the conflict could grow into a regional war and lead to a humanitarian crisis.

With Armenia and Azerbaijan now pounding each other's tanks and troops from the ground and the air, a regional conflict over an old battleground in the South Caucasus Mountains is threatening to spiral into something larger and much harder to control.

Canada is warning against escalation, while one expert warns that the conflict could turn into a humanitarian catastrophe if it persists.

The enclave of Nagorno-Karabakh — internationally recognized as part of Azerbaijan since the collapse of the Soviet Union, but in practice ruled by Armenia since 1994 — has witnessed fierce fighting on and off for 30 years.

The breakaway state, known as the Republic of Artsakh, has a population of roughly 150,000, mostly ethnic Armenian and Christian. They're outnumbered by a largely Muslim majority in Azerbaijan.

Heavy tanks, helicopters and rockets have been deployed, and the capital of Artsakh, Stepanakert, has come under direct bombardment. The unexpected intensity of the latest clashes that erupted along border regions Sunday has triggered fears that other, bigger regional players, such as Turkey and Russia, could be drawn into the dispute.

"It became clear from the get-go that this was an entirely different affair, and in Armenia we are treating this like war,"  said Raffi Elliott, 30, a Canadian-Armenian who since 2012 has lived in the capital, Yerevan, where he works for a tech startup.

Elliott says he and his wife and two young children were in the city during the last flare-up in July, and the one before that in 2016, but the ferocity of the opening battles and the heavy casualties already taken by both sides makes this situation feel "unprecedented."

"My colleagues and I all went to donate blood, and people are lining up to contribute to donation drives for food, water, clothing and medical equipment for the people in Karabakh who are being shelled," he told CBC News in an interview.

"You don't really hear patriotic grandstanding or stuff — it's more of a 'We're facing an existential threat and were ready to face it together,'" he said.

"Existential" is also the word used by Neil Hauer, a Canadian security analyst who follows developments in the Caucasus from his home in Tbilisi, Georgia.

"This is very significant in that it looks like it's on the brink of a full-scale war," said Hauer.

Armenia has just signed into law order banning men 18+ from leaving the country. Martial law is in place and full-scale mobilization is occurring. Armenians outside the country are trying to return home to enlist. It is hard to overstate how existential this battle is seen there.

The leaders of both Armenia and Azerbaijan have declared martial law and put their nations on a full military mobilization, blaming each other for the escalation.

Internet and most communication links have been cut, but some photos and videos posted online purport to show buildings damaged in the current conflict and families huddling together in basements to avoid airstrikes.

The two nations have used duelling YouTube channels to showcase the destruction each claims to have inflicted on the other, and to try to rally their populations with propaganda victories.

On the Azerbaijan Ministry of Defence account, one video purports to show an Armenian truck being destroyed from the air, presumably by a drone overhead. Armenia's military posted what appears to be a video of one of its airstrikes obliterating an Azerbaijani tank.

WATCH | The latest in the dispute in Nagorno-Karabekh: 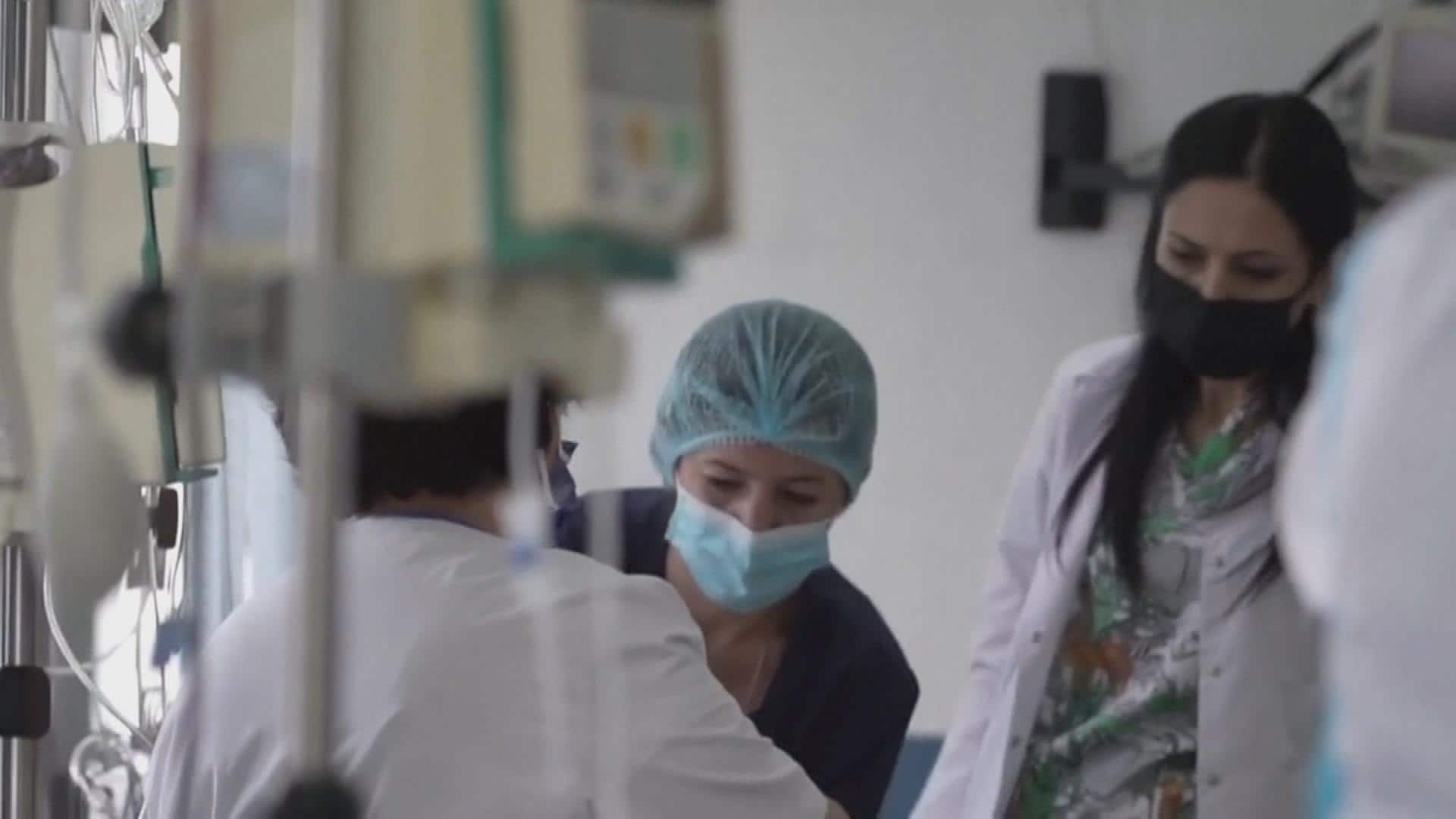 25 days ago
0:53
As Armenia and Azerbaijan battle over the disputed Nagorno-Karabakh region, a local hospital treats both civilians and combatants. 0:53

Azerbaijan's foreign minister said Monday that six Azeri civilians had been killed and 19 injured since the fighting began. Interfax news agency quoted an Armenian defence ministry representative as saying 200 Armenians had been wounded.

Nagorno-Karabakh reported Monday that 28 more of its soldiers had been killed. It had said on Sunday that 16 of its servicemen had been killed and more than 100 wounded after Azerbaijan launched an air and artillery attack.

Over the decades, Azerbaijan and Armenia have engaged in peace talks to try to settle the status of the territory, but with little progress.

In July, 16 people were killed in clashes, which in turn triggered large street protests in the Azerbaijani capital of Baku and demands for the government to retake Nagorno-Karabakh by force.

Most independent accounts suggest the current conflict began with an assault by Azerbaijani troops and armour at several points along the former ceasefire line, although it also appears several villages in Armenia proper were also targeted.

Hauer says a significant change in the dynamic of the conflict is Turkey's decision to take on a more direct role in support of Azerbaijan. Its President, Recep Tayyip Erdogan, has referred to Armenia as the "biggest threat to regional peace."

"Credible reports appear to suggest that Turkish drones may have been used," said Hauer, also noting that journalists from Turkish television were on the front lines with Azerbaijani forces during the initial battles, as if they were tipped off the attack was coming.

Armenian diplomats have also accused Turkey of sending several thousand rebel fighters from northern Syria to join in the battle on Azerbaijan's side, though both Turkey and Azerbaijan deny that.

Hauer says if Azerbaijan persists with its military assault and manages to capture portions of Nagorno-Karabakh, it could turn into a humanitarian catastrophe for the civilian population.

"Statements by Azerbaijani officials over the years have been that they want to wipe out the Armenian presence in the region," he said.

The relationship between Turkey and Armenia is haunted by the mass killings of Armenians by Ottoman Turks before, during and after the First World War.

Their 300-kilometre-long border has been closed for the past 30 years, and Turkey's government has refused repeated calls by the international community, including Canada, to recognize the genocide for what it was.

But whatever desire Turkey may have to increase its military influence in the region will run up against Russia's partnership with Armenia.

Russia has a permanent military base about 120 kilometres north of Yerevan, where it stations roughly 3,000 troops.

Hauer says the garrison is meant to deter Turkey from taking any action against Armenian territory. A direct attack would almost certainly trigger a response by Russia.

On Tuesday, Canadian Minister of Foreign Affairs François-Philippe Champagne and Dominic Raab, foreign secretary of the U.K., released a joint statement saying they are "deeply concerned by reports of large scale military action" in the region.

"We call for the immediate end of hostilities, respect for the ceasefire agreement, and the protection of civilians."

A group of bipartisan Canadian parliamentarians who make up the Canada-Armenia Friendship Group released a statement Monday warning Turkey — a NATO ally — not to get involved.

"The ongoing rhetoric from Turkish leadership, from official channels in particular, is completely unhelpful," Ontario Liberal MP Bryan May told CBC News in an interview. Turkey's foreign minister has called Armenia an "occupying state," and other Turkish government officials have called Armenia's presence in Nagorno-Karabakh "a crime against humanity."

More than 60,000 Canadians claim Armenian ancestry, mostly in Montreal and Toronto, and May says the development of strong political institutions in Armenia is something Canada has strongly supported — and needs to get behind now.