Thousands of people were under orders to evacuate their homes in regions surrounding the San Francisco Bay Area Wednesday as nearly 40 wildfires blazed across California amid a blistering heat wave now in its second week.

Thousands of people were under orders to evacuate their homes in regions surrounding the San Francisco Bay Area Wednesday as nearly 40 wildfires blazed across California, killing a helicopter pilot on a firefighting mission amid a blistering heat wave now in its second week. Smoke blanketed the city of San Francisco.

The past three days have witnessed a historic lightning siege, causing 10,849 strikes and sparking over 367 new fires, according to the California Department of Forestry and Fire Protection.

The department also announced that a helicopter on a water dropping mission in Fresno County had crashed, killing the pilot who was the only person aboard.

Police and firefighters early Wednesday went door-to-door in Vacaville, a city of about 100,000 between San Francisco and Sacramento, in a frantic scramble to warn residents to leave. Fire officials said at least 50 structures were destroyed and 50 damaged, and four people were injured.

Ash and smoke filled the air over San Francisco, which is surrounded by at least five wildfires in neighbouring counties, including in Vacaville.

"This is an incredibly emotional and stressful time for most of us who've endured a number of wildfires over the last few years," said Sonoma County Sheriff Mark Essick.

'A serious threat' to public safety as resources strapped

He conceded that resources are strapped statewide.

"It's difficult to second guess what the fire commanders are doing with their aircraft. But it's not like last year when we saw just a huge wealth of resources flowing into the county," he said. "It is what it is."

In San Mateo and Santa Cruz counties, about 22,000 people were ordered to evacuate, said Jonathon Cox, a spokesman for the California Department of Forestry and Fire Protection.

"This is a very active timber fire burning in two counties with a serious threat to both public safety and for structures that are out in front of it," he said.

Television footage showed some homes in flames and thick ash dropping in a rural area near Interstate 80 as the fire appeared to head toward more densely populated areas. 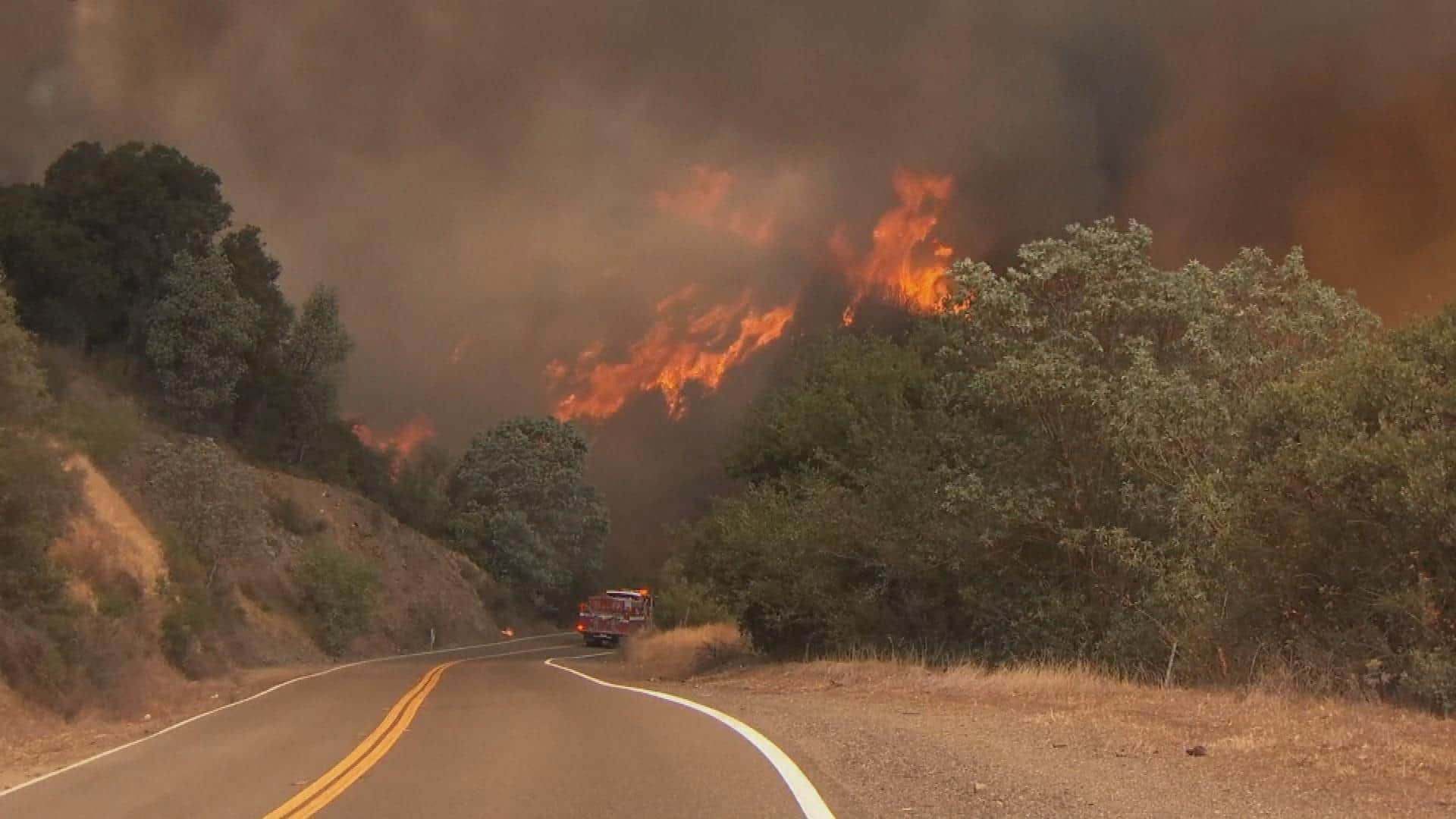 2 months ago
0:31
Uncontrolled wildfires, caused by lightning strikes, are forcing thousands of people to flee in northern California. Steep terrain is making it difficult for firefighters to get the fires under control. 0:31

Diane Bustos told KPIX-TV that she and her husband tried to drive out but their vehicle caught on fire and they had to flee on foot.

"I got all these flames on me and I lost my shoe, but I made it. God saved me," she said.

The California Department of Forestry and Fire Protection said the blaze was exhibiting "extreme fire behaviour" and challenging firefighters.

Thousands of homes and businesses were threatened in the wine-producing counties of Napa and Sonoma in an area devastated by a series of deadly blazes in the last three years. At least seven fires were grouped together as one of two major lightning fires in Northern California, a nod to their origins just a day earlier.

Powers said much of the fire was burning through rural areas with steep terrain, making it difficult to get crews in.

In Napa County, Gail Bickett, 80, loaded up her three dogs in a truck to evacuate as the fire burned behind houses across the road, the San Francisco Chronicle reported.

Gov. Gavin Newsom ordered a statewide state of emergency Tuesday and requested 375 fire engines from out of state to fight the blazes.

Blazes engulfed rural and forest areas near the San Francisco Bay Area, near Salinas in Monterey County, around Oroville Dam north of Sacramento, forested areas west of Silicon Valley, in remote Mendocino County and near the Nevada state line north of Lake Tahoe.

The cluster of wine country fires threatens an area that only last year grappled with another massive blaze that forced 200,000 to flee — a task made more complicated this year because of the pandemic.

On Tuesday afternoon, the fire was moving toward an area called Atlas Peak that burned in 2017 in a blaze that killed six people and destroyed nearly 800 buildings. The California Highway Patrol said helicopter crews were unable to do rescues in the area because the smoke was too thick to fly in.

Several fires also were burning in northern coastline areas and in Southern California.

To the south, evacuations were ordered for all of Boulder Creek to the west of Silicon Valley, a community of 5,000 high in the Santa Cruz mountains where windy, long, forested roads, some paved, some dirt, can easily become blocked during storms or fires.

California's heat wave has strained its electrical grid and led to some rolling blackouts.

After warning Tuesday that as many as two million homes and businesses might be subject to rotating blackouts of an hour or more, the California Independent System Operator, a nonprofit organization that oversees the state power grid, cancelled its emergency declaration Tuesday night.

"That's a wrap. You did it, California consumers," the system operator tweeted, adding: "Thank you for keeping the electricity flowing."

At a cooling centre in Sacramento on Wednesday, Newsom praised industries, businesses and residents for driving down energy usage but warned the state was still in the midst of a "critical 48-hour period."

High temperatures were expected to continue through the week, although forecasts called for the high pressure to gradually weaken, the National Weather Service said.