At least 9 dead in wildfires in California, Pacific Northwest

In the past 48 hours, four people died from fires in California, while four others were killed in Oregon and a one-year-old boy died in Washington state, police reported. Thousands faced evacuation orders in the three states.

The number of people under evacuation orders in Oregon alone climbed late in the day to some 500,000, about an eighth of the state's total population, a spokeswoman for the state Office of Emergency Management said.

Thousands more were displaced north and south in the neighbouring states of Washington and California.

Police have opened a criminal investigation into at least one Oregon blaze, the Almeda Fire that started in Ashland near the border with California, Ashland Police Chief Tighe O'Meara said.

Police in Medford as well as in Douglas County to the north cautioned against rumours that left-or right-wing arsonists were starting the fires.

The blazes tore through at least five communities in Oregon's Cascade mountain range as well as areas of coastal rainforest normally spared from wildfires. In eastern Washington state a fire destroyed most of the farming town of Malden.

1 year ago
Duration 2:31
U.S. Coast Guard veteran captures the panic as fires overtake a neighbourhood and residents desperately call for people to flee their homes. 2:31

In central Oregon search and rescue teams entered torched communities like Detroit where firefighters led residents on a dramatic mountain escape after military helicopters were unable to evacuate the town.

A 12-year-old boy was found dead with his dog inside a burned car and his grandmother was believed to be dead after flames engulfed an area near Lyons, about 80 km south of Portland, Ore., the Marion County Sheriff's Office said.

To the south, most of the city of Medford, population 82,000, was told to evacuate or prepare to evacuate as fires burned to the north and south.

Some people counted their blessings after fleeing the Bear Creek trailer park where nearly every home burned.

1 year ago
Duration 1:45
More than 200 wildfires tearing through western U.S. have killed at least eight people and caused catastrophic damage. 1:45

"Thank God we were at home," said Julio Flores, a resident of the community who escaped with two children who would have been alone had his work hours not been cut due to the coronavirus pandemic.

Firefighters said unusually hot, dry winds out of the east supercharged blazes, spreading flames from community to community, and then from house to house.

"When it really gets windy these embers are going for miles," said firefighter Andy Cardinal in Eagle Point, north of Medford where the town of around 10,000 was on standby to evacuate.

"We have never seen this amount of uncontained fire across the state," Brown told a news conference. "We are feeling the acute impacts of climate change."

Firefighters expected two of the state's largest fires, burning around 35 kilometres southeast of downtown Portland, to merge. In nearby Molalla about 10,000 residents were relocated while in Canby, a community of 18,000 around 15 kilometres from central Portland, residents were told to be ready to leave.

In California, officials said some 64,000 people were under evacuation orders while crews battled 29 major fires across portions of the most populous U.S. state.

About a third of those evacuees were displaced in Butte County alone, north of the capital Sacramento, where the North Complex wildfire has scorched more than 247,000 acres and destroyed over 2,000 homes and structures.

The remains of three victims were found in two separate locations of that fire zone, according to Butte County Sheriff Kory Honea, bringing the total death toll from this summer's devastating spate of California wildfires to at least 11.

Wildfires have now burned over 3.1 million acres in California in 2020, marking a record for any year, with six of the top 20 largest wildfires in state history occurring in 2020, state fire authorities reported on Thursday.

In Washington, a man and a woman were in critical condition with burns after their 1-year-old son died as they tried to escape the state's largest wildfire burning in mountains about 100 miles northwest of Spokane, the Okanogan County Sheriff's Office said in a statement. 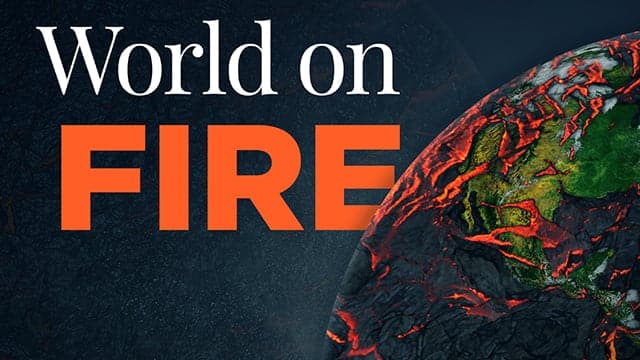 World on Fire34:26EPISODE 2 - The Pyrocene
The Pyrocene. The word was coined to describe a new age of fire that is changing our world. In this episode, we head to the frontlines of wildfires and bushfires around the globe. Hear first-person accounts from the people who run toward the flames, instead of away. Reporters in California and Canada talk about their experiences, and we’ll also hear from survivors of some of the most devastating fires in recent memory. That’s World on Fire, with hosts Adrienne Lamb and Mike Flannigan 34:26
CBC's Journalistic Standards and Practices|About CBC News
|Corrections and Clarifications