Aided by weather and reinforcements, firefighters were cautiously optimistic Tuesday about their progress to pen in California wildfires that have killed at least seven people and burned more than 1,200 homes and other buildings.

Firefighters helped by weather, reinforcements in battling blazes that killed at least 7

Aided by weather and reinforcements, firefighters were cautiously optimistic Tuesday about their progress to pen in California wildfires that have killed at least seven people, with four more reported to be missing, as more than 1,200 homes and other buildings burn.

A warning about dry lightning and strong winds that could spark more fires was lifted for the San Francisco Bay Area on Monday morning, a huge relief to commanders battling three enormous blazes in the area and in California's wine country north of San Francisco.

Firefighters in wine country have cleared containment lines around 25 per cent of the fires there that have scorched more than 1,424 square kilometres and destroyed more than 930 buildings. It is now the second-largest blaze in California history.

Officials said progress was also made against a fire in San Mateo and Santa Cruz counties with the help of rain Sunday evening and calmer weather Monday. The 318.5-square-kilometre fire was 17 per cent surrounded after destroying 330 structures. Some 25,000 structures remained threatened.

Although the weather may have lent some aid, authorities are still searching for four missing people after the fire known as the CZU Lightning Complex destroyed 330 homes and other structures, Santa Cruz County Sheriff Chief Deputy Chris Clark said in a news briefing.

WATCH | Resident in midst of Northern California fires hangs back to save animals: 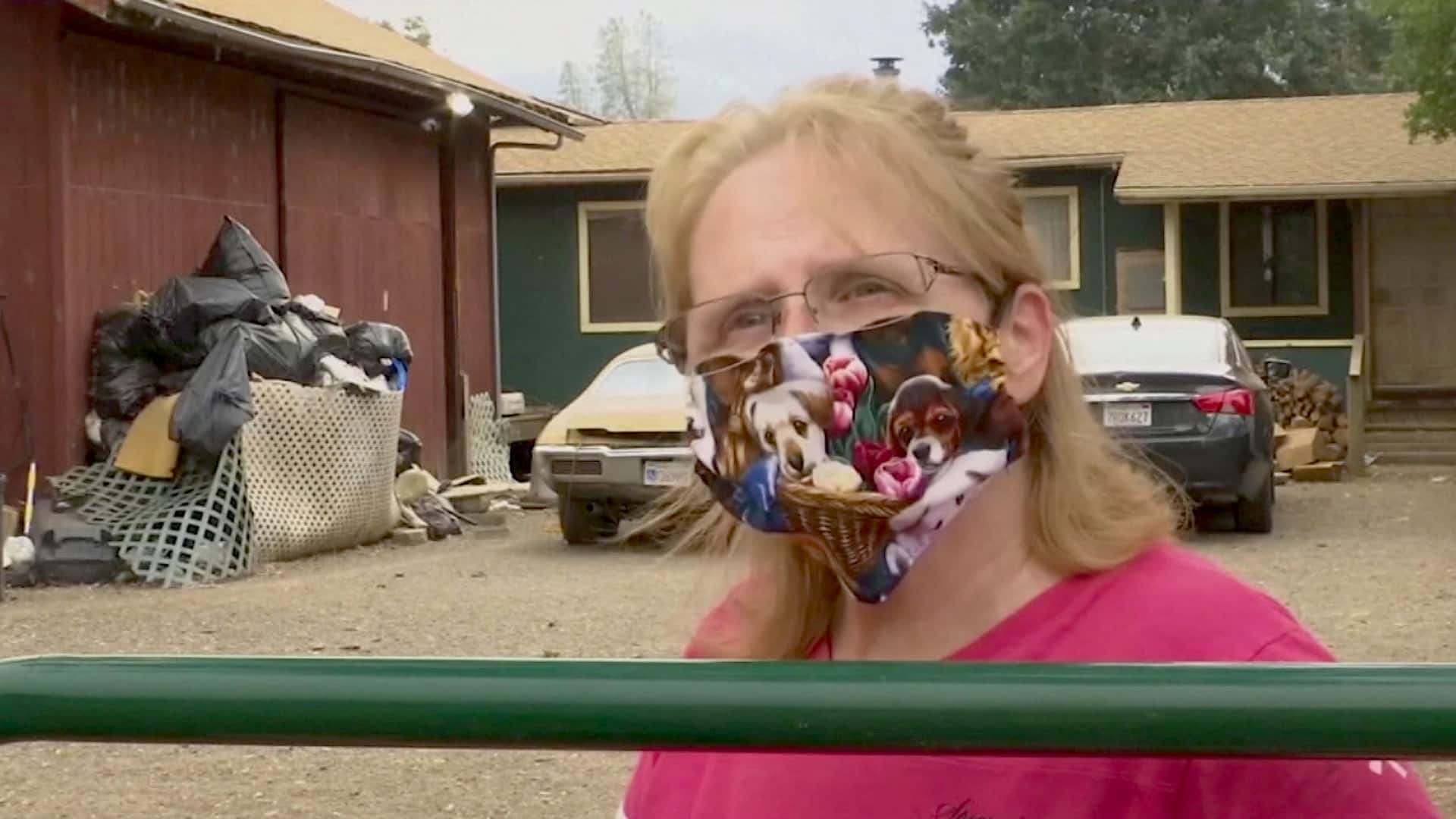 3 months agoVideo
0:54
"If it becomes necessary, then we will leave," said Middletown, Calif., resident Rebecca Pledger, as fires raged around her. 0:54

"The past couple days we've seen significant progress in our firefight on this incident," said Mark Brunton, operations chief with the California Department of Forestry and Fire Protection, which is known as Cal Fire. "The weather's really co-operating with us."

Helicopters dropped more than 757,082 litres of water on the blaze, he said, calling it "the best day yet."

Danger far from over

In addition to better weather, fire crews along with bulldozers and other equipment were arriving from other states.

But officials warned the danger was far from over and admonished residents to stay out of evacuated areas. Six people who returned to a restricted area south of San Francisco to check on their properties were surprised by fire and had to be rescued, the San Mateo County Sheriff's Office said.

Looters have been warned they'll be arrested, and some people have been taken into custody, including a man found with $5,000 in his car, authorities said. Detectives were also investigating seven reports of missing people.

Evacuees tempted to return to check on their homes should think again, fire officials said.

"It is highly dangerous in there still," said Jonathan Cox, a Cal Fire deputy chief, of the blaze north of Santa Cruz. "We have bridges that have failed ... that may not appear failed to people that they may drive on. It is not safe."

An estimated 170,000 people are under evacuation orders and tens of thousands of homes remain under threat from fires around the state.

Elinor Slayer fled her home in the redwood-dotted mountain town of Boulder Creek north of Santa Cruz on Tuesday evening along with her four children when they started seeing burned leaves and large pieces of ash.

"Luckily for me, I have a 13-year-old daughter who is very cautious about wildfires. We had bags packed already," said Slayer, 48. "We hadn't gotten an evacuation order yet, but my daughter said, 'It's time to go.' "

She said the family is counting their blessings that everyone is safe and hoping their home is, too.

"We don't know what we're going to return to."

The siege of wildfires in the state has been astonishing, especially since California's peak fire season is usually during the hot, windy days of September and October.

In just a week, the wine country fire became the second-largest by size in recent California history, followed by another fire that has burned into seven counties and is just 15 per cent contained.

Gov. Gavin Newsom said that at this time last year, California had about 4,300 wildfires that burned about 226.6 square kilometres, while the toll this year is 7,000 fires and nearly 5,698 square kilometres.

"We are dealing with different climate conditions that are precipitating in fires the likes we haven't seen in modern recorded history," he said Monday.

The fires are being blamed for at least seven deaths, including 70-year-old Mary Hintemeyer, her boyfriend Leo McDermott, and his son, Tom, said Hintemeyer's son, Robert McNeal.

McNeal told KPIX-TV that he lost contact with his mother Tuesday night as the fires sped up. He said his mother had tried to go into town earlier that day but turned back at a roadblock where authorities said if she went through she wouldn't be allowed back. She returned home to get her boyfriend, who was in a wheelchair.

Authorities found their remains among the ruins on the Napa County property Wednesday, he said.

"Just get out, don't wait," McNeal told the TV station, urging people to follow evacuation orders. "If you think it's going to be too much to get your sprinklers on before you get out of there, forget those, too. Forget it. Get out. Just get out. It ain't worth it."