The Calbuco volcano in southern Chile erupted for the first time in more than four decades on Wednesday, sending a thick plume of ash and smoke nearly 20 kilometres into the sky and forcing 4,000 people from their homes. 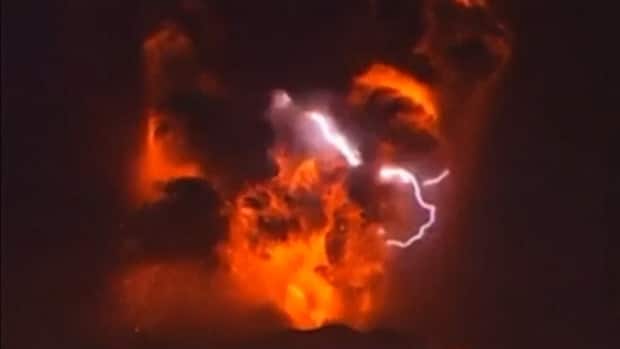 Volcano Calbuco in southern Chile erupted for the first time in more than four decades on Wednesday, sending a thick plume of ash and smoke several kilometres into the sky.

As night fell, about 4,000 people had so far moved out of the area, an evacuation radius of 20 kilometres had been established and classes were canceled in surrounding towns, authorities said.

The national emergency network Red Nacional de Emergencia tweeted out a short video from a camera at the Marcel Marchant airport that captured the start of the eruption.

President Michelle Bachelet is scheduled to travel to the affected area on Thursday.

There are no reports of deaths, missing persons or injuries, Interior Minister Rodrigo Penailillo said. He urged residents to evacuate the area and warned of possible lahars, a mix of water and rock fragments that flow down a volcano's slopes and river valleys.

Winds blowing northeast were pushing the column of ash and smoke toward Argentina.

"In this situation, with the eruption column so high, the main risk is that it collapses, falls due to gravity because of its own weight and causes a pyroclastic flow," Gabriel Orozco, a vulcanologist with Chile's geological and mining service, said on local TV.

A pyroclastic flow is a superheated current of gas and rock that can destroy nearly everything in its path and travel at speeds upwards of 200 to 300 kilometres per hour.

LATAM Airlines said it has canceled flights to and from neighboring Puerto Montt, the area's largest city, because of the presence of volcanic ash, which can potentially damage aircraft and make flying dangerous.

Canadian-born Trevor Moffat, who lives in Ensenada, some 10 kilometres from the volcano, said the eruption happened without warning. Volcano Calbuco's last known eruption was in 1972 and the most recent major eruption happened in 1961.

"It sounded like a big tractor trailer passing by the road, rattling and shaking, guttural rumbling ... we left everything there, grabbed my kid, my dog, got in the car with my wife," said Moffat, who was driving to nearby Puerto Varas at the time.

"All the neighbours were outside, a lot of young people crying. Armageddon-type reaction."

Pictures on television and Twitter showed a spectacular mushroom-shaped column billowing into the sky with occasional lighting bolts shooting through.

The eruption was seen in other towns at least 50 kilometres away — including in neighbouring Argentina, where the newspaper Infobae tweeted out this image taken in the town of Bariloche, near the Argentina-Chile border.

Stephen Fudge of Toronto was waiting for a ferry in the area on Wednesday, having just come back from a three-day sea kayaking trip through the fjords of Patagonia, when the volcano began to spew.

"All of a sudden, we saw the plume of smoke and quickly grabbed our cameras, because we instantly knew this was an eruption," he told CBC News Network on Thursday.

The timing of the eruption was actually in Fudge's favour — he had planned to hike Calbuco up to the snow line on Thursday.

"There's something a little bit shocking to be looking at the mountain you're going to hike ... and suddenly see a plume of ash rising from it," he said.

Canadian Donna Wanless and her common-law partner, Stephen Bahr, saw it from about 25 kilometres away while they were on their way back to Puerto Varas after hiking another volcano in Vicente Perez Rosales National Park.

"We were on a local city bus," she wrote in an email to CBC News. "A local woman that was sitting in front of us received a phone call and then looked back in the direction we were coming from and started tugging on the driver's shirt sleeve, telling him to stop. So then, everyone on the bus looked back and saw the plume of smoke/ash."

The news agency Informaciones Chile reported that forest fires had erupted in areas near the volcano, and the country's National Mining and Geology Service issued a high alert barring access to the mountainous area around the volcano

"There are a lot of people out in the streets, many heading to the gas stations to fill up on gas," Derek Way, a resident of Puerto Varas, told Reuters.

"A friend told me to fill everything we have with water."

Hernan de Solminihac, a former minister of mining and public works, was one of many people in the area tweeting out dramatic photos of the massive plume emanating from the volcano.

Chile, on the Pacific Rim of Fire, has the second largest chain of volcanoes in the world after Indonesia, including around 500 that are potentially active. Calbuco is considered one of the three most dangerous of Chile's 90 active volcanoes.

In March, volcano Villarrica, also in southern Chile, erupted in spectacular fashion, sending a plume of ash and lava high into the sky, but quickly subsided.