'The old guard in revolt': Why ex-presidents are violating code of silence to fight 'Trumpism'

It's a golden rule that ex-presidents don't criticize a successor. But George W. Bush and Barack Obama both took poorly veiled shots at Donald Trump this week, and some experts think the ex-president pile-on may have only just begun.

In an extraordinary violation of a golden rule about ex-presidents criticizing a successor, former U.S. presidents George W. Bush and Barack Obama both implicitly rebuked Donald Trump on Thursday. But Bush's critique is particularly remarkable, experts say, since it's seen as an attack on a fellow Republican in a civil war over the soul of the Grand Old Party.

That the back-to-back takedowns came from two ex-presidents in rival parties lent gravity to their words, presidential historians say.

Bush represents the establishment Republican wing; Obama is often considered to be the most popular Democrat in the country.

Their veiled swipes at Trump, even without uttering his name, signal how far the rise of white nationalism has pushed politicians from across the aisle, particularly those with no political futures, to speak out.

"It's the old guard in revolt against Trump and Trumpism. This is the battlefield right now," said Douglas Brinkley, a prolific presidential biographer and history professor at Rice University in Houston.

"There's no question that having an ex-president from the same party squaring off on a sitting president, that's not something George W. Bush relishes doing." 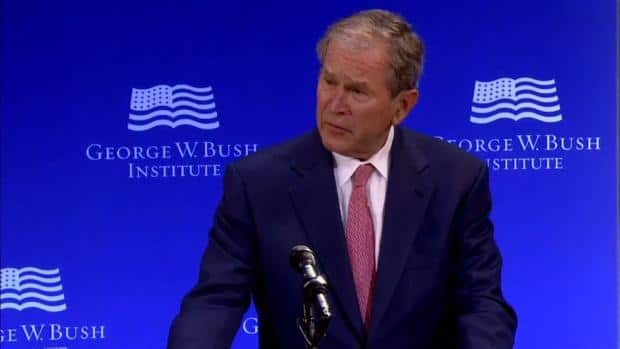 In pointed remarks at a forum in New York on Thursday, Bush denounced a national mood that has "emboldened" bigotry and a wave of politics prone to "conspiracy and outright fabrication."

"We've seen nationalism distorted into nativism; forgotten the dynamism that immigration has always brought to America."

"With Bannon declaring war on the Republican establishment," he said, "Bush has decided to enter politics with great reluctance to warn about the danger of continuing on course with Trump."

States are looking for their candidates, Brinkley said, and the question for Republicans is: "Will it be a Trumpian or an establishment candidate?"

"Bush is telling these people: 'Run — we're on your side, and so are many other Republicans, because we need to stand up to Trumpism."

Presidential biographer Jean Smith, who wrote a withering indictment of the 43rd commander-in-chief in 2016's Bush, has no doubt Bush is mindful of repairing his legacy after being vilified for years for his foreign policy on Iraq.

"He realized he messed up. Now he's trying to remedy that," Smith said. "His career as an ex-president has been exemplary."

His statement on Trumpism appears to be working to restore that reputation, Smith said, given the positive press he's seen for Bush's comments.

Obama was more circumspect on Thursday. Speaking hours after Bush, he decried the "the politics of division" at a rally in Richmond, Va. The first black president has for months largely stayed quiet while Trump worked to dismantle his legacy by undermining or abandoning everything from the Paris climate accord to the Iran nuclear deal and the Deferred Action for Childhood Arrivals program (DACA).

Trump has repeatedly invoked Obama's name and record when challenged about his treatment of Gold Star families of fallen soldiers.

Obama largely resisted commenting on Trump — until a rally Thursday night for a Democrat running for the governor's mansion in Virginia.

"You'll notice I haven't been commenting a lot on politics lately," Obama told 7,500 supporters before decrying what he characterized as a politics of anger that has turned too "nasty."

"We've got folks who are deliberately trying to make folks angry," he said, avoiding Trump's name, "to demonize people who have different ideas, to get the base all riled up because it provides a short-term tactical advantage."

Bush's stinging remarks, despite his partisan alignment with Trump, could have opened the door for Obama. 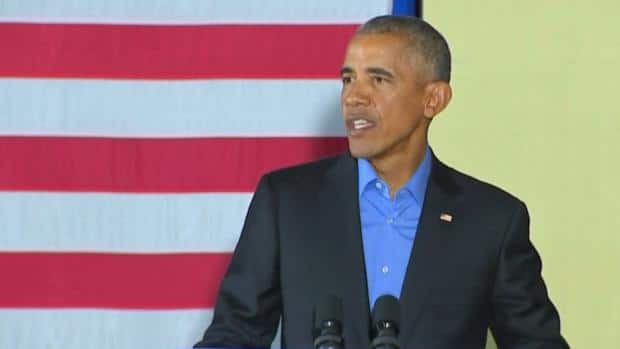 Obama: 'We are rejecting the politics of division'

"He must feel liberated by having George W. Bush" go on the attack first, Brinkley said. "But Trump is a game-changing character, so all these old-fashioned rules are having to be thrown by the wayside because there's a political crisis going on in America."

He said "it was just a matter of time" before the former statesmen, now unburdened by political ambitions, came out to condemn the ultra-nationalism championed by many Trump supporters.

And the pile-on from ex-presidents may have just begun.

"I think there's going to be historical hostility to the present president for what he's done to the Obama reputation and to the Bush reputations," said Henry Graff, the retired historian who pioneered Columbia University's Seminar on the Presidency, which counted among its attendees presidents Harry Truman and Gerald Ford.

"It's not ordinary. Part of the business of being in what's called the imaginary President's Club is all former presidents remember how difficult the tasks of the White House are, and as a result, very few presidents comment adversely on each other."

Role of a president

Last month, former president Bill Clinton criticized Trump on Facebook for his "cruel" flip-flop decision to end DACA. And Jimmy Carter, offering his assessment of the 45th president's leadership, urged him to "tell the truth." The 39th president also threw cold water on Trump's confidence that his son-in-law, Jared Kushner, will engineer peace in the Middle East.

Mark Updegrove, the former director of the Lyndon Baines Johnson Presidential Library in Texas, said the "unwritten code" of ex-presidents biting their tongues rather than critiquing successors appears to be slipping as those who departed the Oval Office grow wary of a perceived vacuum in moral authority.

Trump, for example, repeatedly stated over the summer that "both sides" deserved blame for the killing of an anti-racism activist in Charlottesville, Va., when clashes with white nationalists became violent.

"This is broader than Donald Trump," Updegrove said. "Clearly, as the president, Donald Trump has refrained from offering moral guidance and clarity, which is the role of a president. That's what we look to our presidents for."