Women hired to entertain businessmen and politicians at a men-only charity fundraising gala in London were groped, propositioned and sexually harassed at the secretive event, the Financial Times newspaper reported, drawing condemnation in British Parliament on Wednesday.

Women hired to entertain businessmen and politicians at a men-only charity fundraising gala in London were groped, propositioned and sexually harassed at the secretive event, the Financial Times newspaper reported, drawing condemnation in British Parliament on Wednesday.

Coming at a time of intense public debate about sexual harassment in the workplace, the report caused an immediate backlash against the Presidents Club charity. One major corporate sponsor severed ties and two children's hospitals announced they would return all donations.

The Financial Times reported that over a six-hour period, hostesses hired for the gala had been subject to fondling, lunging, attempts to kiss them, lewd comments and requests to join guests in hotel bedrooms. Some said men had put their hands up their skirts, the report said, and one complained a guest had exposed his penis to her. 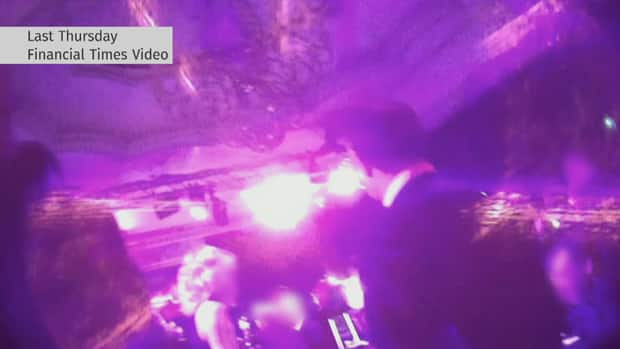 3 years agoVideo
2:47
A culture of harassment has been exposed at men-only gala in the U.K. A report in the Financial Times newspaper details a graphic scene in which women were groped, propositioned and sexually harassedat a men-only charity fundraising gala in London. 2:47

British Prime Minister Theresa May was uncomfortable reading reports of alleged sexual harassment at a charity gala attended by political and business elite in London, her spokesperson said.

"The prime minister was uncomfortable at the reports that she read this morning. I say 'reports' in part because clearly this is an event to which she would not be invited, because she is a woman," the spokesperson told reporters.

Carney, Johnson said to be unaware

The Bank of England told the Financial Times the Carney prize will not be redeemed and said it did not approve the prize. The statement said the Canadian-born governor was dismayed by the allegations in the reporting.

"We can confirm that the winner will not be able to take up the prize of spending time with the governor," the Bank of England said, according to the newspaper.

May's spokesperson told reporters regarding Johnson: "The foreign secretary had not agreed to support this event and knew nothing about the inclusion of a lunch with him in any auction,"

In a hastily convened debate in Parliament, furious women politicians lined up to denounce the behaviour described in the article as despicable.

The government's equalities committee chair Maria Miller tweeted she hopes "every man who attended this event will think twice before accepting another invitation to a men-only event with more than 100 female hostesses."

"It is quite extraordinary to me that in the 21st century allegations of this kind are still emerging," said Anne Milton, junior education minister, during the debate. "Words fail me."

She announced that luxury goods businessman David Meller, one of co-organizers of the event, was stepping down as a non-executive board member at her ministry.

The comments came after the Opposition pounced on the Meller association with the Conservatives.

"What happened was women were bought as bait for men, rich men, not a mile from where we stand … ," said Jess Phillips, a Labour MP. "It is totally unacceptable."

The Conservatives have not been immune to the wave of allegations directed at powerful men across industries and society to take hold in recent months in the U.S. and Europe.

Britain's First Secretary of State Damian Green was forced to resign after making "inaccurate and misleading" statements during an investigation into pornographic images found on a Parliament computer in his office in 2008, while U.K. Defence Secretary Michael Fallon weeks earlier stepped down after historic allegations of inappropriate touching.

Last week's gala, held in the ballroom at the Dorchester Hotel on prestigious Park Lane, was attended by 360 men from British business, politics and finance, and the entertainment was provided by 130 hostesses hired for the occasion.

The Financial Times said the trust's other chairman in addition to Meller was London property developer Bruce Ritchie.

The Dorchester Hotel said it was deeply concerned over allegations.

"We are in discussions with the organizers and an investigation is underway."

The newspaper reported that at an after-party in a smaller room off the main lobby of the Dorchester, a man described as a prominent society figure had grabbed a hostess by the waist and pulled her in against his stomach.

"You look far too sober," the man was reported as saying. "I want you to down that glass, rip off your knickers [underwear] and dance on that table."

The Times report sparked a swift backlash against the event.

Sorrell said he had attended the charity's gala event many years ago and had not seen anything like what was described in the report.

"If true, it's highly regrettable," he said.

The Charity Commission, the non-profit sector regulator, said it would be urgently investigating the Presidents Club.

Little Britain star David Walliams served as host of the event and said on social media that he was appalled by the reports.

1) Last Thursday night I hosted the Presidents Club annual charity fundraiser. I agreed to host as it is one of the biggest charity fund raising events of the year. I was there in a strictly professional capacity and not as a guest.

2) I left immediately after I had finished my presenting on stage at 11.30pm. I did not witness any of the kind of behaviour that allegedly occurred and am absolutely appalled by the reports.