A huge wetland is burning in Brazil, and the fires are far bigger than California's

The world's largest tropical wetland is not supposed to burn. And yet, Brazil's Pantanal is on fire. Some 25,000 square kilometres have already been destroyed, and experts say it's going to get worse.

The world's largest tropical wetland is not supposed to burn.

And yet, Brazil's Pantanal is on fire.

Thick smoke rises all around the village of Poconé as the wind whips it into little tornadoes. Fire crackles and races through the brush, jumping from forest to pasture to swamp.

The flames have destroyed some 25,000 square kilometres— roughly four times the area that has burned in California in 2020 so far.

A UNESCO heritage site and one of the world's most diverse ecosystems — home to dozens of endangered species and the densest concentration of jaguars anywhere — is in jeopardy. Charred jaguar carcasses now litter the ground, along with burned alligator-like caimans and fallen birds.

Local ranchers struggle to survive. Traditionally, they use fire to revitalize and clear the land, but not on this scale or under such dry conditions.

"It hasn't rained in three months, and we don't know if it will rain in September. I hope so," said Dorvalino Camargo, fanning himself with a straw hat after helping to beat back the flames. "Cattle are suffering. We are all suffering."

Preservationists who have worked most of their lives to protect the area from loggers and poachers now face a new, much deadlier threat.

"We've never dealt with fire conditions so big, so severe," said Angelo Rabelo from his home in the Pantanal. "We're just not prepared to confront it." 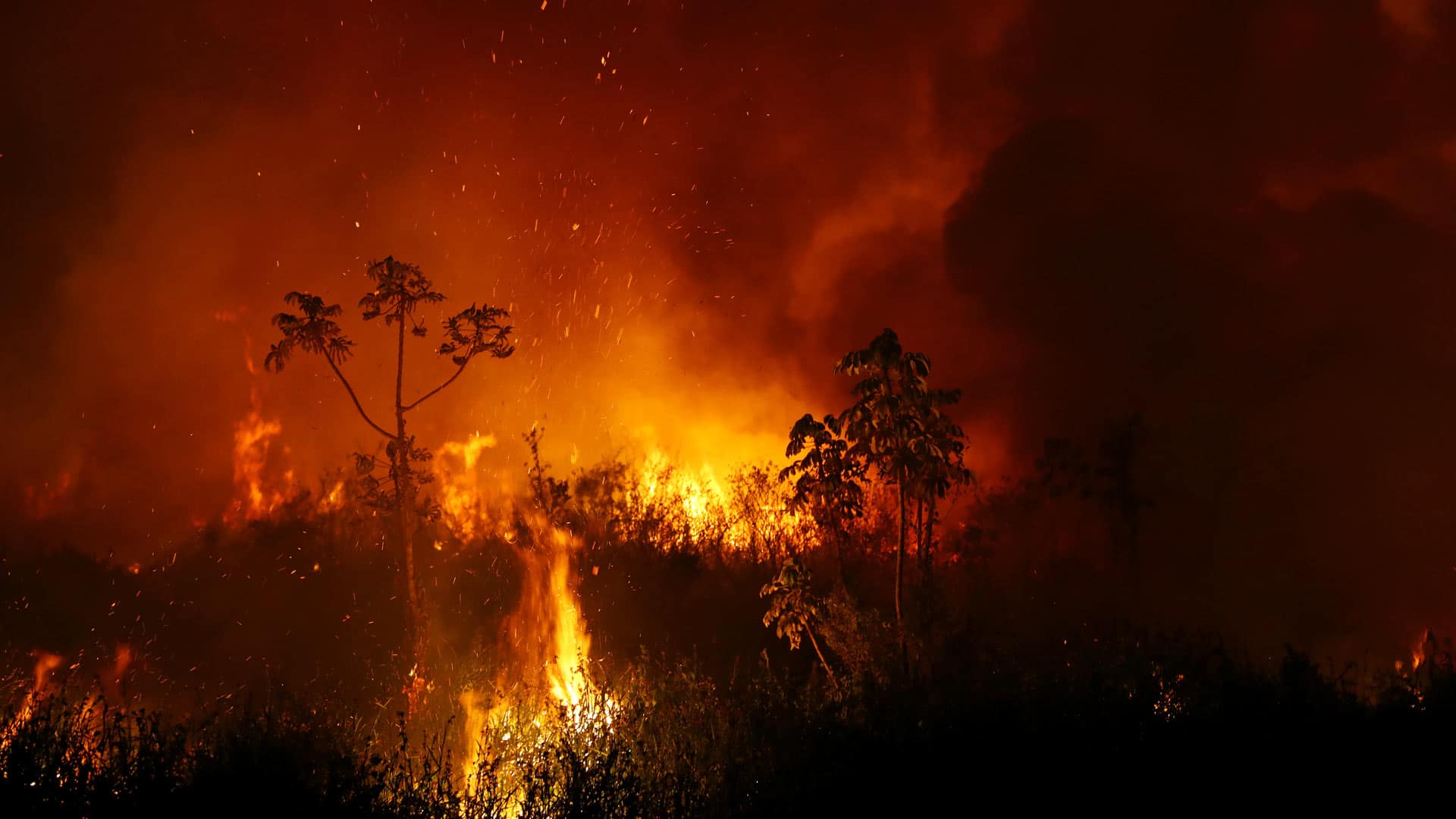 Rabelo is a former police colonel who came to the region 37 years ago to stop illegal hunting, and stayed to start the environmental organization Instituto Homem Pantaneiro.

"I feel impotent and defeated," he said. "It's a deep pain."

Normally the Pantanal gets abundant moisture from the Amazon rainforest, showers spawned in the vast jungle to the north which feed wetlands throughout the heart of South America, not only in Brazil but also in Bolivia and Paraguay.

But the Amazon itself is struggling with drought along with fire that experts have repeatedly linked to deforestation and human activity. More and more of the Amazon's wilderness has been taken over by land developers, illegal logging and expanded agriculture.

'Going to get worse'

"These fires, we have no idea where it's going to go, when it's going to stop, and as the dry season intensifies, it's just going to get worse," said Matt Finer from Amazon Conservation, a U.S.-based non-profit group that tracks fires in the rainforest through satellite images.

Amazon Conservation counted an average of 53 major blazes per day in the first week of September, up from 18 per day in August.

"This story that the Amazon is going up in flames is a lie," he said last month. The president, who was elected on a promise to expedite development of the Amazon, last year fired the head of the INPE after the agency released data showing a significant rise in deforestation since Bolsonaro took office. He has blamed NGOs for stirring up trouble, and denounced foreign governments who have criticized Brazil for its handling of the emergency.

In a speech to other South American leaders in August, Bolsonaro challenged foreign representatives to fly over the Amazon, saying that travelling by air from the far-flung cities of Boa Vista to Manaus, one would not see a single flame.

This despite the fact that his own government agencies — including INPE — have confirmed the widespread fires.

Effects will last 'for decades'

And things are only going to get worse, predicts biologist Philip Fearnside, because of continuing deforestation. He's lived in the Amazon for more than four decades, working at the National Institute for Research in Amazonia in Manaus.

He said he's seen an area "larger than France" deforested since he's been studying the implications.

"A lot of what the government is doing is encouraging [deforestation]," he said. "You have highways that are being built, roads that open up these new areas. And then people move in. You have this process of land being invaded.

The damage is likely to far outlast Bolsonaro's presidency.

"It's something that lasts for decades, not a problem that ends at the end of one presidential administration," Fearnside said.

In the wildlife-rich areas of the Pantanal, that will continue to make survival precarious.

Eduarda Fernandes is a nature guide who had been working with veterinarians trying to rescue injured animals from the wetlands, including jaguars with paws "burnt to the bone."

She says there isn't much visible life in the area, no "ants or crabs" — which serve as food for different types of animals.

"Animals will die not only due to the fires but also due to dehydration and hunger," she said. "It's very sad to see what is happening here."