With the country's political elite in freefall and the Olympics approaching, a new breed of young criminal is posing problems for a police force hit by recent budget cuts. Until recently, crime had been falling. 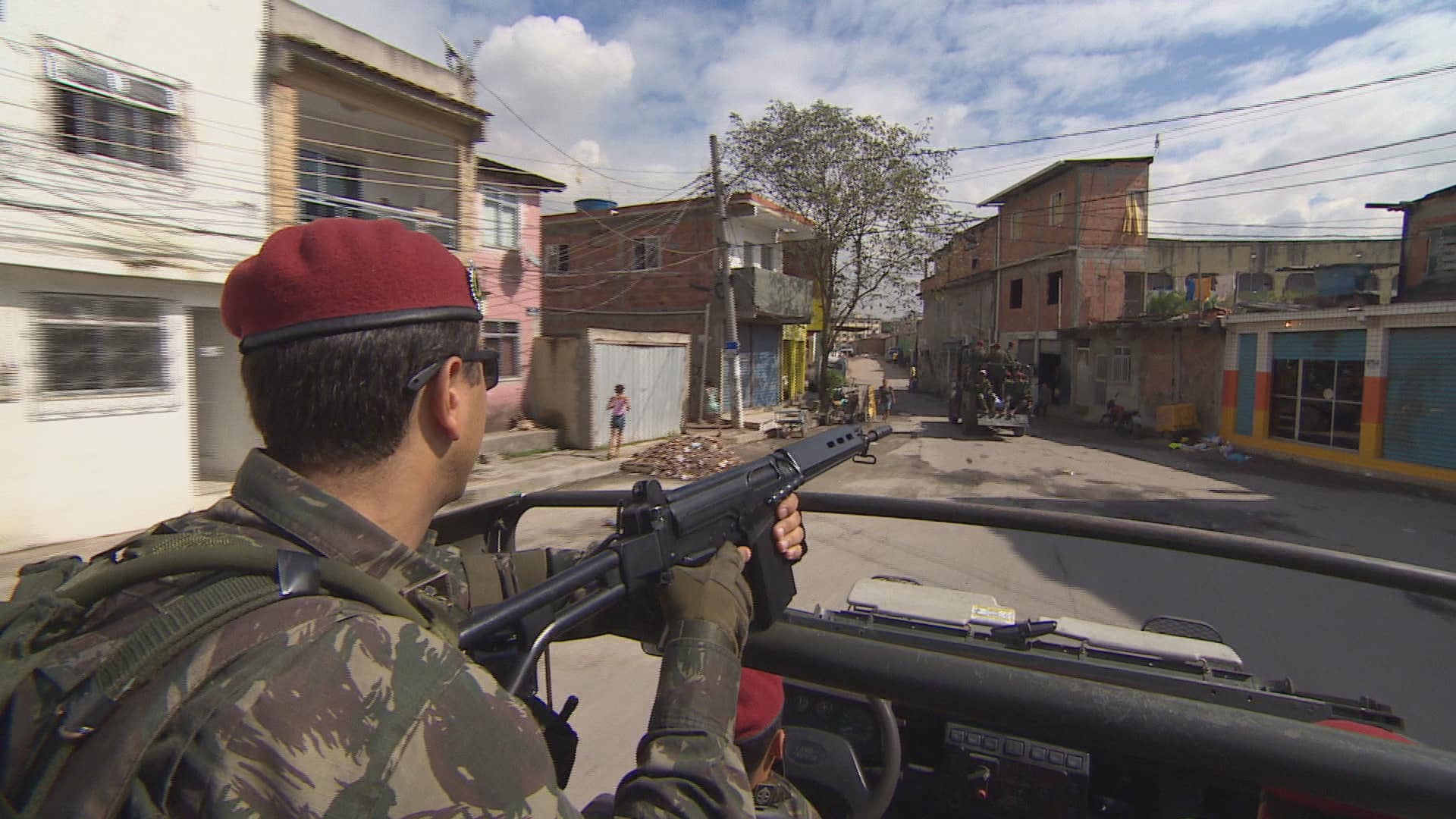 5 years agoVideo
3:04
With the Olympic Games just months away, officials are calling in the army to help 3:04

When Rio de Janeiro's state government dreamed up a new type of police force for the slums, this is the scene it had in mind: a good-looking, chiseled officer on patrol, stopping to talk to children.

The older sibling asks the cop to pat his young brother's head. Even the police officer's name — Vando Dionisio — sounds like a superhero's.

But Dionisio is no invention. In university, he studied administration, but he decided he could help more people in a uniform than in a suit.

"I think it's a gift from God," he says. "The sensation to save the life of somebody, to see the face of the children smile."

There wasn't much to smile about when Dionisio arrived four years ago in Vidigal, a slum in Rio.

Brazil has one of the highest murder rates in the world, and most violent crime happens in the slums known as favelas. That's why, in 2008, the state of Rio de Janeiro started a new program: pacifying police units, known by their Portuguese acronym UPP.

They are meant to be a kinder, gentler force, with stations built in the communities they had previously been too afraid to enter.

And while they have been having some success, these last months — with the Olympics approaching and the government of Dilma Rousseff in turmoil —  have seen an uptick in crime, particularly in some of the bigger favelas.

Dionisio takes me on patrol through the winding favela streets to show me how some things have changed for the better.

He points to the alley on his left. "That place, before people selling drugs, beer, arms," he says. "Now you see children, everyone, walking here."

Two minutes later he points to the houses up on the hill.

"The thieves were up there, and they could see everything that was happening here," he says. "Now the people that live here help us to find the thieves."

He's talking about residents like 80-year-old Amelia Oliveira who are grateful for the police presence.

Since the police began embedding in the favelas, the program's been a success, says Robert Muggah of the Igarapé Institute, an independent think tank specializiing in security and development issues.

"Since pacification, in at least 38 different parts of the city you've had a subtle change in how the police are approaching it," Muggah says. "The idea is to enter communities, try to have a permanent presence, try to establish relationships with the communities."

Crime down until recently

Muggah also says that the statistics show the plan is working.

"Homicide rates have come down a whopping 65 per cent," he says. "Violent crime has also come down significantly."

That's been the long-term trend. But over the last six months, murders, assaults and property crimes have started to go back up.

Across town from Vidigal is another favela called Santa Marta. It used to be one of the most violent in Rio until the UPP set up a station.

"Originally the police would only have access to the favela when large-scale operations were mounted," says unit commander Tatiana Lima.

But now crime is getting worse again. The spike, Lima says, is caused by a new generation of criminals.

"Youths have taken over the leadership role in the drug gangs," she says, "and they're not worried about the consequences because of a lenient juvenile justice system."

Young man with a pistol

Nowhere is that more obvious than the slum of Maré, a sprawling collection of favelas near Rio's airport. My taxi driver told me to put away my camera as we entered the area. I soon found out why.

We were forced to stop at a homemade roadblock. A young man with no shirt approached the car, pointed a pistol and demanded to know what we were doing there, while his companion yelled "Shoot them in the head! Shoot them in the head!" He only let us pass after he made sure we weren't cops.

Things in Maré were supposed to change; the community was slated to get its own UPP unit this spring in time for the Olympics.

But last week the government slashed the country's security budget by more than 30 per cent.

Among the cuts: Maré's police force. Instead of having an embedded police station, the state will send in soldiers, as it did during the World Cup, to make sure there's no trouble during the Summer Games.

But as the military clamps down on the favelas, crime — like a balloon — rises elsewhere.

"Some of the members of these gangs are looking to recoup some of their profits by moving into property crime," says Muggah.

Muggers and thieves will be the most likely dangers for tourists. The favela of Santa Marta alone gets approximately 10,000 visitors a month; they expect that to double during the Games.

Even Dionisio — who may be Rio's most optimistic police officer — says he doesn't know which direction things will go.

"It'll be hard to tell what will happen," Dionisio says. "So because of that it's necessary to continue the work. It's a thing that you don't stop."