Divided Brazilians protest for president's permanent ouster — and her return

Thousands of demonstrators took to the streets in Brazil on Sunday, some calling for the permanent ouster of suspended President Dilma Rousseff and others demanding her return to office.

Thousands of demonstrators took to the streets in Brazil on Sunday, some calling for the permanent ouster of suspended President Dilma Rousseff and others demanding her return to office.

Rousseff was impeached and suspended in May for allegedly violating budget laws. A Senate trial on permanently removing her is expected in late August.

A few hundred people gathered on Rio de Janeiro's Copacabana beach Sunday to push for Rousseff's permanent removal. It's one of 11 states to see anti-Rousseff protests.

Those who rallied in Rio, some with Brazil's flag draped over their shoulders and nearly all wearing the national colours of yellow and green, chanted "Out Dilma! Out corruption!" 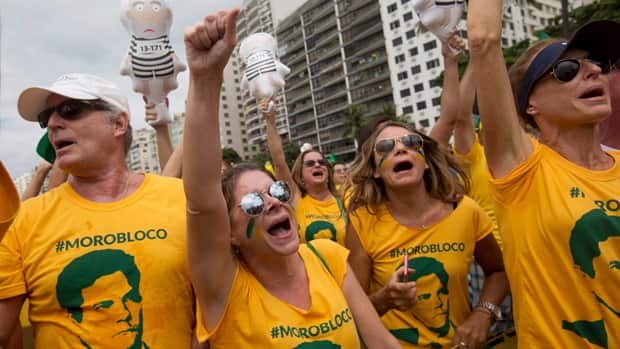 4 years agoVideo
1:01
Thousands of people against suspended President Dilma Rousseff took to the streets across the country Sunday 1:01

Those same messages were written in English on banners for the foreign tourists. Some 500,000 people are expected to visit Rio to attend South America's first Olympics between Aug. 5 and 21.

"This is a warm-up party, you might say, for us to keep the pressure on the Senate ... to show that the Brazilian people will not accept Dilma Rousseff remaining in power," said Carlos Carvalho, one of the organizers of the Rio protest.

Meanwhile, demonstrators in four states were denouncing acting President Michel Temer. He has recognized that he will likely be booed when he goes to the Games' opening on Friday, while Rousseff has said she will not attend.