Black lives, blue lives, all lives: What does it mean when we say certain lives matter?

The recent shooting of black men at the hands of police and the killings of law enforcement officers in response have reinstated complicated discussions about what it means when we say certain lives matter.

"Black Lives Matter" is a phrase that almost always fuels controversy and a wide range of heated reactions.

Supporters of Black Lives Matter consider it a movement and call to action against institutional racism experienced by black people. Others see the phrase and the concept as offensive because it does not express the importance of valuing all lives.

The recent shooting of black men at the hands of police, and the killings of law enforcement officers in response to those racialized attacks have reinstated complicated discussions about what it means when we say a certain group of lives matter.

A 'call to action'

Following the police shootings of Alton Sterling in Baton Rouge, La., and Philando Castile in St. Paul, Minn., thousands of Black Lives Matter supporters rallied across the U.S. to protest against police violence.

The movement began as a social media hashtag in 2013 following the shooting death in Florida of 17-year-old Trayvon Martin by neighbourhood watch volunteer George Zimmerman. It gained traction after the 2014 police shooting of Michael Brown in Ferguson, Mo.

Frank Leon Roberts, a professor-lecturer specializing in race and social movements at New York University, says Black Lives Matter is an "anti-violence movement that is attempting to end structural racism in all forms."

"Police brutality is one form of structural racism but there are other forms that Black Lives Matter is combating as well," Roberts told CBC News.

But there are many who do not see eye to eye with the message Black Lives Matter is attempting to send because they believe all lives are important, and specific groups should not be singled out.

Remigio Pereira of The Tenors replaced the lyrics to O Canada with "all lives matter" while performing at the Major League Baseball All-Star Game. He was heavily criticized for his decision to alter the anthem. 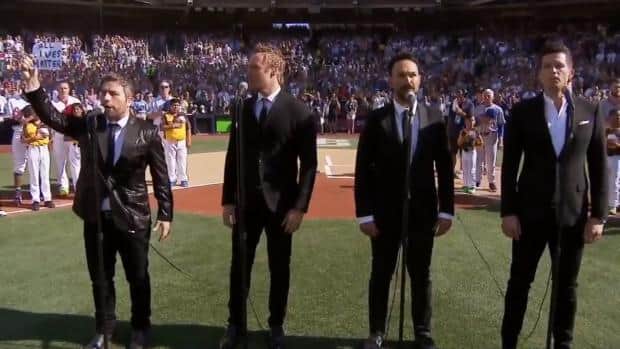 Pereira elaborated on his "all lives matter" lyric change in an an audio statement he released following his anthem performance.

"This country was built through diversity, exchanging ideas, exchanging cultures," he said. "That is how we move ahead in society. Not segregating everyone, not creating a hierarchy. Who can be higher than God? Not one person has the right over God's creation. And that's why everybody's life matters."

Pereira has since apologized for his actions.

Others have taken to social media to express why they think "all lives matter."

I believe that all lives matter, but it's kinda hard when people care more about themselves than the planet 🤔

I believe that all lives matter, and pray for those who feel otherwise

It appears many "all lives matter" supporters feel that "Black Lives Matter" is not about equality, but rather focusing on the oppression experienced by only one group.

Recently, Rudy Giuliani, the former mayor of New York City, went as far as to say that "Black Lives Matter" is "racist" during an appearance on Fox and Friends.

"It's inherently racist because, number one, it divides us. All lives matter," he said.

'All lives matter' is problematic

But critics of "all lives matter" believe it is an ignorant way of silencing the discrimination and racism faced by black people for centuries.

to all the people who keep saying all lives matter: <a href="https://t.co/BW7jVZmY71">pic.twitter.com/BW7jVZmY71</a>

Saying "all lives matter" is like crashing a funeral and yelling "WHAT ABOUT ALL THE OTHER PEOPLE WHO DIED?!?"

"The problem with "all lives matter" is not that it is untrue, but rather that it is only deployed rhetorically as a way of undermining or dismissing the concerns of Black Lives Matter," Roberts told CBC News.

Roberts says that "Black Lives Matter" is not rejecting that all lives are important.

Cicely-Belle Blain, co-founder of Vancouver's Black Lives Matter chapter, says the movement is not about black lives taking priority over other people.

"We all know that all lives matter. [We] are not saying black lives matter instead of white [or other lives]," she told CBC News.

On Twitter, people are using the hashtag  #AllLivesDidntMatter to point out what they believe is the hypocrisy of  the "all lives matter" message.The hashtag highlights that all lives, especially those of minorities, have not been a priority throughout history.

<a href="https://twitter.com/hashtag/AllLivesDidntMatter?src=hash">#AllLivesDidntMatter</a> from 1619 to the present day... aka from when the first slaves arrived to Jim Crow to our criminal justice system today

In the wake of the Dallas and Baton Rouge police shootings, many have expressed their support for police officers' lives using the online hashtag #BlueLivesMatter.

At the Republican National Convention, there was no shortage of "Blue Lives Matter" supporters.

"Ladies and gentlemen, I would like to make something very clear; Blue lives matter in America," Clarke told the crowd.

Lt. Randy Sutton, the U.S. national representative for Blue Lives Matter organization, told CBC News that the movement "came to be out of the sense of frustration that there was no one to speak for the police."

"Blue lives have always valued all lives. That is what cops do. They give their lives they risk their lives for people of every race, religion, ethnicity, social strata, regardless of all those things," Sutton said.

"Blue Lives Matter" is loaded with controversy as supporters of Black Lives Matter feel that it undermines the police violence against minorities while co-opting a hashtag that is meant to represent the struggles of black people.

"Well, there is no such thing as a blue life," Roberts said. "Blue refers to an occupation, not a racialized state of being which is what Black Lives Matter is calling attention to."

Blain said the issue with the Blue Lives Matter hashtag is that it compares a permanent racial identity to a job.

"[Being a police officer] is a job and being black is not. You can very easily remove your blue uniform at any time but you can't remove your blackness," she said.

"Police officers do not believe in prejudice and violence, and when you do and you espouse that view and you include violence in your rhetoric that reflects upon who you are as a human being and what your movement is all about."