Joe Biden, in the biggest speech of his long political life, accepted the Democratic nomination Thursday night and made clear his unequivocal and remarkably simple general-election message: He's a kinder human being than U.S. President Donald Trump.

Does empathy sway swing voters? Strategists think so. And it was the core of Joe Biden's convention message 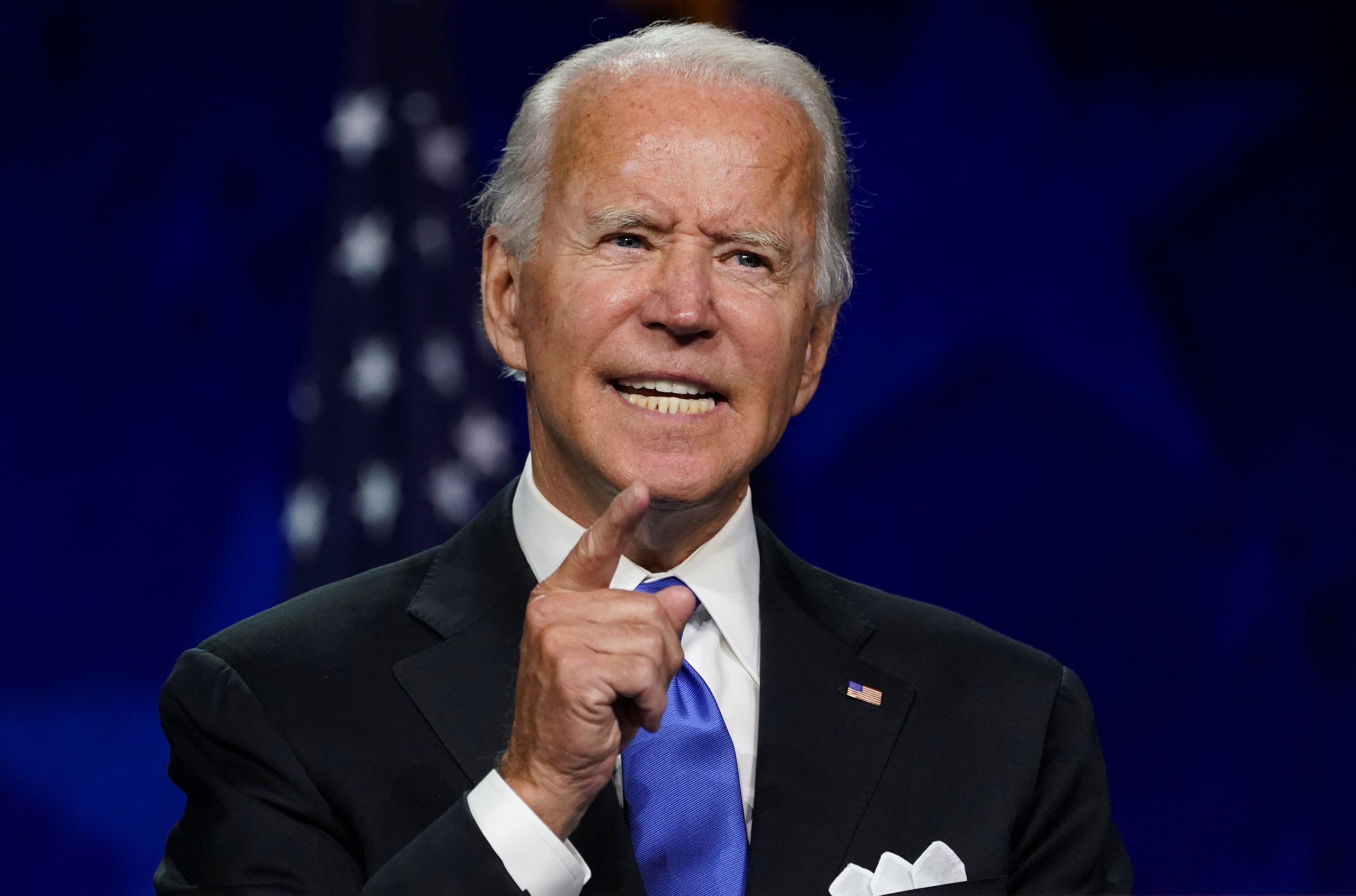 On the morning that Joe Biden gave the biggest speech of his long political life, a Democratic official shared an insight into winning over persuadable voters.

It's based on experience with swing-state voters in Wisconsin — the official estimates that about eight per cent of voters in his county, in one single election on one single day in 2018, voted simultaneously for Scott Walker, the evangelical and very conservative governor, and Tammy Baldwin, the very progressive and lesbian barrier-breaking U.S. senator.

Matt Mareno, the head of the Democratic Party in a large and historically conservative county near Milwaukee, called empathy an, erm, trump card in his county — for Baldwin in 2018 and for Biden in this year's presidential election.

"There's a bunch of voters out there who clearly value something that is not just policy," Mareno said in his party office in Waukesha County, a few hours before Biden's speech.

"I've sought out those voters. I talk to them. The thing I've heard a lot is it's a gut thing: '[Does that politician] care about me and my community?' They felt that Tammy [Baldwin] cared about them.

"If this election comes down to [that issue] — Joe Biden or Donald Trump? Hands down, it's Joe Biden."

Which brings us to Biden's first speech as Democratic nominee.

The presidential candidate who ran on a slogan derided by some as hokey, "Restoring the soul of the nation," doubled down on decency as his main election message.

His actual policy platform is slightly to the left of Barack Obama's on health care, climate change and infrastructure spending but is bemoaned by progressives as not nearly bold enough.

This was no policy seminar. The speech came following an evening of personal testimonials from people he'd been nice to.

They included a teenage boy who, like Biden, stutters, and who offered his endorsement while bravely soldiering through a speech before tens of millions of people.

Then came the nominee.

Biden's basic pledge, in summary, was to care about people including people who do dislike him as president.

"An ally of the light — not of the darkness," is how he described himself.

"While I will be a Democratic candidate, I will be an American president," he said.

"It's a moment that calls for hope and light and love. Hope for our futures, light to see our way forward, and love for one another." 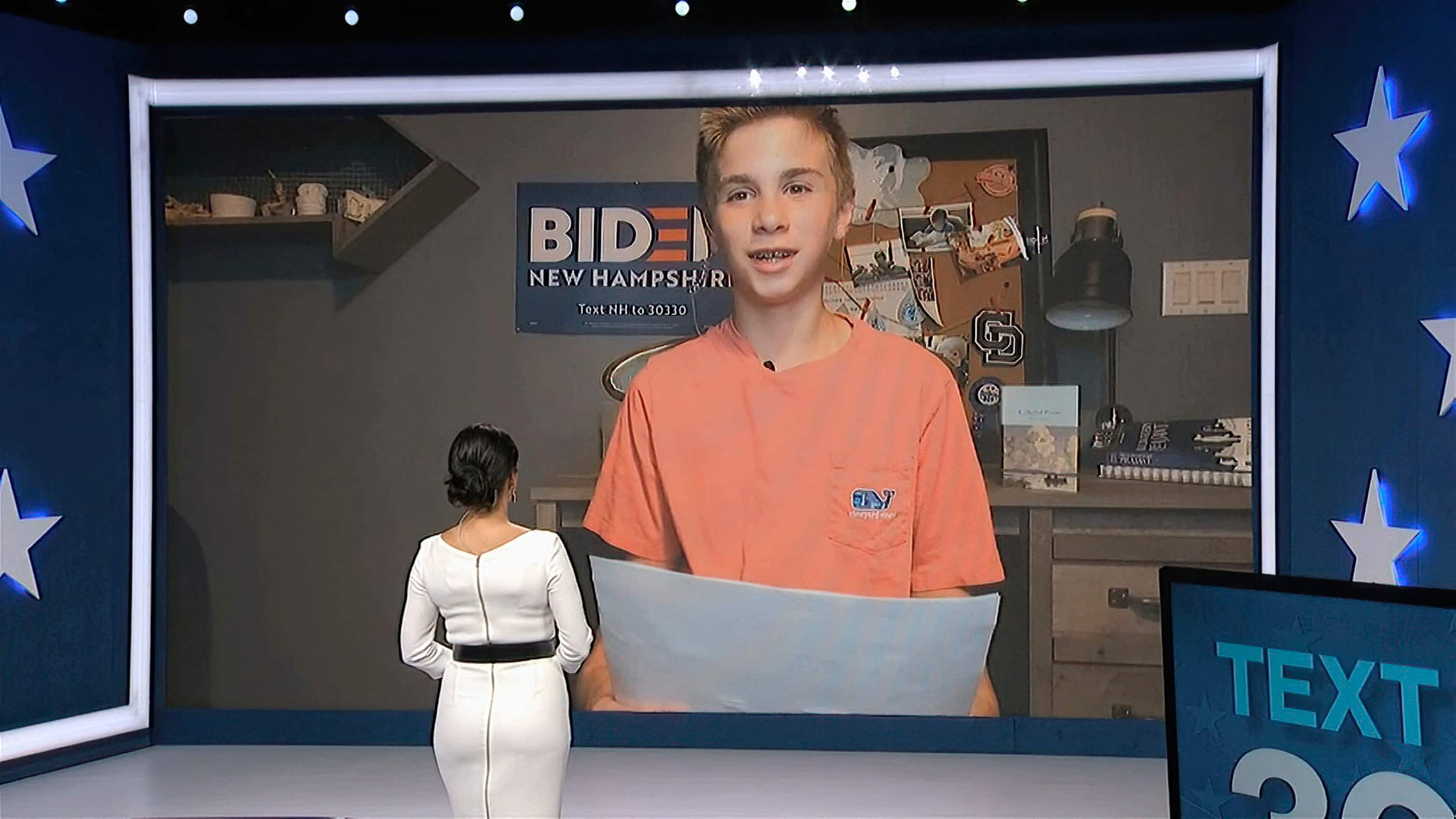 6 months ago
1:34
Brayden Harrington said Joe Biden's advice on managing his stutter gave him some confidence about something that's bothered the boy his whole life. 1:34

He contrasted that with the president. Trump retweeted someone a few days ago saying Democrat-supporting cities should be left to burn; this week he said nice things about a community of ever-evolving conspiracy theories described by the FBI as a domestic terror threat. Trump noted its supporters like him.

"He will wake up every day believing the job is all about him. Never about you," Biden said.

Insofar as there were substantive policy developments over these last few days, a significant one involved COVID-19.

Biden mentioned that Canada and other countries have fared better than the U.S. Perhaps the most attention-grabbing development was Biden's call for a national mask requirement during the pandemic.

Biden's stated rationale for that policy? Once again, empathy.

"We'll have a national mandate to wear a mask — not as a burden, but to protect each other," Biden said. "It's a patriotic duty."

That sets up a potential political trap for the president because the loudest voices on the right, and in online conspiracy groups, are already fuming over the mask idea.

But recent polling suggests a mask requirement is overwhelmingly popular with the American people including a majority of Republicans.

Another emotional highlight of the evening came when Biden's family handed the stage to his late son Beau, who appeared on an old video clip from a past party convention nominating his dad as vice-president.

Biden's relatives described him giving out his phone number to people who'd lost loved ones, like he has, with the deaths of his first wife and two children, and Biden in his speech described how pain can bring a sense of purpose in life.

'The deep, black hole' of pain

"I know that deep, black hole that opens up in your chest. That you feel your whole being is sucked into it. I know how mean and cruel and unfair life can be sometimes," Biden said.

"And we have a great purpose as a nation: To open the doors of opportunity to all Americans. To save our democracy. To be a light to the world once again."

Around this time, as Biden was speaking, the president was tweeting about his poll numbers, and about another speaker at the Democratic convention, Michael Bloomberg: "After the worst debate performance in the history of politics, Michael Bloomberg, commonly known as Mini Mike, is trying to make a comeback by begging the Democrats for relevance. They treated him like a dog — and always will. Before politics, he said GREAT things about me!"

Is kindness really a motivating issue for voters?

Sen. Bernie Sanders appears to think so. Even Sanders, who famously, and repeatedly, has made clear he detests the touchy-feely, personality-driven aspect of politics and favours a policy-driven focus, was on Biden's message.

"You have a human being who is empathetic, who is honest, who is decent," Sanders said of his primary rival, speaking earlier Thursday.

"My God, that is something this country needs."

Later, on CNN, the evening's Republican panellist, in reacting to Biden's speech, said the party still has a winning message this year: that the economy was on a roll, that it'll roll again, unless Democratic policies slow it down.

But that panellist, Scott Jennings, choked up at one point. He referred to the segment with the boy with a stutter, Brayden Harrington, and said it moved him as the father of a son with a learning difficulty.

"[Joe and Jill Biden] are clearly nice people," said the Republican TV surrogate. "They're good people. You can't argue that."

The Republicans hold their convention next week.