The dad of a boy with autism is seizing on the opportunity to debunk myths about the neurodevelopmental disorder and help others, after the British family's plight to find a new drinking cup for the 14-year-old went viral.

British family of Ben, 14, was desperate to replace the only blue cup he will use, and now he has hundreds 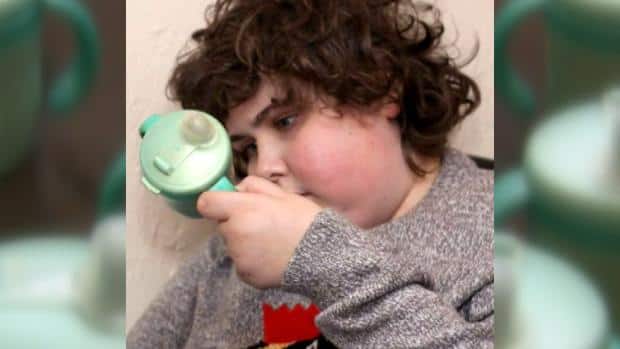 4 years ago
0:30
Dad reached out to social media after child refused to drink, became ill​ 0:30

Amid headlines about online harassment and dangerous conspiracy theories, it can be hard to remember that sometimes people use the internet for good.

Marc Carter learned that after he took to social media in a desperate bid to find an out-of-production blue sippy cup for his son Ben, who has autism.

Ben, 14, had been using the same cup since he was two years old, because he wouldn't drink from anything else. When the beloved cup fell apart a couple of years back, the family found a replacement through a friend.

"Ben is severely autistic and he has a severe learning disability. He's non-verbal, non-communicative, and he doesn't understand that he can use another cup," the father, who lives in the county of Devon in England, told CBC's As it Happens in November. "[We've] tried to change him and get Ben to accept something else … but Ben just won't."

Ben's replacement cup also is now on its last legs, and the manufacturer, Tommee Tippee, stopped making it over a decade ago.

The family then took to Twitter in hopes of finding someone with one.

His post went viral, and as of Friday morning, it had been retweeted more than 19,500 times.

"At one stage, I think I was getting 50 tweets a minute," he told As It Happens host Carol Off.

Not only did people all over the world send cups for Ben, but Tommee Tippee took notice. The company found an old mould at its Chinese factory and made Ben 500 cups.

But the story doesn't end there.

Switching Ben to a new cup has been a struggle.

"I've already tried to swap the base of his current cup," Marc Carter said. "Ben realized. He completely rejected his drink. Then we swapped it back. But, he wouldn't accept it. It took us nearly 24 hours to get him drinking again. That was scary.

"What we've agreed is that we'll slowly get him to a new cup."

Ben's dad is also using the attention he has received to spread awareness about autism and help other families dealing with similar situations.

He's raising money on GoFundMe to make a documentary about Ben, and talking to reporters about the reality of autism.

One myth he wants to debunk is that all people with the neurodevelopmental disorder are savants, as depicted in the 1988 film Rain Man, in which Dustin Hoffman played a mathematical genius with autism.

"People ask, 'What does [Ben] do really well?' I say, 'He can drink a glass of squash really fast!'" Carter recently told iNews in the U.K.

As he explained in a recent YouTube video, he's working on a website, LittleBlueCup.org, that other families can turn to to seek the resources they need.

"Really important to me is that people out there can put on [the website] their little blue cup need, whether that be a bottle or a teddy, a cup, a blanket, whatever it be."