The embattled Belarus president tried to put on a show of strength Sunday, holding a rally of supporters and rejecting any possibility of repeating the vote that gave him a sixth term. But opponents countered with a far larger demonstration that attracted as many as 200,000 people.

The embattled president of Belarus tried to put on a show of strength Sunday, holding a rally with tens of thousands of supporters and rejecting any possibility of repeating the vote that gave him a sixth term. But opponents countered with a far larger demonstration that attracted as many as 200,000 people.

Alexander Lukashenko, who has ruled the former Soviet republic of 9.5 million since 1994, lashed out at the West and declared to his crowd that the country would "perish as a state" if the election were rerun.

About 50,000 people listened to Lukashenko in a square near the main government building in the capital of Minsk. But as he spoke, throngs of supporters streamed to their own rally about 2.5 kilometres away. It was the eighth straight day of anti-government demonstrations.

During 26 years in office, Lukashenko has repressed opposition figures and independent news media. But this year, protesters fed up with the country's declining living standards and Lukashenko's dismissal of the coronavirus pandemic have posed the biggest challenge to his rule.

The 65-year-old president claimed Sunday that Western powers were gathering military units in countries along Belarus' western borders and denounced suggestions by some Western nations that Belarus should repeat the Aug. 9 presidential vote, which opposition supporters say gave Lukashenko a victory only through massive fraud. Official results say he received 80 per cent of the vote. 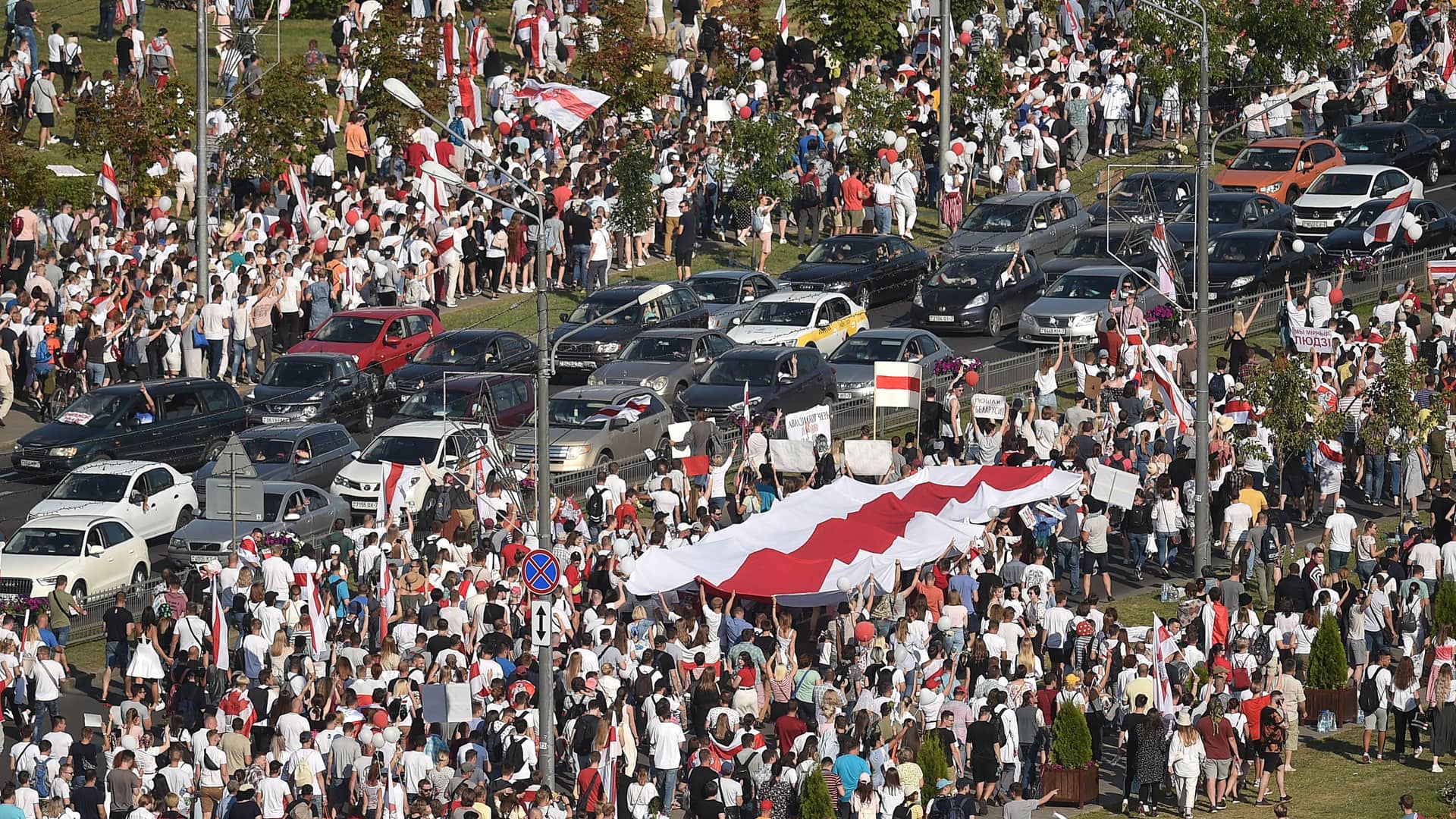 7 months ago
3:28
Thousands of demonstrators gathered in Minsk in opposing rallies for and against Belarus President Alexander Lukashenko. 3:28

"If we follow their lead [and rerun the election], we will perish as a state," Lukashenko declared, a day after saying he and Russian President Vladimir Putin had agreed that Russia would send unspecified security assistance to the former Soviet republic if Lukashenko asked for it.

NATO spokesperson Oana Lungescu dismissed the president's claim about troops gathering, tweeting that there is no NATO buildup in the region.

"NATO's multinational presence in the eastern part of the Alliance is not a threat to any country," Lungescu said. "It's strictly defensive, proportionate & designed to prevent conflict & preserve peace."

The Collective Treaty Security Organization, a military alliance of six former Soviet states including Belarus, said Sunday it would make a decision about providing assistance if Belarus requested it.

Thousands have been arrested at the post-election protests, which police tried to put down with clubs, rubber bullets and flash grenades. When many detainees were later released, they showed extensive bruises they said were due to police beatings. Some protesters carried pictures of loved ones they said had been beaten so badly that they could not attend.

As Lukashenko's supporters waited for his appearance Sunday, many chanted his nickname of "Batka," or "father."

They also chanted "Maidan won't take place," referring to the months of protests in Ukraine in 2013 and 2014 that drove then-President Viktor Yanukovych to flee the country. Shortly after Yanukovych's departure, Putin then moved to annex the entire Crimea Peninsula from Ukraine, claiming a huge swath of its Black Sea coast for Russia.

"Now everybody is against Lukashenko, and the president needs our support. Everybody suddenly has forgotten the good things he has done — there's order in the country, we don't have war or hunger," said supporter Tamara Yurshevich, a 35-year-old lawyer.

As Lukashenko spoke, throngs of opponents converged on a park about 2.5 kilometres. In the late afternoon, they streamed into the square vacated by Lukashenko supporters.

In contrast to the first days of protest when large contingents of police and special forces were deployed against protesters, police appeared to be all but absent when the opposition supporters entered the square. The gathering ended peacefully about three hours later. There were no official figures on crowd size, but some reports estimated it at about 200,000.

Protesters were thrilled by the turnout Sunday, and many felt they had momentum.

"The result of the election is on the streets and squares of Belarus today — it's a sea of people who will never agree to live as before with Lukashenko," said Feliks Zharikov, an engineer who came with his wife and son.

"Suddenly, the mood in society changed and everyone suddenly understood that Lukashenko lost," said Anna Trushevich, a university biology instructor.

European Union foreign ministers have rejected the election results and on Friday began drawing up a list of officials in Belarus who could face sanctions. If Lukashenko were to resume a harsh crackdown, the response from the West could be even stronger.

WATCH | Russia may step in as Belarus protests escalate: 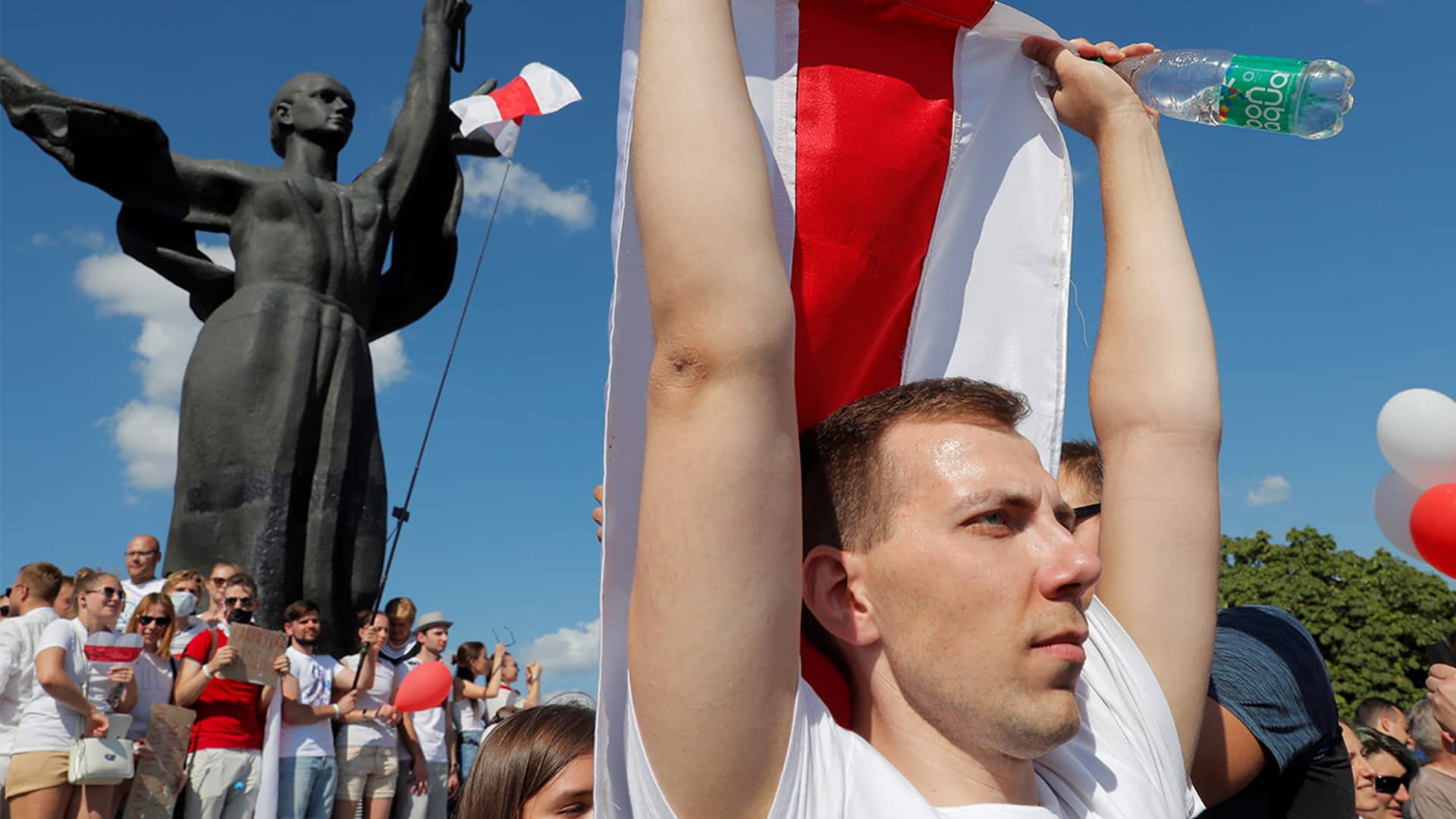 Russia may step in as Belarus protests escalate

7 months ago
2:10
Sunday saw the biggest protest yet in the capital of Belarus, one week after an election that many voters say was rigged. The key question now is how Russia's President Vladimir Putin may respond, and what that would mean for Belarus. 2:10

But calling on Russia for military help is also perilous. Although Russia and Belarus agreed in 1997 to a close union, Lukashenko frequently claims that his giant neighbour aims to absorb Belarus entirely. In the run-up to the election, Belarus arrested 33 Russian private military contractors whom it claimed had been sent in to destabilize the country.

On Sunday, a video circulated on YouTube that purported to show Belarus's ambassador to Slovakia, Igor Leshchenya, expressing "solidarity with those who came out on the streets of Belarusian cities with peaceful marches so that their voice could be heard."

The embassy could not be reached for comment, but Slovakia Foreign Minister Ivan Korcok indicated the video was legitimate. It would be the first indication of dissent at a high level of government.

"We have noted the strong statement of the Belarusian Ambassador to Slovakia. It confirms our assessment of current situation in Belarus. This is a clear signal from a senior Belarusian diplomat who courageously supports his fellow citizens," he said on Twitter.