What we know about the suspected Barcelona, Cambrils attackers

Catalan police released the photos and names of four people Friday suspected of being connected to the deadly attacks in Barcelona and Cambrils, but a full picture of exactly how they were connected and how many of them were among the attackers killed in a shootout with police in Cambrils was still emerging.

The man who drove a van into crowds in a busy part of Barcelona, killing 13 people and injuring dozens, may not have been among the suspects killed by police after a second vehicle attack in Cambrils, a seaside resort on the Mediterranean.

Catalan police have not confirmed the media reports but said it was possible the driver was among the five suspects killed in a shootout with police in Cambrils after a car plowed into pedestrians on the town's boardwalk, killing at least one person and wounding six others, including a police officer.

As of Friday, police had arrested three people in the town of Ripoll and one person in Alcanar, where a gas explosion Wednesday in a house was being investigated in connection with the Thursday's attacks.

All but Abouyaaqoub were among the five killed in Cambrils. Police were still searching for Abouyaaqoub.

Spanish media reported Saturday that Abouyaaqoub is now thought to be the van's driver, but neither police nor other officials would confirm the reports.

All four of the suspects identified are of Moroccan origin and from the small city of Ripoll about 100 km north of Barcelona near the Pyrenees mountains and Spain's border with France, according to a court document released by police.

On Saturday, the families of those men arrived as a group in Ripoll's town square and denounced terrorism, with mothers and sisters insisting they did not know what had happened to their sons and brothers.

Police raided an apartment in Ripoll on Friday that had been occupied by Abdelbaki Es Satty, according to a search warrant seen by Reuters. Neighbours said he was an imam, a Muslim prayer leader. His landlord said he had last been seen on Tuesday.

Saturday evening, a police official told The Associated Press Es Satty is believed to have been killed in the Wednesday explosion in Alcanar that has been linked to the attacks.

Shortly after the attacks, multiple reports identified Oukabir as the driver of the van. According to the document, Oukabir was born in Ripoll but also holds Moroccan citizenship, a police union official said. The other three men were born in Morocco but have Spanish residency.

Spanish public broadcaster RTVE reported that Oukabir's older brother, Driss Oukabir, a 27-year-old French citizen of Moroccan origin, went to police in Ripoll to report that his identity documents had been stolen.

Various Spanish media said identification documents with his name were found in the van and that he claimed his brother might have stolen them.

A resident of Ripoll who spoke with CBC News Thursday night and did not want to be identified said she has known the Oukabirs for 10 years and that several members of the family live in Ripoll. She described the family as friendly and open.

She said Driss Oukabir grew up in Ripoll and studied at Institut Abat Oliba de Ripoll. She said Oukabir previously had legal troubles, including arrests for dealing drugs and time in Figueres jail. Oukabir's criminal history was also reported in local media. 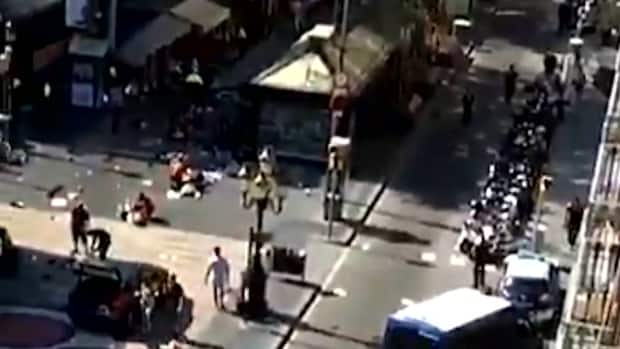 3 years ago
0:58
Multiple deaths and police searching for suspects after apparent terror attack 0:58

She said her own brother hung out with Moussa Oubakir and three other boys, going to restaurants and the movies. Over the last two years, however, the group had been losing touch with Moussa, the source said.

"Normally, when something like this happens, you don' know the people, so it doesn't seem so important," she said, "but this time, it really hurts."

Ripoll continued to be the focus of at least part of the investigation into the attacks, with a heavy police presence in the town on Friday.

"There could be more people in Ripoll connected to the group," Joaquim Forn, Catalonia's interior minister, told TV3 television.