Former White House adviser Steve Bannon was arrested Thursday and pleaded not guilty to charges that he and three others ripped off donors to an online scheme ostensibly raising funds for U.S. President Donald Trump's wall on the Mexico-U.S. border.

Bannon, 66, was arrested on Thursday to charges in relation to border wall fundraising scheme

Former White House adviser Steve Bannon pleaded not guilty to charges that he ripped off donors to an online fundraising scheme "We Build The Wall," involving three others.

The charges were contained in an indictment unsealed in Manhattan federal court that alleged Bannon received more than $1 million US himself, using some to secretly pay a co-defendant, Brian Kolfage, and to cover hundreds of thousands of dollars of Bannon's personal expenses.

Federal prosecutors alleged that Bannon and three others "orchestrated a scheme to defraud hundreds of thousands of donors" in connection with an online crowdfunding campaign that raised more than $25 million to build a wall along the southern border of the United States.

In addition to Bannon, three others were charged with playing a role in the scheme: Kolfage, 38; Andrew Badolato, 56; and Timothy Shea, 49.

No knowledge of project, says Trump

Bannon served as adviser to Donald Trump's administration until August 2017, almost exactly a year after he had assumed the role of Trump campaign chair.

Trump at the White House on Thursday told reporters he was surprised at the development and had no knowledge of the project.

"Well, I feel very badly," he said. "I haven't been dealing with him for a long period of time."

Bannon has been credited with helping turn around a campaign that was struggling in the polls against Hillary Clinton and employing a no-holds barred approach.

After Trump was damaged by the revelation of an Access Hollywood tape in which he bragged about sexually assaulting women, Bannon was said to have arranged a session two days later on the eve of a presidential debate in which four women reprised allegations against former president Bill Clinton of sexual assault and sexual misconduct.

Bannon, along with former senator Jeff Sessions and former Sessions aide Stephen Miller, have been described as helping formulate what would become a hardline immigration stance from the Trump administration. All three joined the administration, but only Miller remains, as an adviser.

Bannon was taken into custody by the postal inspection service on a 150-foot luxury yacht called Lady May, which was off the coast of Connecticut, authorities said.

Neither Bannon, nor his spokeswoman or attorney responded to requests for comment Thursday. Kolfage did not respond either.

Attorney General William Barr told The Associated Press he had been made aware of the investigation into Bannon months ago but did not say whether the president had been informed.

According to the indictment, Bannon promised that 100 per cent of the donated money would be used for the project, but the defendants collectively used hundreds of thousands of dollars in a manner inconsistent with the organization's public representations.

The indictment said they faked invoices and created sham "vendor" arrangements, among other ways, to hide what was really happening.

"It's not possible to steal the money," Bannon's co-defendant Kolfage once said publicly, according to the indictment. "I can't touch that money. It's not for me."

Read details of the indictment:

An immigration plan unveiled by Trump last year had included a proposal to allow public donations to pay for his long-promised southern border wall. At that point, the GoFundMe campaign launched by war veteran Kolfage had raised more than $20 million for wall construction.

We Build the Wall, launched on Dec. 17, 2018, originally promoted a project for three miles (close to five km) of fence posts in South Texas that was ultimately built and largely funded by Fisher Industries, which has received about $2 billion in funding for wall contracts. Tommy Fisher, CEO, didn't respond to calls for comment.

Construction faced resistance by local authorities in New Mexico and Texas and accusations of improper permitting. In May, federal officials found that a section of Fisher's privately-funded wall violated flood construction standards along the Rio Grande. It also caused erosion.

Trump recently criticized that section of wall after it showed signs of erosion, saying it was "only done to make me look bad," even though it was built by his supporters.

"I know nothing about the project other than when I read about it, I didn't like it," Trump said on Thursday. "I said, 'This is for government; this isn't for private people.' I didn't like it. It was showboating and maybe for looking for funds."

2nd ex-campaign chair to be charged

After a career in the navy and then in finance, Bannon rose to political prominence through Breitbart.com, especially after the 2012 death of Andrew Breitbart.

As executive editor, Bannon helped direct coverage at the conservative outlet to focus on criticizing Republicans seen as too moderate on fiscal policy and immigration, as well as stories on crimes committed by those in the U.S. illegally.

For a time, Trump continued to praise Bannon after he left the White House in August 2017 but soon grew angered by the ex-adviser's willingness to talk to reporters about the first six months of the administration. 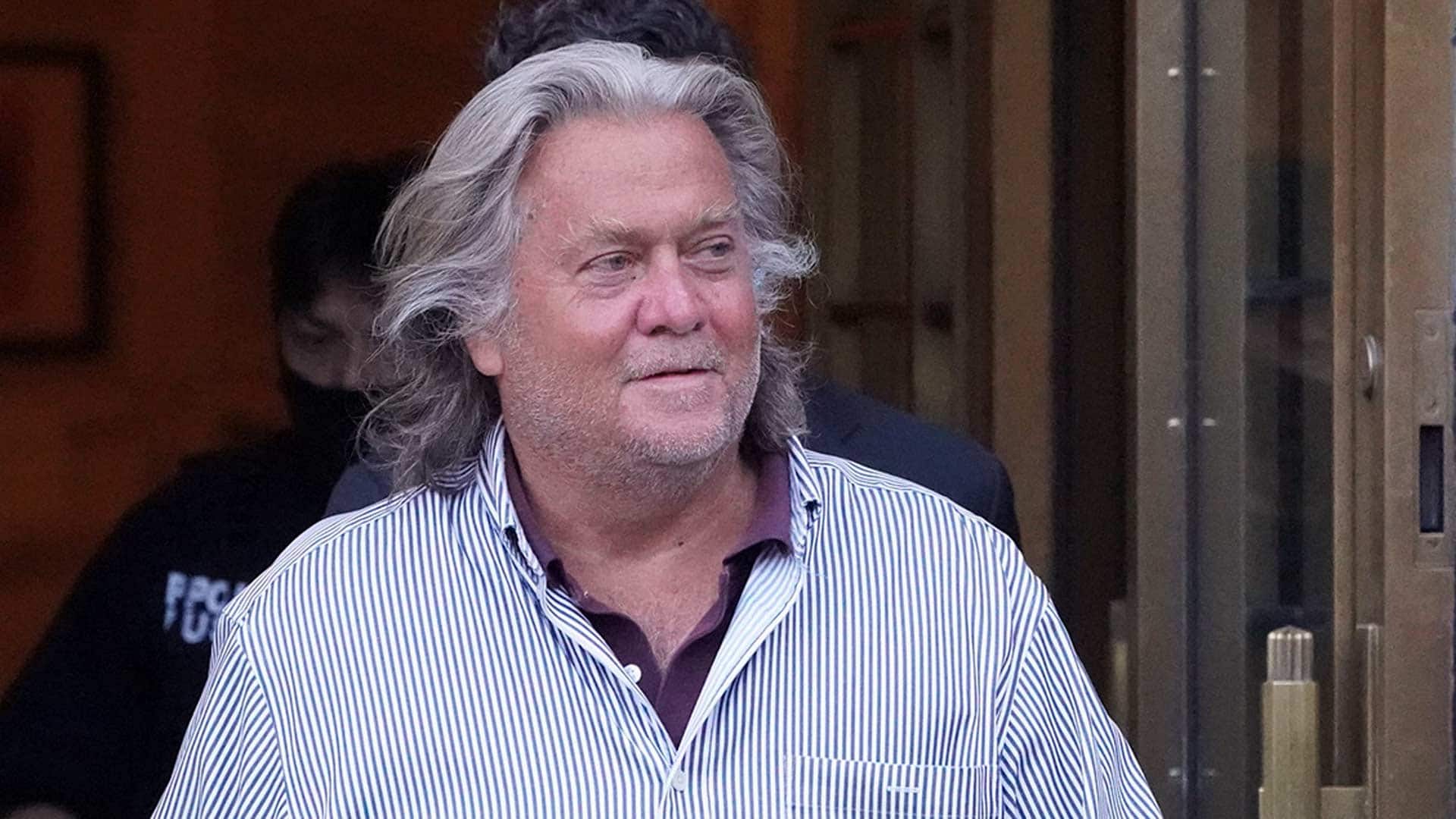 5 months agoVideo
1:57
Steve Bannon, a former adviser to U.S. President Donald Trump, has been charged with fraud and money laundering. He and three others are accused of pocketing hundreds of thousands of dollars donated to his We Build the Wall fundraiser. 1:57

Bannon returned to Breitbart for a time but more recently has focused on efforts to establish a Catholic academy with a political orientation at an 800-year-old monastery in Italy.

Bannon is the second former Trump campaign chair to be charged criminally. Bannon as campaign chair succeeded Paul Manafort, who is currently serving a sentence for an assortment of bank fraud and witness tampering charges in home confinement due to COVID-19.

The final report from the Republican-led Senate intelligence panel released this week laid out a series of extensive contacts between Manafort and at least two men close to the Kremlin.

Manafort has been accused of sharing polling data with one of the men, and lying to both the FBI and investigators from special counsel Robert Mueller's team.

NBC News, the Los Angeles Times and the Washington Post each reported this week that Bannon was among a small number of individuals recommended by the Senate panel for a criminal referral for potentially misleading special counsel investigators.

It is not clear if that referral was ever followed up on by federal investigators.