Former White House strategist Steve Bannon has stepped down from Breitbart News, where he served as executive chairman since 2012, the company has announced.

Breitbart announced Tuesday that Bannon would step down as executive chairman of the conservative news site, less than a week after Bannon's explosive criticisms of Trump and his family were published in a new book.

A report on the Breitbart website quotes Bannon saying, "I'm proud of what the Breitbart team has accomplished in so short a period of time in building out a world-class news platform."

Trump lashed out at Bannon for comments made in Michael Wolff's Fire and Fury: Inside the Trump White House, which questions the president's fitness for office. As Trump aides called him disloyal and disgraceful, the president branded his former chief strategist on Twitter as "Sloppy Steve," an apparent reference to Bannon's often unkempt appearance, and declared that "he lost his mind" when he was pushed out of the White House last August.

The president was livid about Bannon's remarks — not just at the insults about his family, but also at his former strategist's apparent intent to take credit for Trump's election victory and political movement, according to a White House official and two outside advisers not authorized to speak publicly about internal conversations.

After days of silence amid withering criticism from his former colleagues and his largest benefactor, Bannon tried to make amends. He issued a statement Sunday praising the president's eldest son, Donald Trump Jr., whom he was quoted accusing of treasonous behaviour in the book. Bannon did not apologize for his criticism of the president's daughter and son-in-law, Ivanka Trump and Jared Kushner, with whom he had squabbled inside the West Wing.

Bannon's departure from Breitbart came as a shock to some of his allies. One said Bannon was telling people as recently as Monday that he expected to stay on.

Bannon's breakup with Breitbart is also costing him his daily show on the conservative talk station on satellite radio network SiriusXM. The company announced it is ending its relationship with Bannon, stating its programing agreement is with Breitbart.

Inside the White House, Bannon was viewed as the keeper of Trump's nationalistic flame, charting the progress on the president's promises to his base on dry erase boards in his office. But Bannon was marginalized in the months before his ouster over Trump's concerns that the top aide was being viewed as an Oval Office puppeteer.

Trump had stayed in touch with the Breitbart head after he left the White House in August, including consulting him on last month's Alabama Senate race. But since Bannon's quotes in the Wolff book emerged, the White House began sending Republicans and conservative figures a clear message: Trump or Bannon. 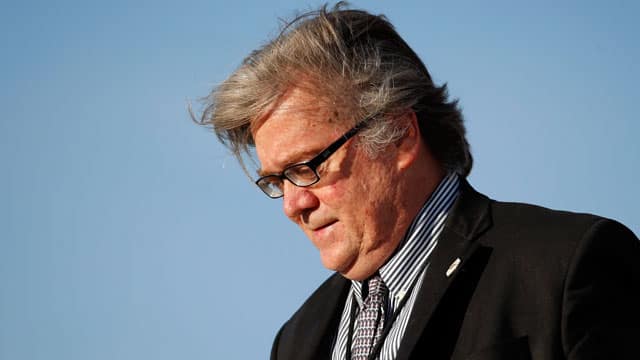 3 years ago
3:14
Steve Bannon has left Breitbart News as its executive chairman. Bannon's departure is the latest chapter in a tumultuous year. Once considered one of the driving forces behind U.S. President Donald Trump's strategy, Bannon used Breitbart to push the president's message. Now it appears he no longer has the support of either the president or the news outlet he led 3:14

The chief strategist had lost many allies in the West Wing after chief of staff John Kelly's staff shakeup and was blamed for some of the infighting that had paralyzed the White House. Some West Wing aides in recent days had made little effort to hide their happiness that Bannon had suffered such a public rebuke.

The White House did not immediately respond to the news of Bannon's ouster, but press secretary Sarah Huckabee Sanders last week called on the conservative site — which has been a steadfast backer of the president — to "look at and consider" parting ways with Bannon.

Despite the setback, Bannon has told confidants that he believes Trump, after a cooling-off period, will again seek his counsel, noting that the president often maintains contact with aides he has fired. But some Trump allies hope the president will permanently cut off his former strategist, and the fate of Bannon's insurgency against the Republican establishment is now in doubt.

On Monday, deputy press secretary Hogan Gidley said Bannon's apology did not alter his standing with the president. "I don't believe there's any way back for Mr. Bannon at this point," Gidley said.