Canadian rider Hawley Bennett-Awad was thrown from her horse and injured during the cross-country portion of an equestrian event at the London Olympics. 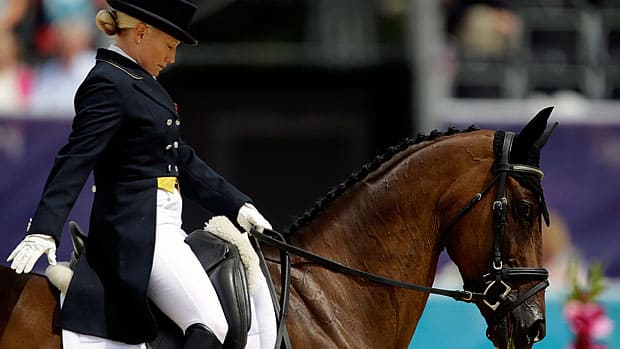 8 years ago
2:18
A B.C. Olympian is in hospital after falling during an equestrian event in London 2:18

Canadian rider Hawley Bennett-Awad was thrown from her horse and injured during the cross-country portion of an equestrian event at the London Olympics on Monday.

Bennett-Awad, 35, from Murrayville, B.C., was transported to hospital by an ambulance and admitted for observation and pain management, according to a release from the Canadian Olympic Committee.

"Bennett-Awad suffered a concussion, which is improving significantly. She also suffered a stable sacral fracture," Michael Gallagher, president of Equine Canada, said in the release. A sacral fracture is a break in the sacrum, a large, triangular bone at the base of the spine.

On Tuesday, the Canadian Olympic team's chief doctor examined Bennett-Awad and said her condition had improved. It is ancitipated the athlete will leave Royal London Hospital by Wednesday.

Bennett-Awad fell at the third fence, reported the CBC’s Heather Hiscox from London for News Network. The fence incorporates musical notes in its structure and commentators said it had the potential to be distracting to a horse.

Peter Barry of Dunham, Que., also fell from his horse, Kilrodan Abbott, and did not finish, although he wasn't hurt.

Bennett-Awad and Barry were among a half-dozen riders who fell from their mounts during the 5.7-kilometre course up and down the hills of Greenwich Park.

The cross-country segment of the three-discipline competition is designed to test the endurance and guts of the horse and rider. There are razor-sharp turns, blind two-metre drops and tricky combination jumps.

Before the Olympics began, Bennett-Awad told the Vancouver Sun that her horse, Gin and Juice, had a history of bucking and had already sent her to hospital three times.

Gin and Juice is named after a Snoop Dogg song.