Australia urged nearly a quarter of a million people to evacuate their homes on Friday and prepared military backup as authorities said the next few hours could be "very, very challenging" even as rain poured down in some parts.

27 people have been killed and 103,000 square kilometres of land burned

Australia urged nearly a quarter of a million people to evacuate their homes on Friday and prepared military backup as authorities said the next few hours could be "very, very challenging" even as rain poured down in some parts.

"Even with rain in Melbourne, even with forecast better conditions next week, there is a long way to go in what has been an unprecedented fire event ... and, of course, we know that we have many weeks of the fire season to run," Daniel Andrews, the premier of Victoria, told a televised briefing.

"The next few hours are going to be very, very challenging."

While the winds are expected to move through by Saturday morning, Andrews urged residents to stay on high alert and leave the community "if you are told to."

At midnight, 1 fire is at Emergency Warning, 5 at Watch and Act. 147 fires burning in NSW, 67 to be contained. The southerly change continues to move through parts of NSW, brining strong and gusty winds. Residents should monitor the situation as the change moves through <a href="https://twitter.com/hashtag/nswrfs?src=hash&amp;ref_src=twsrc%5Etfw">#nswrfs</a> <a href="https://t.co/g7QiSHOJeF">pic.twitter.com/g7QiSHOJeF</a>

Authorities sent emergency texts to 240,000 people in Victoria, telling them to leave. People in high-risk regions in New South Wales (NSW) and South Australia were also urged to think about leaving, but officials did not say how many.

Since October, 27 people have been killed and thousands subjected to repeat evacuations as huge and unpredictable fires scorched more than 103,000 square kilometres of land, an area roughly twice the size of Nova Scotia.

In the coastal town of Eden in New South Wales, where the alert status was upgraded to "watch and act" on Friday evening, smoke filled the horizon as winds blew smoke and ash.

Shereen and Kim Green, who live on a farm with three houses and 50 cattle just outside Eden, were racing to fill two 1,000-litre tanks of water.

"This is to put out the spot fires, and we'll be staying up all night to defend our property," said Shereen, as the wind shook her utility vehicle. "We're taking the opportunity while we can."

Sitting under the town's watchtower, resident Robyn Malcolm said: "If it all goes wrong, we'll dash down to the wharf and get on a tugboat."

Key facts of the crisis:

Also on Friday, thousands of Australians took to the streets to protest government inaction on climate change.

The bushfire crisis has added pressure on Morrison's conservative government to do more to combat climate change after Australia weakened its commitment to the Paris climate accord last year.

Major roads in Sydney were blocked as protesters chanted "ScoMo has got to go," referring to Morrison, while others held posters that read "There is no climate B" and "Save us from hell." 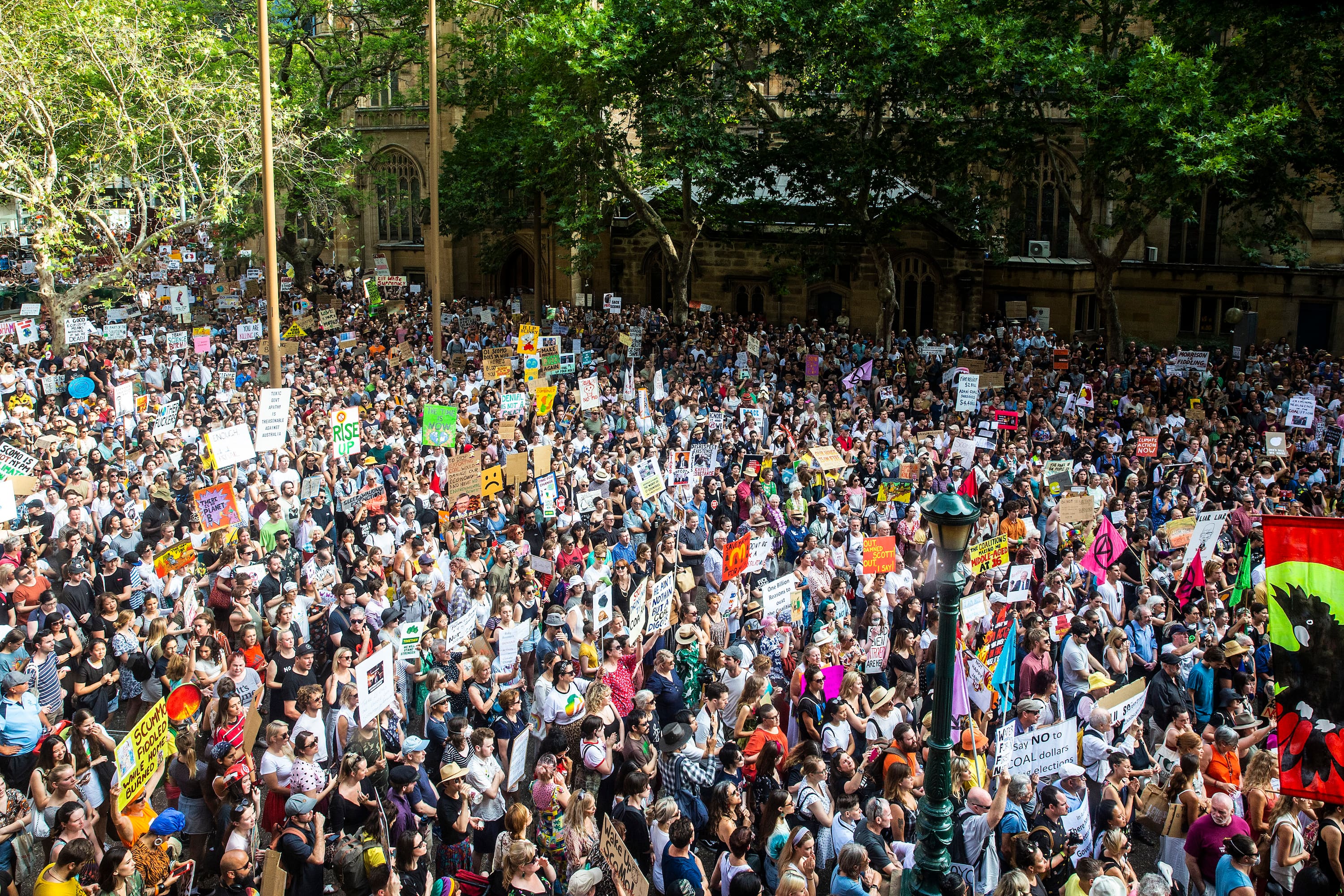 10 months ago
1:51
Thousands of Australians took to the streets on Friday to protest against government inaction on climate change, as bushfires ravage large swathes of the country, incinerating wildlife and polluting the air. 1:51

There were similar protests in the capital Canberra and Melbourne, where air quality turned so noxious this month that the two cities featured among places with the most polluted air on Earth.

In Melbourne, huge crowds braved heavy rain and a sharp drop in temperature to come out with placards bearing messages like "Phase out fossil fools," "Fire ScoMo" and "Make fossil fuels history."

But Morrison has repeatedly rejected any criticism that his government is not doing enough. On Friday, he told Sydney radio 2GB that it was disappointing that people were conflating the bushfire crisis with Australia's emission reduction targets.

'Our country is burning'

"Common sense tells you that there are other times to make your point," he told a televised briefing.

"I respect people's right to have a view, I tend to agree with a lot of the points that are being made — climate change is real — but there is a time and a place for everything, and I just don't think a protest tonight was the appropriate thing."

Teacher Denise Lavell said she attended the protests in Sydney because she believed the pleas were only a tactic to keep people from protesting.

"Our country is burning, our planet is dying, and we need to show up," she told Reuters.

Climate scientists have warned the frequency and intensity of the fires will surge as Australia becomes hotter and drier.

Australia has warmed by about 1 degree Celsius since records began in 1910, NASA climate scientist Kate Marvel said this week.

"This makes heat waves and fires more likely," she said on Twitter. "There is no explanation for this — none — that makes sense, besides emissions of heat-trapping gases." 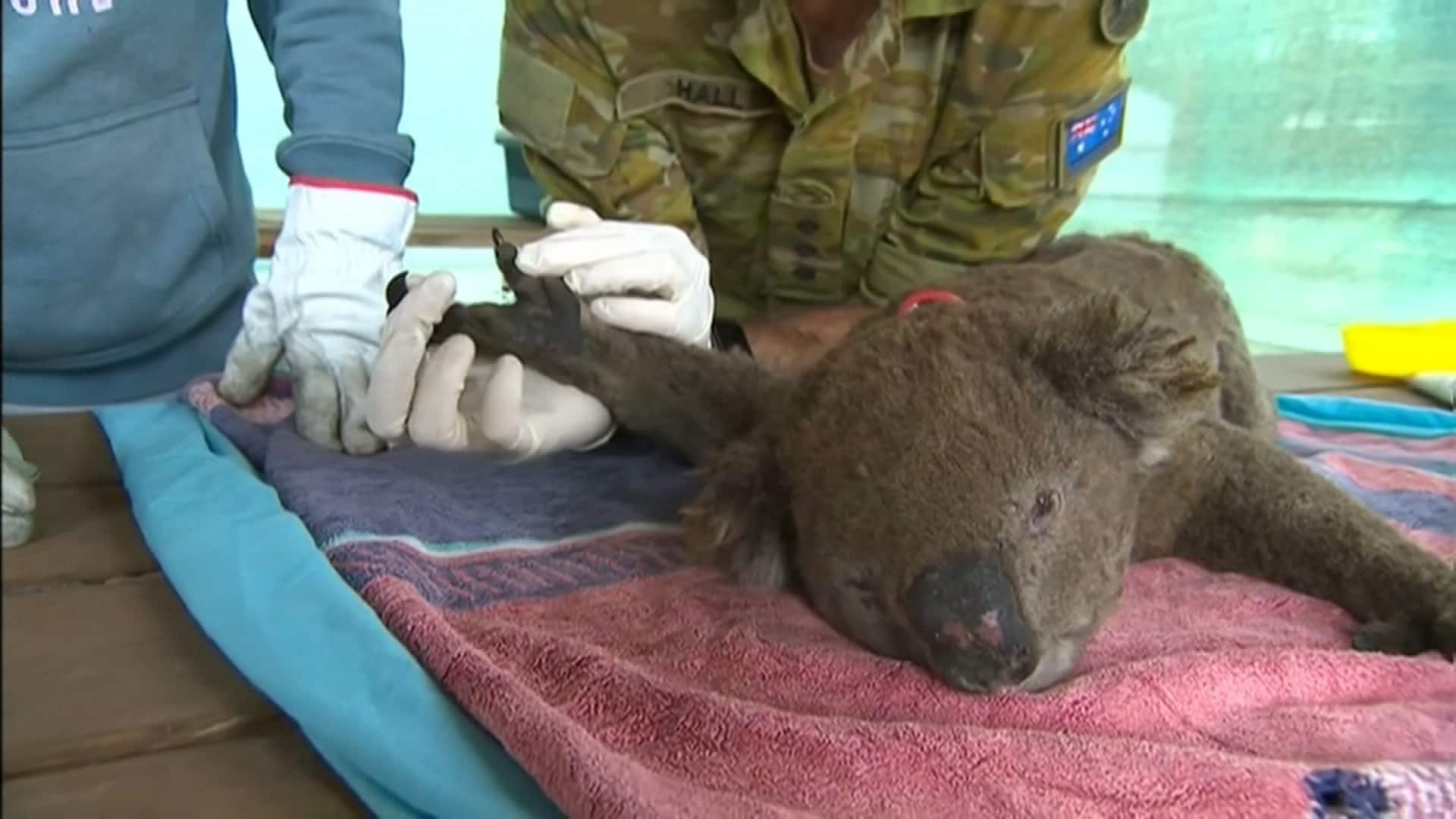 10 months ago
0:59
Veterinary workers in Australia have their hands full trying to save koalas with burns and other injuries 0:59
CBC's Journalistic Standards and Practices|About CBC News