75 years after Auschwitz liberation, anti-Semitism on the rise in Germany

As the world remembers more than a million people who died at Auschwitz, the vast majority of them Jews, a survey conducted for the World Jewish Congress says one in four Germans harbours some form of anti-Semitic belief.

'We will be on the brink of catastrophe sooner than we can imagine,' says famous pianist

At the age of 32, Igor Levit is already a pianist of world renown and acclaim.

But last November, he drew the world's attention for far less benign reasons when he started receiving death threats.

"They came through via mail, but clearly they had an anti-Semitic tone," Levit said sitting in front of a half-covered grand piano in his sunny Berlin home.

The threats were taken seriously enough for him to have to perform some of his concerts under tight security.

"Now it's cheap to threaten a human being," he said. "You don't even need to go to the post office and put a stamp on your envelope. No, all you need to do is press down the button on your phone and boom, it's out there."

If anything, the threat prompted Levit to speak out about his country — and his fears for it against a backdrop of intolerance in all its forms. Anti-Semitism is on the rise in Germany.

A survey conducted for the World Jewish Congress published in December found one in four Germans harbouring some form of anti-Semitic belief. And Germany's interior ministry recorded a 20 per cent rise in anti- Semitic attacks, most attributed to the far right.

"If we continue to allow our society to be poisoned, we will be on the brink of catastrophe sooner than we can imagine," said Levit.

In October, a far-right extremist tried to shoot his way into a synagogue in the East German town of Halle, killing two bystanders. It followed the murder by a suspected neo-Nazi of a German politician outspoken for his support of refugees.

So concerned has the German government become, that in April it appointed a Commissioner for Jewish Life in Germany and the fight against anti-Semitism.

Felix Klein says he is particularly worried by anti-Semitism's rise in every day language.

"In the middle of society, you know?" he said. "When you go to the football stadium, on the underground, in restaurants where people work, people say things about Jews. Negative things."

That this is happening as the world remembers the liberation of Auschwitz 75 years ago, and the more than one million who perished there, makes it all the more startling.

"People dare to say and to write things they wouldn't have done a couple of years ago," said Klein.

He points to the rise of the Alternative for Germany (AfD) party, saying its leaders are pushing red lines, attacking Germany's culture of remembrance. The AfD is widely considered a xenophobic party and won 94 seats in the 2017 election, making it the third-largest party in the Bundestag.

Germany's commitment to confronting its Nazi past and the horrors it produced are everywhere to be seen in the capital, from the little brass "stumbling blocks" in the ground that will tell you the story of a person or family sent to their death by the Nazi regime … to the imposing monument to Europe's murdered Jews on the door step of the Bundestag in Berlin.

The AfD appeals to Germans who say they're tired of atonement, effectively trivializing the Holocaust.

In 2017, one senior member of the AfD called for a "180-degree turn" away from Germany's culture of remembrance, decrying what he said was Germany's mental state of "a totally defeated people."

A year later, the AfD chief, Alexander Gauland, told a meeting of the party's youth wing that Hitler and the National Socialists were "just bird shit in 1,000 years of successful German history."

"What I can tell you is many people want the good and the genuine patriotism back in Germany where you can be proud to be German," said Vadim Derksen with the AfD's "Young Alternative," a youth faction of the party just recently put on a potential extremist watch list by Germany's domestic intelligence service.

Derksen accuses immigrants of importing anti-Semitism from the Middle East and countries at odds with Israel, blaming the federal government for allowing more than a million Syrian refugees into the country back in 2015.

"The biggest issue for me is especially in the Muslim religion. [Start] there if you want to fight anti-Semitism."

"When you see the criminal statistics in Germany, particularly the refugees who came here only recently did not commit many anti-Semitic crimes.

"When we talk about anti-Semitism emanating from Muslim communities it is largely committed by people who have been here a long time." 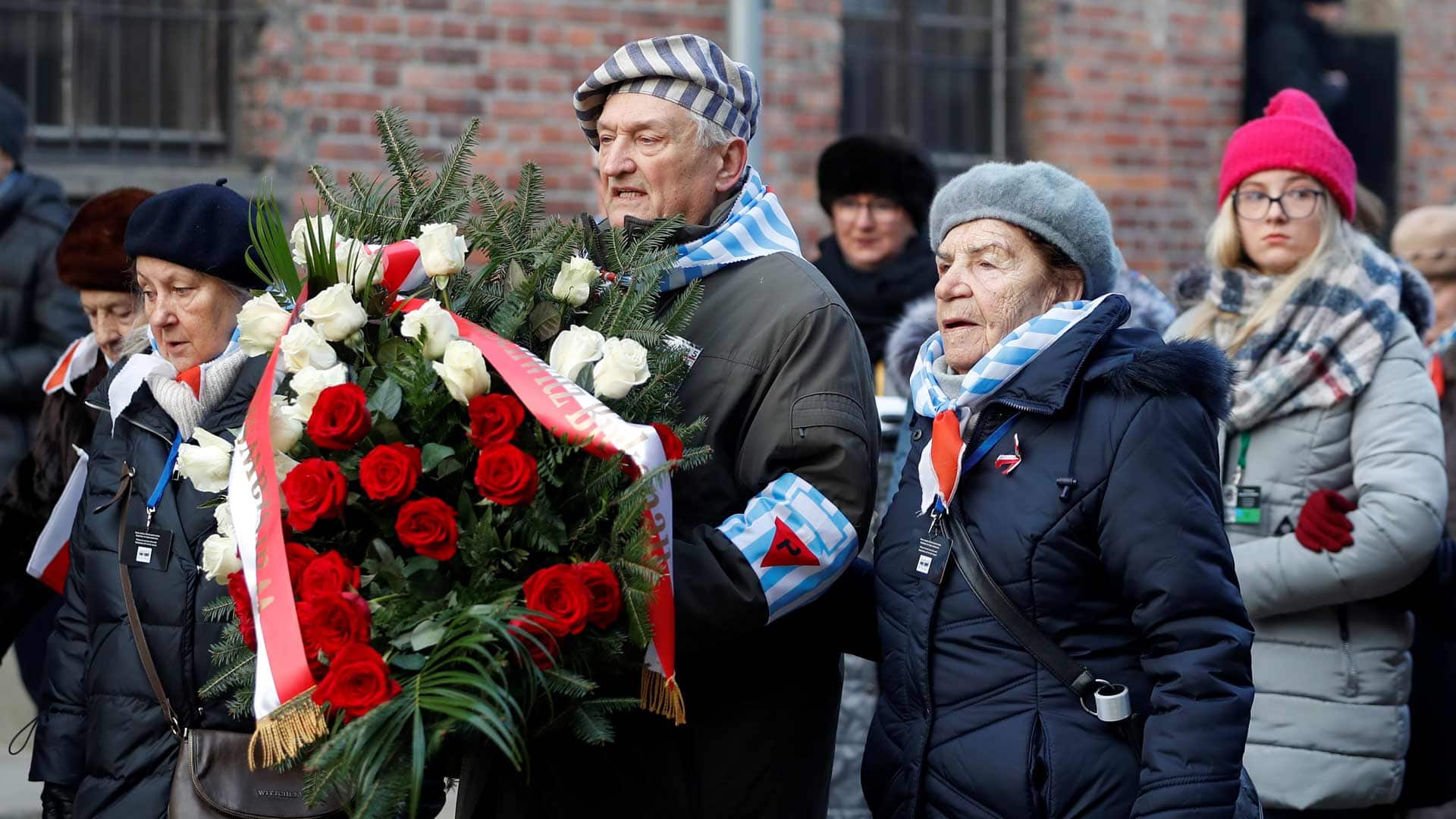 1 year ago
2:01
On the 75th anniversary of the liberation of Auschwitz, survivors returned to the death camp where more than a million people were killed. 2:01

Many members of the German Jewish community say they are worried about what they report to be a spike in attacks or harassment of Jews by Muslim extremists.

"One is that there is an extreme right party in Germany making it difficult for the Jewish community," Königsberg said in reference to the AfD, "trying to turn off the culture of memory here, trivializing the Holocaust."

"And the other is that extremist Muslims area also attacking the Jewish community here more aggressively."

The AfD's claim to be a protector of the Jewish community, he dismisses as nonsense. "This party transports hate against Muslims," he said.

"And if you hate one minority you hate other minorities. We will not let ourselves be used as cover for their hatred."

Some experts worry that the debate over the attitudes of immigrants from the Middle East is a distraction from the real issues.

Fabian Wichmann works for a charity called EXIT, which helps members of the far right leave groups or gangs and the ideology if they want to.

"We have anti-Semitism [in] different sub-cultures and groups and ethnic groups," Wichmann said.

"We know. But we have to recognize that there is a stable set of prejudices against Jews and anti- Semitic ideas out of our major population."

Levit, who moved to Germany with his parents from Russia when he was eight, says he grew up without experiencing anti-Semitism in Germany until he was 22. That was a decade ago.

"I was invited to a dinner and a gentleman in his mid-40s told me that I belong to a group of people who were not supposed to live in Germany anymore.

"I didn't have the tools to react because I had no experience, but it left a wound in me which never healed," Levit said.

On a small table beside Levit's piano and next to a figurine of a cat, there is a little sculpture of an inverted B, small enough that you might miss it.

The International Auschwitz Committee, awarded it to Levit earlier this month in recognition of the spirit of the Auschwitz survivors and their mantra of "never again."

The B matches the shape of the B in the infamous sign above the gates at Auschwitz that reads "Arbeit Macht Frei" (Works Sets You Free).

It is said that the prisoners forced to make the sign inverted the letter as a form of defiance. Levit says the award is overwhelming.

"To receive this honour on the 75th year for the liberation of Auschwitz, from these people, leaves me speechless." Although not for long.