Trading resumed at the main market in Burkina Faso's capital Saturday and residents returned to the streets, a day after Islamic extremists attacked the French Embassy and army headquarters in simultaneous assaults, killing eight people and wounding more than 80 others.

Trading resumed at the main market in Burkina Faso's capital Saturday and residents returned to the streets, a day after Islamic extremists attacked the French Embassy and army headquarters in simultaneous assaults, killing eight people and wounding more than 80 others.

Security forces killed eight militant attackers, and several arrests were made, but the violence is a perilous reminder that Ouagadougou remains a target.

The smell of smoke lingered over the city Saturday as the prime minister prepared to meet with the army chief at the heavily reinforced and guarded army headquarters. A deep hole in the ground and adjacent wall mark where extremists dressed in uniform set off a car bomb, apparently targeting a room where senior officers were to have met, but had relocated, according to Security Minister Clement Sawadogo.

The room was completely destroyed and the car's parts scattered inside the headquarters. Sawadogo said if the meeting had taken place in that room, "our army would have been beheaded."

In an address to the nation Saturday, Burkina Faso President Roch Marc Christian Kaboré honoured the victims and said nothing could justify the "senseless persecution" of the country, its institutions and population. He urged the public to collaborate more closely with the armed forces.

"In this difficult moment I want to reaffirm to Africa and to the whole world my unassailable faith in the ability of the Burkinabé people to preserve their dignity and put up a strong resistance to its enemies both inside and outside," he said.

French ambassador to Burkina Faso Xavier Lapeyre de Cabanes said both nations were targeted, referencing the two attacks that a Mali-based affiliate of al-Qaeda, Jama'a Nusrat ul-Islam wa al-Muslimin, claimed responsibility for the attacks on Saturday, reportedly in retaliation for the death of one of its leaders in a recent raid by French forces.

"The symbol is very strong, it means that the terrorists are trying to divide us and of course that will not happen," he said.

"Our objective remains that of standing by Burkina Faso in this war against terrorism."

Retired soldier Amado Belem told The Associated Press he is unhappy about the assault.

It's a big shock to know that the army has been attacked so easily. It makes me crazy," he said.

This is the third attack by Islamic militants on this city since January 2016, prompting criticism of the military.

No group has yet claimed responsibility for Friday's attacks.

People on Saturday flocked around the headquarters and the French Embassy to view the damage. A burned out car, remained in front of the embassy, which is riddled with bullet holes.

The embassy came under attack around 10:15 a.m. local time Friday, with witnesses at the nearby state TV offices telling The Associated Press that the attackers arrived in a pickup truck, shouted, "Allahu akbar!" and began shooting.

No one in the embassy was hurt, but a gendarme and the four attackers were killed, French Foreign Minister Jean-Yves Le Drian said in televised remarks.

"The situation is serious. You see … we thought it was just tear gas being fired in … the French Embassy, but it was real bullets that were killing. People ran to the Prime Minister's office. All day it was like this," said Sylvain Some, who works at a stand near the embassy. "I'm not content because there are a lot of wounded and dead. Truly, I'm not OK with this."

The attack at the army headquarters started shortly after the embassy assault and both were under control by 3 p.m., he said. 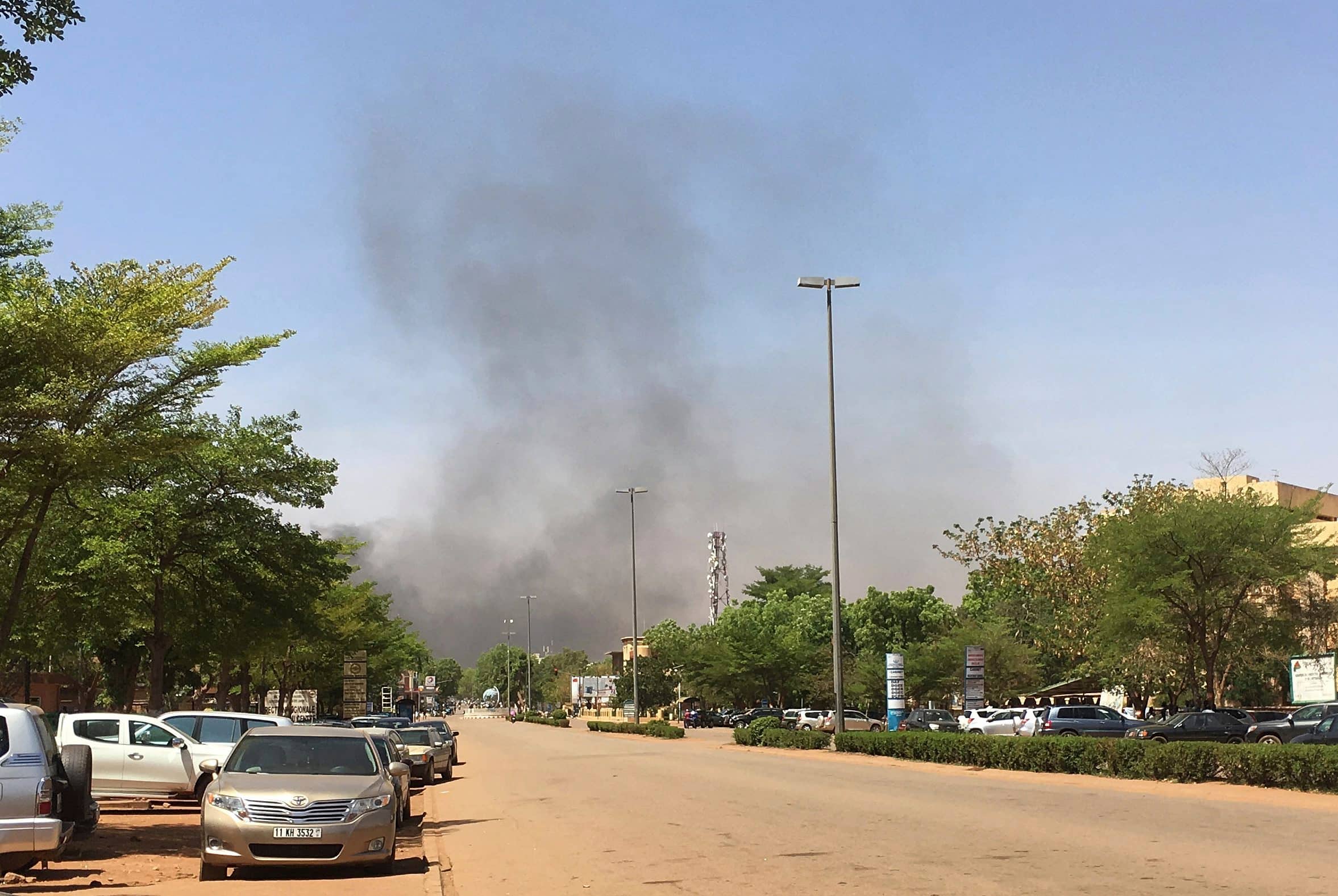 3 years ago
0:39
Armed assailants attacked many targets in Burkina Faso's capital on Friday. A government statement said there were still no details on any civilian casualties 0:39

Among the dead, is Col. Djibril Lalle, a senior army officer, who was the director of studies and planning at the Ministry of Defence and who was a former governor of the Sahel region, Sawadogo said.

The landlocked nation of Burkina Faso is one of the poorest countries in the world. It shares a northern border with Mali, which has long battled Islamic extremists. Attacks have spread into Burkina Faso, and a local extremist group has also gained momentum, attacking troops and civilians.

Islamic extremists have carried out two large-scale attacks on Ouagadougou in recent years, killing 30 people at a popular cafe in 2016 and 18 others at a Turkish restaurant in August 2017. Both times security forces have struggled to contain the violence, waiting for hours before intervening at the scene. In Friday's attack the military responded quickly.

Various extremist groups have also vowed to step up the bloodshed in response to the recent deployment of the G5 Sahel force. The 5,000-member force combines troops from Burkina Faso, Mali, Niger, Chad and Mauritania, with France leading the efforts to raise international funding.​