Save the Children suspends operations in Afghanistan after deadly attack

Militants stormed the offices of Save the Children in eastern Afghanistan on Wednesday, killing four people and triggering a shootout with police that lasted almost 10 hours, provincial officials and the organization said.

At least 4 dead, 26 wounded in attack carried out by multiple suspects 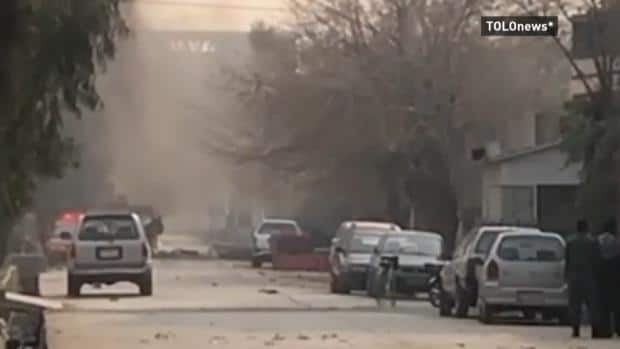 Save the Children office attacked by militants in Afghanistan

Militants stormed the offices of Save the Children in eastern Afghanistan on Wednesday, killing four people and triggering a shootout with police that lasted almost 10 hours, provincial officials and the organization said.

The Islamic State in Iraq and Syria (ISIS) claimed responsibility for the attack in Jalalabad, the capital of Nangarhar province.

The assault started with a suicide bomber who detonated his explosives at the provincial offices of Save the Children, a non-governmental organization, said Attahullah Khogyani, spokesperson for the provincial governor.

He said police killed two other attackers, and that at least 26 people, including six police officers, were wounded.

After eight hours, the fighting subsided and Khogyani said he initially thought it was over, but then the shooting picked up again.

Save the Children said in a statement that three of the organization's staff members died as a result.

ISIS said it was behind the attack. In a statement on its Aamaq media arm, the militant group said one of its suicide bombers with an explosive-laden vehicle and a subsequent raid targeted "British and Swedish foundations and Afghan government institutes."

Both the Taliban and ISIS are active in eastern Nangarhar province.

Zabihullah Zemarai, a member of the provincial council in Nangarhar, said police forces managed to rescue more than 40 people, mostly employees of the Save the Children group as the attack unfolded.

Monica Zanarelli, the International Committee of the Red Cross's head of delegation in Afghanistan, said an attack against an organization that helps children is "outrageous."

"Civilians and aid workers must not be targeted," she said in a statement. "Increased violence has made operating in Afghanistan difficult for many organizations."

The attack follows a deadly weekend siege of the Intercontinental Hotel in the capital Kabul in which 22 people were killed, including 14 foreigners. Multiple U.S. citizens were killed and injured in the Taliban's 13-hour siege of the hotel, the State Department said Tuesday.

Eleven of the 14 foreigners had been previously identified as working for the private Afghan airline KamAir. During a ceremony at Kabul's airport Wednesday the bodies of seven Ukrainian citizens were handed over to officials for transfer to Ukraine.

Mirwais Samadi, head of the consulate department of the Afghanistan Foreign Ministry, said the attack was launched by "terrorists" and their supporters.

"Some of our countrymen were martyred and some foreign nationals also were killed," he said. "We express our condolences and thoughts to the victims and families."

In eastern Ghazni province, meanwhile, four Afghan police were killed after their checkpoint came under attack by insurgents, said Arif Noori, spokesman for the provincial governor.

Six insurgents were killed and three were wounded in the battle, which took place early morning Wednesday in Dayak district, said Noori.