A video distributed by the Trump administration to support its argument for banning CNN reporter Jim Acosta from the White House appears to have been doctored to make Acosta look more aggressive than he was during an exchange with a White House intern, an independent expert said Thursday.

A video distributed by the Trump administration to support its argument for banning CNN reporter Jim Acosta from the White House appears to have been doctored to make Acosta look more aggressive than he was during an exchange with a White House intern, an independent expert said Thursday.

White House Press Secretary Sarah Sanders tweeted the video, which shows Acosta asking a question to U.S. President Donald Trump on Wednesday as the intern tries to take his microphone away. But a frame-by-frame comparison with an Associated Press video of the same incident shows that the one tweeted by Sanders appears to have been altered to speed up Acosta's arm movement as he touches the intern's arm, according to Abba Shapiro, an independent video producer who examined the footage at the AP's request.

We stand by our decision to revoke this individual’s hard pass. We will not tolerate the inappropriate behavior clearly documented in this video. <a href="https://t.co/T8X1Ng912y">pic.twitter.com/T8X1Ng912y</a>

Here is the original video from the news conference: 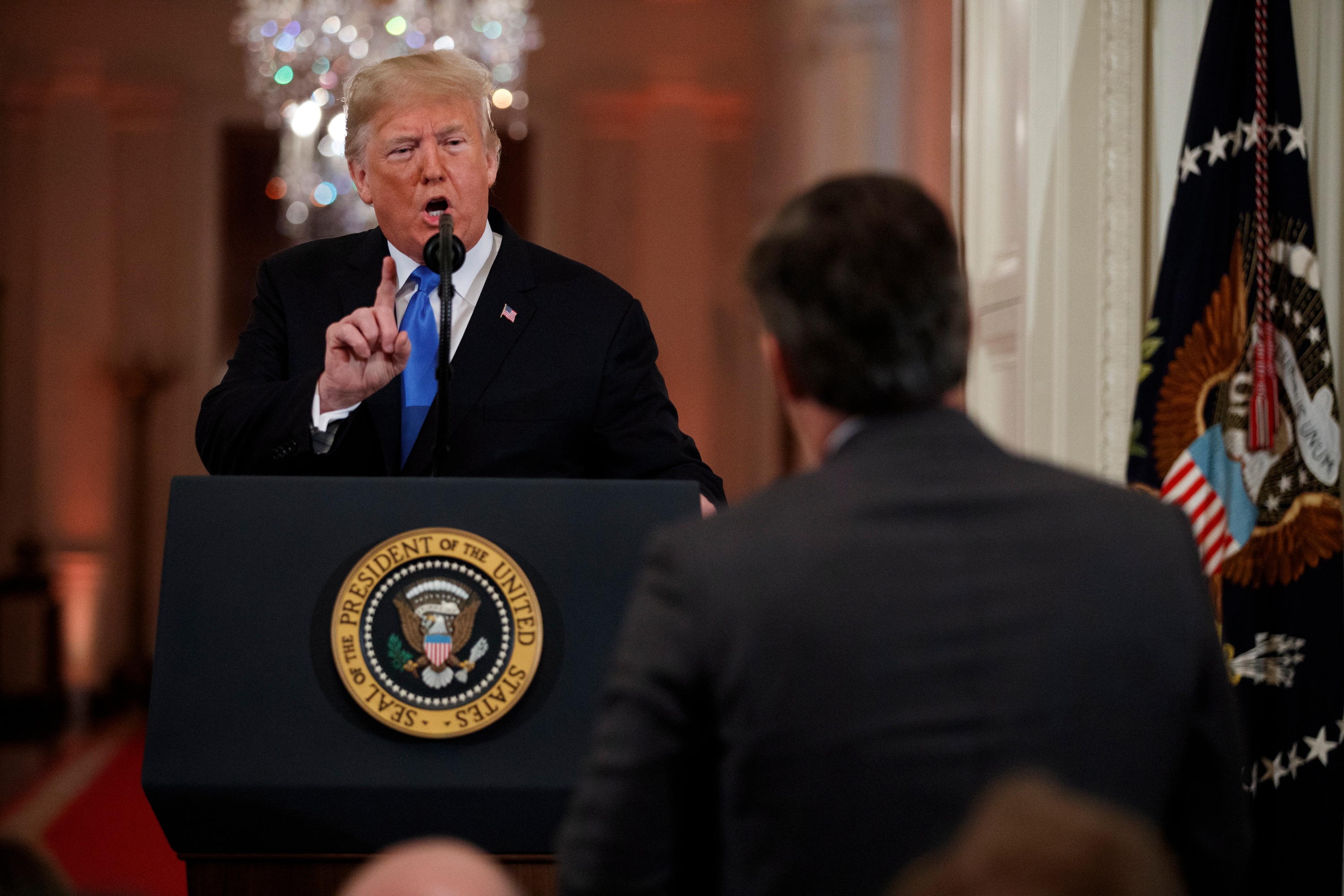 2 years agoVideo
0:34
The White House suspended CNN reporter Jim Acosta's press pass after accusing him of "placing his hands on a young woman just trying to do her job as a White House intern" during an exchange with Trump. 0:34

Shapiro noticed that frames in the tweeted video were frozen to slow down the action, allowing it to run the same length as the AP one.

The alteration is "too precise to be an accident," said Shapiro, who trains instructors to use the software. The tweeted video also does not have any audio, which Shapiro said would make it easier to alter.

Sanders, who has not said where the tweeted video came from, said it clearly shows Acosta made contact with the intern.

While the origin of the manipulated video is unclear, its distribution marked a new low for an administration that has been criticized for its willingness to mislead.

The White House News Photographers Association decried the sharing of the video.

"As visual journalists, we know that manipulating images is manipulating truth," said Whitney Shefte, the association's president. "It's deceptive, dangerous and unethical. Knowingly sharing manipulated images is equally problematic, particularly when the person sharing them is a representative of our country's highest office with vast influence over public opinion."

"The irony of this White House video involving Jim Acosta is that if it is found to be doctored, it will show the administration to be doing what it accuses the news media of doing — engaging in fake information," said Aly Colon, a professor in journalism ethics at Washington & Lee University.

'Enshrined in the First Amendment'

CNN has labelled Sanders' characterization of Acosta's exchange with the intern a lie. Its position has been supported by witnesses including Reuters White House correspondent Jeff Mason, who was next to Acosta during the news conference and tweeted that he did not see Acosta place his hands on the White House employee. Rather, he said he saw him holding on to the microphone as she reached for it.

"It is the essential function of a free press in every democracy to independently gather and report information in the public interest, a right that is enshrined in the First Amendment," said Julie Pace, AP's Washington bureau chief. "We strongly reject the idea that any administration would block a journalist's access to the White House."

The New York Times editorialized in favour of restoring Acosta's pass, saying it signaled Trump's view that asking hard questions disqualifies reporters from attending briefings. The newspaper said that if Sanders was so offended by physical contact, "what did she have to say when her boss praised as 'my kind of guy' Rep. Greg Gianforte of Montana, who was sentenced to anger management classes and community service for body-slamming a Guardian reporter last spring?"

It's unusual for the White House to pull the so-called hard passes from journalists. During Lyndon Johnson's presidency, the Secret Service denied clearance to Robert Sherrill, a reporter for The Nation who had gotten into physical fights with government officials. During the George W. Bush presidency, Trude Feldman, who worked for various news outlets, was suspended for 90 days after security cameras recorded her looking through a press aide's desk late one night. In the 1970s, President Nixon tried to get Washington Post reporters banned from the White House.

Ari Fleischer, White House press secretary under George W. Bush, said on Fox News Channel Thursday that it appeared Acosta had made incidental contact with the intern and that it didn't appear to be a justifiable reason to pull his pass.

Despite losing his White House pass, Acosta is expected to travel to Paris this weekend to cover Trump's trip to meet with world leaders.