Abu Sayyaf has 25-year record of kidnappings and bombings

The Filipino militant group Abu Sayyaf purports to want to establish an Islamic state in the southern Philippines, but for the past 25 years it has been carrying out a campaign of bombings and kidnappings for ransom. 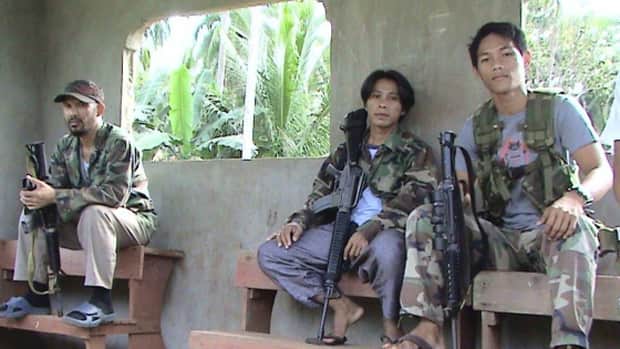 5 years ago
6:02
Group believed to be holding hostages including Canadian Robert Hall, is not a terrorist organization, says Zachary Abuza 6:02

Abu Sayyaf is a militant group whose leadership swore allegiance to the Islamic State in 2014.

Ostensibly its mandate is to establish an Islamic state and Shariah law in the southern Philippines areas of Mindanao and the Sulu Archipelago. Since its inception, the group has carried out a campaign of kidnappings, bombings and extortion as well as conflict with the Filipino military.

Four hostages, including two Canadians, were kidnapped last September and held by the Abu Sayyaf militants. Canadian Prime Minister Justin Trudeau confirmed the killing of one of the hostages — former Calgarian John Ridsdel — on Monday.

Kidnapping on the rise

While Abu Sayyaf has used kidnapping for ransom to fund its activities for years, there also has been a dramatic increase in kidnappings worldwide by terrorist groups, with more than 1,000 people taken in 2015, a 29 per cent increase from the year before, said William Braniff, executive director of the National Consortium for the Study of Terrorism and Responses to Terrorism, a research group at the University of Maryland.

That figure includes the hostage-taking at the Bataclan club during the Paris attacks in December, as well as the Boko Haram kidnappings, in which many people are taken at once.

"It's a different form of creating a drama that captures media attention and holds it," said Braniff.

"They have a need for violent spectacle to attract the world's attention."

Canada, the U.S., Britain, Australian and the Philippines, among many countries, consider Abu Sayyaf to be a terrorist group.

Public Safety Canada says the group was formed in the 1990s and has had links to  al-Qaeda and Jemaah Islamiyah.

Other names it has been known by, according to Canadian authorities, include:

Australian security documents about the group say it is not cohesive, but a network of cells that carry out their own operations.

Its original leader, Abdurajik Abubakar Janjalani, a Filipino national who studied in Libya and Saudi Arabia, was killed in a gun battle with police in 1998. From the beginning, Abu Sayyaf carried out a campaign of bombings, mainly targeting Filipino nationals and the military.

Next to lead the group was Khaddafy Janjalani, a former member of the Moro National Liberation Front, an earlier separatist group, who had been trained in the Middle East. He was killed in 2006, but since then the leadership of the organization has been scattered, according to the Australians.

In July 2014, a video was posted online of Abu Sayyaf leader Isnilon Hapilon along with other masked men pledging allegiance to the caliph of an Islamic State.

"We pledge to obey him on anything which our hearts desire or not and to value him more than anyone else. We will not take any emir [leader] other than him unless we see in him any obvious act of disbelief that could be questioned by Allah in the hereafter," they say on the video.

Braniff believes the connection to the Islamic State of Iraq and Syria (ISIS) is a case of opportunism, rather than ideologically motivated.

While earlier leaders of Abu Sayyaf may have trained in Afghanistan, the current leadership is more interested in the kind of media exposure that a connection with IS can give the group, he told CBC News.

"What's happening is Islamic State [ISIS] is happily disseminating propaganda to celebrate the actions of the Abu Sayyef group," he said. "Islamic State has a great propaganda arm."

Abu Sayyaf claimed responsibility for the biggest act of terrorism in the history of the Philippines, planting a bomb on a passenger ferry in February 2004 and sinking the vessel, killing more than 100 people.

Much of the violence by Abu Sayyaf has involved bombings and shootouts with Filipino military. It also sought to undermine peace talks between the government and the Moro separatist movements.

The group raises money to fund its operations through kidnappings and extortion. Copying al-Qaeda and Jemaah Islamiyah, Abu Sayyaf often threatened to behead hostages if a ransom was not paid.

Among the group's recent actions:

About 90 per cent of the population of the Philippines is Christian and most Filipinos condemn the group. But it has a network of supporters among extended families in Mindanao's Jolo and Basilan regions, according a Stanford University study of the group.

The U.S. military's anti-terrorism task force in the southern Philippines was deactivated in February 2015 after 13 years, but U.S. forces continue to provide intelligence and training to Filipino troops in the south.

The U.S. now is engaged in "capacity building at various levels," in the Philippines, Braniff said.