Japanese centenarian Hidekichi Miyazaki set a fresh record as the world's oldest competitive sprinter this week, one day after turning 105, but said he was disappointed at falling short of his own personal best.

'It's all about being in good health,' says Hidekichi Miyazaki after running 100 metres in 42.22 seconds 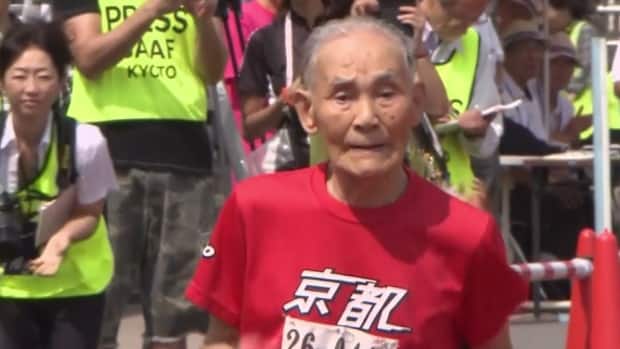 Japanese centenarian Hidekichi Miyazaki set a fresh record as the world's oldest competitive sprinter this week, one day after turning 105, but said he was disappointed at falling short of his own personal best.

"I wanted to shave off a few more seconds as I got 36 seconds while training," Miyazaki, wearing a bright red T-shirt and running shorts, said after completing his 100-metre heat in 42.22 seconds on Wednesday.

His personal record of 34.10, chalked up when he was 103, remains unbeaten for a centenarian.

Born on Sept. 22, 1910, Miyazaki was already eight when the First World War ended and 34 when Japan was defeated in the Second World War. He did not start running until he was in his 90s, taking up the pastime after many of the friends with whom he had played the board game Go had passed away, according to Guinness World Records.

Asked the secret of his success, Miyazaki said he exercised daily, ate in moderation and chewed his food properly.

"The doctors are all surprised. It's all about being in good health," he told reporters.

Japan, which on Monday marked Respect for the Aged Day, tops the world in number of people over age 65. For the first time, the number of people over 80 topped 10 million, with 60,000 of those being over 100 years old, according to a report issued by the Ministry of Internal Affairs this week.